The first round of winners is in from the opening of bids for California’s electricity Demand Response Auction Mechanism, or DRAM — the state’s first big attempt to bring distributed energy resources into service for the grid, from smart thermostats and EV chargers to behind-the-meter batteries and commercial-industrial load control.  Included is one that will involve smart electric vehicle chargers.

Winning bids include big commercial-industrial (C&I) projects from demand response companies such as EnerNOC, Johnson Controls-owned EnergyConnect andIPKeys/Power Partners. But they also include aggregated behind-the-meter batteries from startups Green Charge Networks and Stem — one of the first times batteries and demand response have competed head to head to provide grid services.

On the residential front, winning bids from Alarm.com’s EnergyHub and startupsOhmconnect and Chai Energy will aggregate hundreds, perhaps thousands, of homes equipped with smart thermostats. Finally, startup eMotorWerks will bring at least 1,000 smart electric-vehicle chargers into play, making it the only EV-related winner in the mix.

As we noted in the GTM Squared deep dive into the DRAM program, these bids represent some of the most valuable competitive information out there in the emerging world of the grid edge — the prices at which companies think they can make the most money, yet still beat the competition, with flexible, aggregated distributed energy resources (DERs).

Here are the lists of winners from each utility. 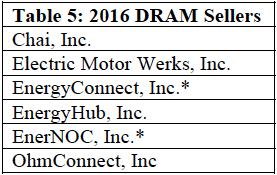