Renewables to provide 69 percent of new capacity by March 2021, as dozens of coal plants are retired

Solar and wind power was responsible for a remarkable 98 percent of all new U.S. power generation capacity that came online in the first two months of 2018.

According to the Federal Energy Regulatory Commission’s (FERC) latest “Energy Infrastructure Update,” the overwhelming majority of new power plants set up in January and February were renewable energy projects.

As FERC reports, during these two months, 1,568 Megawatts of wind and 565 MW of solar power capacity were put into service — along with just 40 MW of natural gas.

While President Trump and Energy Secretary Rick Perry have been promoting policies that favor fossil fuel generation over renewables, FERC reports that most of the big new renewable energy projects came online in states that voted for Trump.  These projects include the 170 MW Beaver Creek Wind Project in Iowa, the 168 MW Prairie Wind Project, also in Iowa, and the 81 MW Stuttgart Solar Project in Arkansas.

The stunning and ongoing price drops in solar and wind have shifted the economics  of new generation away from fossil fuels.

Things are only going to get tougher for gas and coal compared to renewables.

Indeed, FERC also projects that renewables will keep dominating the market for new power generation over the next three years, while coal power plants will keep being shuttered for the foreseeable future.

Meanwhile, FERC reports that over the next three years, 70 coal power units will be  shut down while only 5 new ones are expected to be added. Net coal generation will drop by more than 15,000 MW.

The coal and nuclear industries have been wooing both Trump and Perry to get an emergency intervention, which is to say, a massive bailout.

But whatever the Administration does in the short term, the global shift toward cheaper, cleaner energy is unstoppable.

When Hurricane Maria hit Puerto Rico, it wreaked havoc on the aging electrical grid supporting the island, taking out power for island residents for months for many. Many new energy companies like Tesla, sonnen, and Sunrun championed a charge into the country in an effort to restore power to the country by installing bundled solar + storage systems for critical service providers around the island.

We sat down with Sunrun’s Senior Director of Business Development, Nick Smallwood, to talk about the work Sunrun has done and continues to do to help the Caribbean island rebuild its electrical grid with modern, renewable technology. 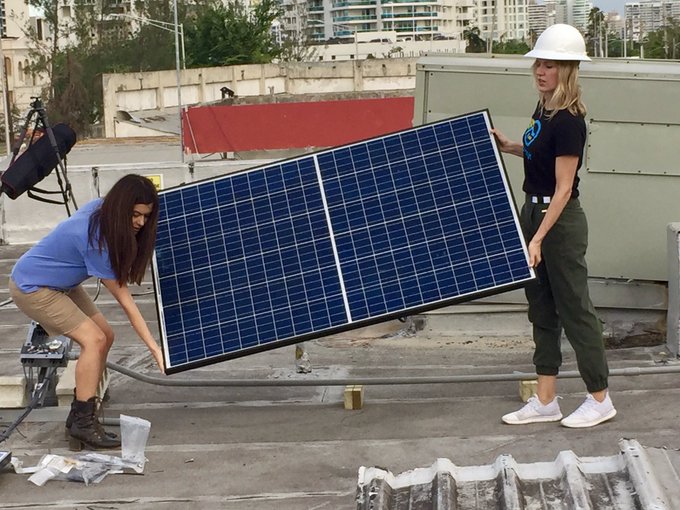 Sunrun partnered with Empowered by Light to install solar + storage microgrid systems in Puerto Rico that would ensure the stations would be able to continue operations even in the event of a power outage. The 3 installations are comprised of 6.6kW worth of REC 275-watt panels which have been paired with a bank of Outback Power lead acid batteries. These batteries differ from the lithium ion products typically used in Sunrun’s installations in the mainland United States but are commonplace in Puerto Rico due to their lower cost and higher availability.

To install the systems, Sunrun designed and shipped the components and coordinated the installation of the systems with local resources doing the actual installs on-site.

Sunrun doesn’t do business in Puerto Rico, so the experience was chock full of learnings including one that surprised the Sunrun team:  Puerto Rico was an island full of solar experts. The average income in Puerto Rico is only $19,518, which has forced the population to become experts in energy pricing, energy efficiency and…it turns out…solar pricing.

This focus, coupled with the cost competitiveness of solar, has resulted in a booming industry for rooftop solar (with 11,000 existing rooftop solar installations) but the vast majority of these systems were not coupled with any local storage when they were installed. Since the widespread power outages caused by Hurricane Maria, demand for solar + storage installations in Puerto Rico has boomed, as well as a new focus on adding local energy storage to homes with existing solar installations.

On the installer side, Sunrun partnered with a reputable local construction company that already had a large renewables arm. Yet again, the Sunrun team was pleasantly surprised with what they found when looking for local partners to execute the installations. Nick related that, “There is a level of sophistication with local installers that you don’t even see in some states here in the mainland.”

Only a few weeks after the installations were completed, the systems were put to the test in a real life situation when power to the entire island went out again for more than 24 hours. Sunrun confirmed via Twitter that the power was indeed still on at the fire stations where the solar systems were installed after Hurricane Maria. 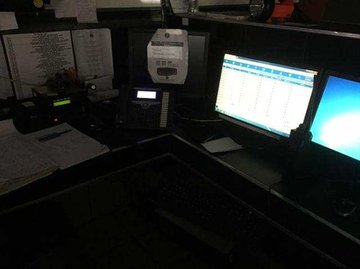 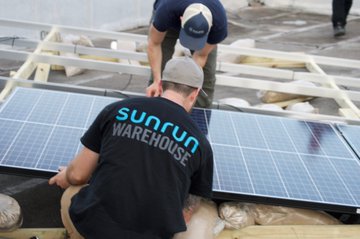 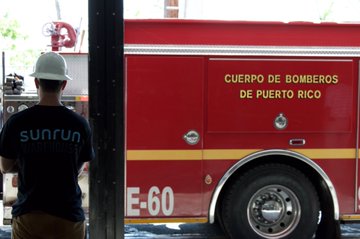 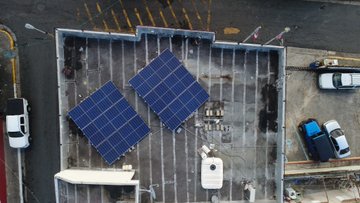 Confirmed that @Sunrun #solar & batteries were providing backup power 24/7 at the Metro Fire Station in San Juan through the recent blackout. This dispatch office is responsible for hundreds of thousands of people. Hoping the rest of the island gets power back soon #PuertoRico 10:49 AM – Apr 19, 2018

Looking to the future, Sunrun has committed to installing 8 microgrid systems in total in Puerto Rico and sees that as just the beginning of a much longer process of leveraging its expertise in renewables to restore power to the island. “We are going to be around [Puerto Rico] for the long haul.”

The failure of the existing grid highlighted an island in crisis as the territory declared bankruptcy early in 2017 and was operating under the governance of a financial oversight board. The trauma of the hurricane not only took down power to the island of Puerto Rico, it also completely severed the underwater connection that was the sole source of power for two of Puerto Rico’s smaller islands to the east, Vieques and Culebra.

With an estimated time to repair of four years, a Request for Proposals was put out by the Puerto Rico Electric Power Authority (PREPA) to look for solutions that could offer alternative options to power up the smaller islands. That effectively opens the door for renewables to swoop in and prove not only their cost-competitiveness, but their capability to truly replace fossil fuel-fired generation for entire islands.

The transition to a more resilient electric grid will not be smooth, easy, fast or peaceful. Fossil fuel companies, utilities, power plant operators, and those fearing change — fearing the future — always push back. But what Hurricane Maria and the damage she wreaked in Puerto Rico have made clear is that renewables do offer more resiliency. They do offer the same electricity at a lower cost. On top of that, they don’t pollute.

These are the reasons Sunrun was started in the first place, and Nick shared that Sunrun sees the current rebuilding of the grid as a pivotal moment for Puerto Rico, “It’s a really good opportunity for the people involved in Puerto Rico to be able to take control of their future and ensure that whatever emerges from it is something that is beneficial for everyone involved and that it is a resilient solution.”

On Earth Day, we released Transcending Oil: Hawaii’s Path to a Clean Energy Economy. This report, commissioned by Elemental Excelerator and independently conducted by Rhodium Group in partnership with Smart Growth America and Sudokrew Solutions, shows that the faster we transition off of oil:

To experience an interactive visualization and download the full report, head over to transcendingoil.com.

We share it with you in the spirit of collaboration, with the intention of informing rich conversations and supporting collective action (and with the not-so-secret hope that it may inspire you to jump in and start a company with an idea that just might change the world).

The idea for Elemental Excelerator was borne out of a landmark partnership called the Hawaii Clean Energy Initiative. In 2008, this partnership aligned state, federal, utility, business, and non-profit organizations that agreed we no longer needed to burn oil in an island chain with abundant natural resources.

We’ve made enormous progress — going from 6% renewable generation in 2008 to over 25% in Hawaii today. Just a decade ago, solar energy and electric vehicles were virtually nonexistent here. Now, in 2018, we have the most rooftop solar and the second most electric cars per capita in the nation. Hawaiian Electric, Kauai Island Utility Cooperative, Hawaii Energy, government agencies, and the private sector have implemented renewable energy and energy efficiency that has reduced greenhouse gas emissions totaling 2.5 million metric tons. That amounts to taking 160,000 cars off the road for a year. So, while it may not always feel like it, change is happening, and happening fast.

After this decade of acceleration, we recognized the need to explore what the increasing pace of technological and economic change will mean for Hawaii’s future. We commissioned independent energy and transportation analysts to dig into the numbers, gather insights from our community members, and assess what is possible.

We don’t think that one report can provide all the answers, but it can help inform our thinking and deepen our collective conversations. We learned that, contrary to conventional wisdom, Hawaii can save money by accelerating the transition off of oil. Here are two insights we found particularly interesting:

2. Transitioning from oil earlier creates good-paying jobs. The transition can create as many as 3,500 more jobs in Hawaii compared to what would occur by just meeting current targets (for scale, there are 2,700 auto mechanics in Hawaii). Clean energy jobs pay $3–7 per hour more than Hawaii’s median wage of about $20 per hour.

We have all the right ingredients, but artificial barriers stand in our way. For electricity, this includes misaligned financial incentives that keep utilities from benefitting from clean energy, outdated rules and systems that limit data access and transparency, and a lack of options for renters and residents of limited means who want greener choices. For transportation, the numbers show that we’re farther behind in getting off of oil. We will need to design neighborhoods that give families the freedom to get around without cars; increase choices for public transit, shared rides, electric vehicles, and biking; and work with other states and call on the federal government to uphold and strengthen vehicle efficiency standards.

Rather than being surprised by or unprepared for the changes to come, we have an opportunity now to take collective action and transition by design, not by default.

Why does this matter?

We embarked on this quest because we love our home. This is a place where people value long-term impact over short-term gain, treat neighbors as ohana rather than as strangers, and willingly embrace their kuleana to care for our islands that in turn care for us. We can be a beacon for the world and prove that it’s possible to decarbonize our economy. Technology and policy will play important roles, but what we’ve learned from the past decade is that it will take people working together even when they don’t always agree, organizations redesigning incentives to facilitate change, and leaders taking chances on innovative and unfamiliar ideas.

A 10-year-old already lives in a cleaner Hawaii today than she would have had we not started this journey in 2008. And she will work in a more prosperous Hawaii if we work together to accelerate toward clean energy over the next ten years.

As we learned as teenagers, the best way to gain control through the curves is to accelerate through them. The time is now.