About an hour away, in Rutland, homes and businesses along a once-distressed corridor are installing the latest in energy-saving equipment, including special insulation and heat pumps.

And throughout Vermont, customers are signing up for a new program that will allow them to power their homes while entirely disconnected from the grid.

The projects are part of a bold experiment aimed at turning homes, neighborhoods and towns into virtual power plants, able to reduce the amount of energy they draw from the central electric system. But behind them are not green energy advocates or proponents of living off the land. Instead, it’s the local electric company, Green Mountain Power. 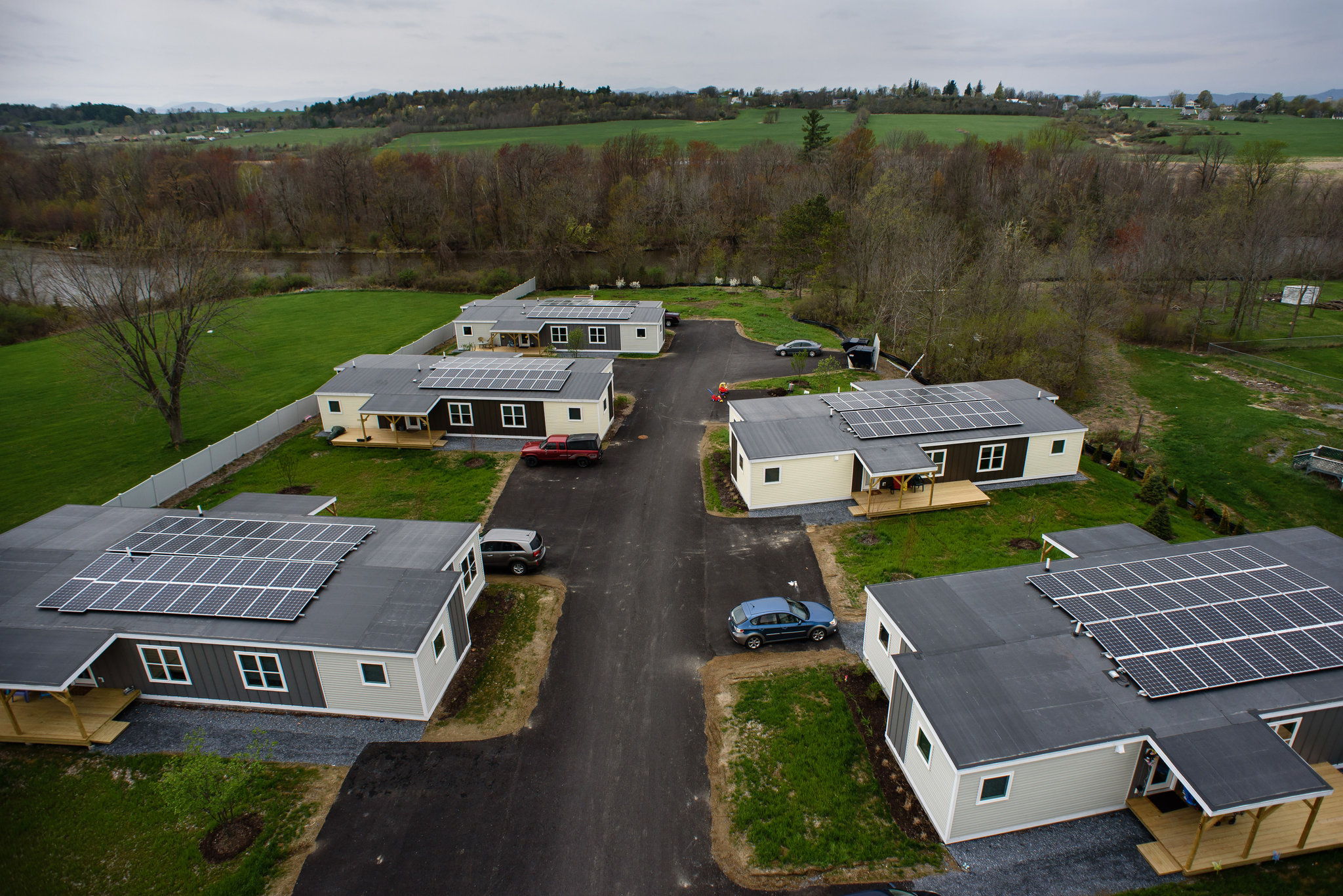 Each unit of the McKnight Lane development in Waltham, Vt., has solar panels installed on the roof.CreditJacob Hannah for The New York Times

Even as the Trump administration has broken with almost all the world’s nations by renouncing the Paris climate accord, the Vermont program offers just one example of the continuing efforts at the local level to rethink a largely carbon-based power system. The initiatives are driven by financial advantages as well as environmental ones.

“Customers, especially in Vermont with the energy-independence values that people have, want to move more toward self-generation,” she said, seated in a bright orange modernist chair in a meeting area in the company’s open-plan headquarters near Burlington. 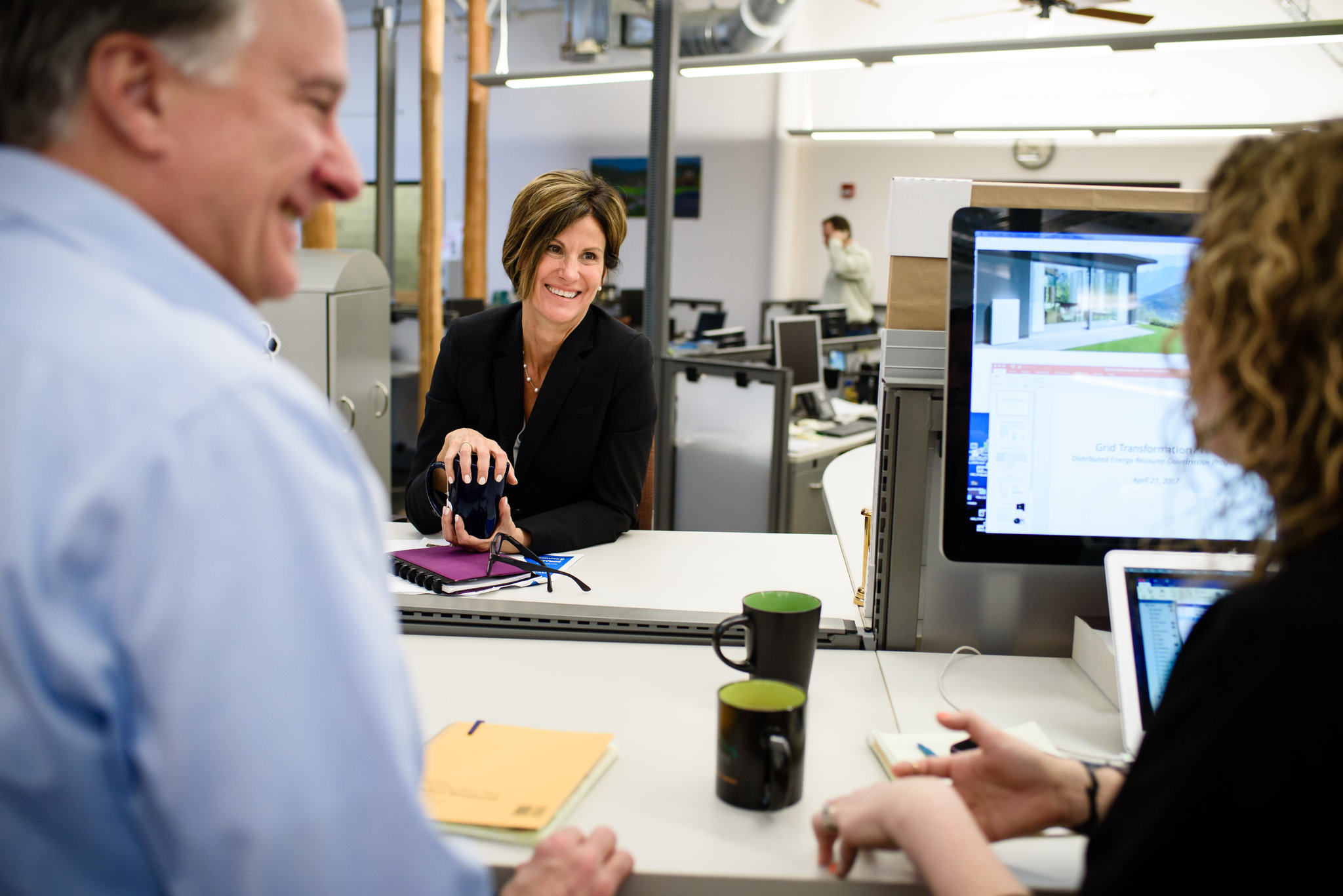 Mary Powell, center, president and chief executive of Green Mountain Power, with two other executives at the utility, Robert Dostis and Kristin Carlson. CreditJacob Hannah for The New York Times

As a practical matter, the less electricity the utility pulls from the regional transmission system, especially at times of peak demand, the less it has to pay in fees, producing savings it can pass on to customers. One way it does this is by remotely controlling the batteries installed through its programs, drawing upon the stored energy as needed.

Recently, Ms. Powell said, Green Mountain used this method to take the low-income development here off the grid’s electricity supply for two hours, saving an estimated $275 in transmission costs while the homes were powered by solar panels or battery storage. The amount saved was small, but such savings could add up over a year if they were realized in enough locations.

The utility, owned by Gaz Métro, a leading natural gas distributor in Quebec, is also working to reduce its carbon dioxide emissions as part of the effort to slow global warming. In 2014, it became a B Corporation. That is a voluntary designation, requiring executives to take into account not just how decisions will affect profit and shareholders, but also how they will affect the public, generally defined as society or the environment.

As part of that mission, Green Mountain became the first utility to offer customers access to Tesla’s Powerwall home battery system when it was released in 2015. Now it is starting a new program, announced in May, that will offer the battery to as many as 2,000 customers for $15 a month over 10 years, or a one-time payment of $1,500. The package will include software and a Nest thermostat, which conserves electricity by adjusting temperatures to comings and goings as well as established routines. 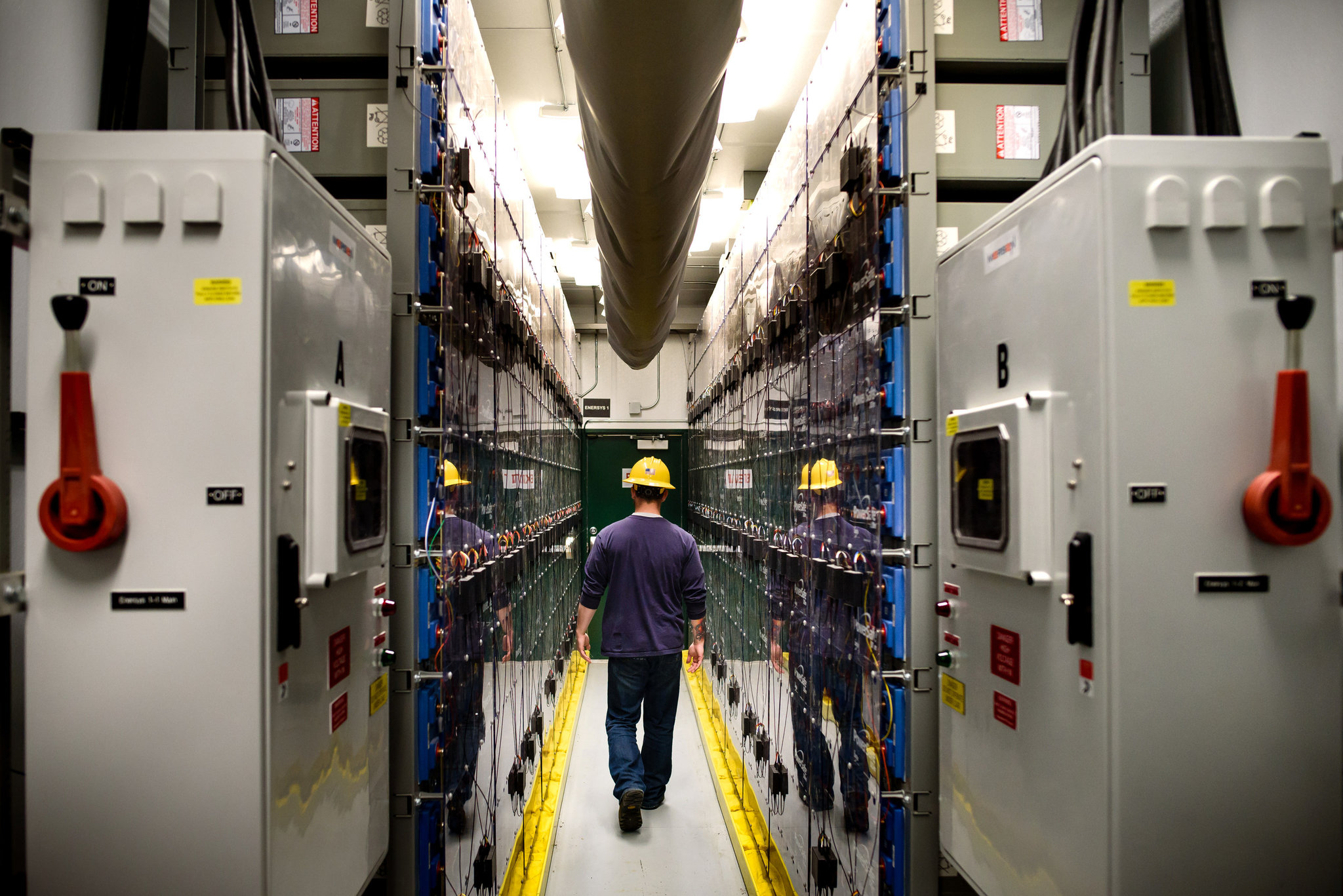 The idea is that customers, especially when they have solar panels, heat pumps and electric vehicles, will be better able to monitor and manage their energy use. The utility, using Tesla’s software, will be able to call upon the stored energy in the combined batteries to help meet surges in demand, or to sell it on the wholesale market to help balance or smooth out fluctuations within the region.

The efforts have won plaudits from national green-energy advocates who see the utility as a leader in helping redesign the electric system, which is undergoing enormous changes as renewable sources of energy become more popular and other technologies give customers more control. Many utilities see such moves as an existential threat because their profits come mainly from getting a set rate of return that is factored into customer rates.

But Green Mountain Power has “figured out a way to do well and do good in the utility business and keep its regulators, investors and customers all happy at the same time,” said Dan Reicher, executive director of the Steyer-Taylor Center for Energy Policy and Finance at Stanford and a customer of the utility through a family home in Vermont. “That’s a big deal these days when the rest of the industry is talking about a death spiral.”

Ms. Powell, 56, grew up on the Upper West Side of Manhattan and attended a public high school focused on the arts. She came to the company in 1998 after turning down the job three times. She just couldn’t see herself working for a utility, she said, especially one whose traditional corporate culture was visible in the imposing stone lobby and slate steps that led to the chief executive’s office, hidden behind two private secretaries and outfitted with its own bathroom and shower.

The family on her father’s side — he was an actor and a model for the fisherman on Gorton’s seafood packages — had roots in the state, so she had grown up spending summers there. (Her brother, Michael Powell, is a sports columnist at The New York Times.) After college, she became a technical writer for a money-market fund in New York, working her way up to associate director of operations over the next seven years. 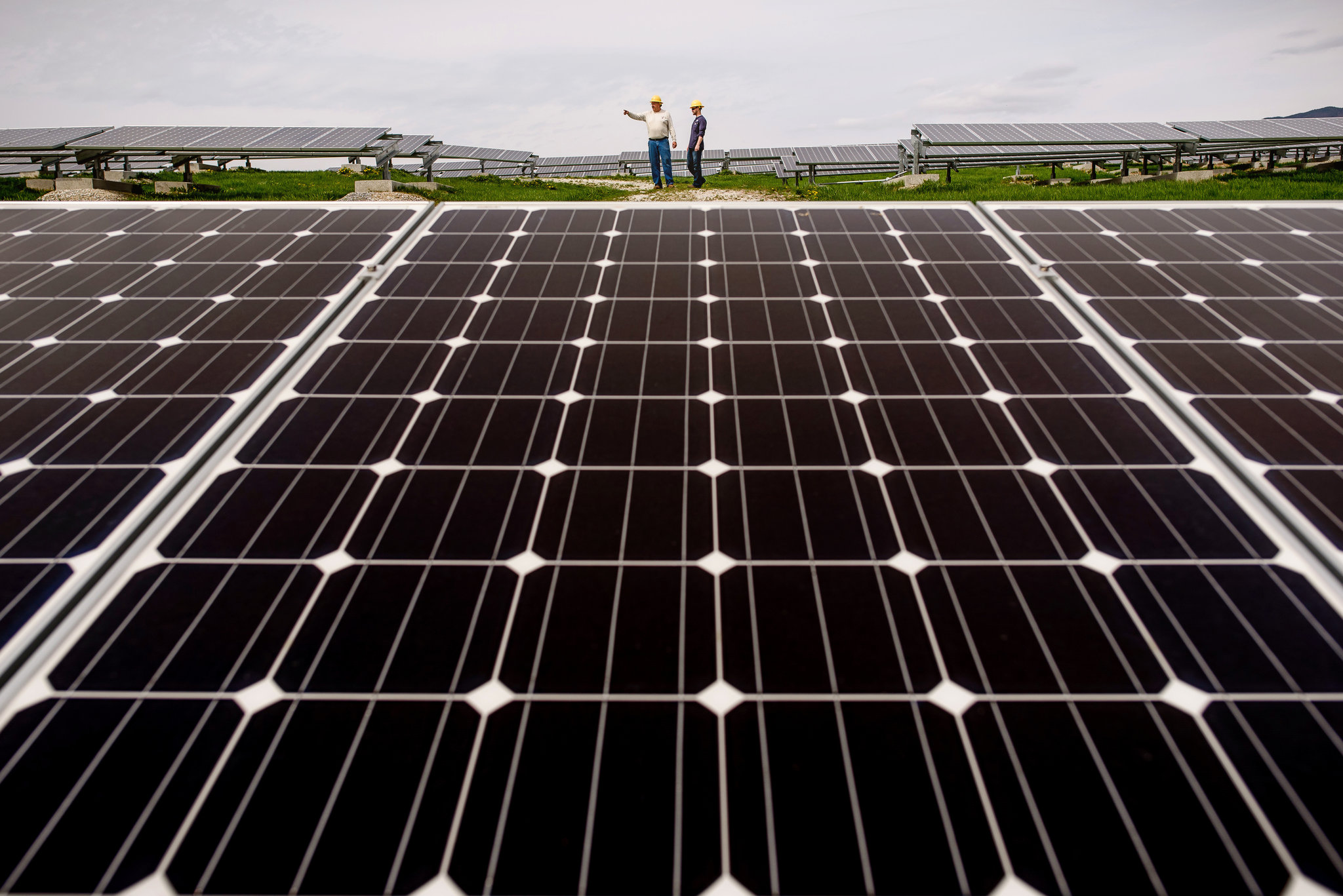 The Stafford Hill Solar Farm was built at a landfill site in Rutland. CreditJacob Hannah for The New York Times

She grew disenchanted with working in finance, so when a house-sitting opportunity in Vermont came up, she and her fiancé quit their jobs and headed north. She figured she would work as a waitress, she said, but ended up taking jobs at a couple of banks and starting a few businesses — including one selling reflective gear for dogs that her husband now runs — that ultimately led to her joining the utility.

First, she tackled the company culture, moving executives from the boxy glass headquarters to the 1980s brick service center, where she works at a stand-up desk in a cluster including other executives as well as the linemen. The office, decorated with reclaimed wood, bright colors and relics of past electric systems, looks more suited to a Silicon Valley start-up than to a typical corporate utility, complete with a treadmill and table-tennis setup in one section and a cluster of fledgling entrepreneurs, winners of an incubator competition, in another.

Then she began trying to make the generating system greener, which led to the move toward a more decentralized system, something few other utilities have tried with such enthusiasm. But in an industry known for caution, Green Mountain can be nimble, in part because it is so small — just 265,000 customers — and has a relatively receptive customer base.

A program that helps provide energy-efficiency upgrades in Rutland, for instance, got its start with a single call. At a weekly leadership team meeting, Ms. Powell asked executives to find a way to bring several technologies together in one dwelling.

One executive asked Rutland’s mayor if he knew of a family that would be willing to serve as a guinea pig. He suggested Mark and Sara Borkowski, whose century-old house became the first of 161 homes and businesses to take part. Under the program, the utility provides financing for energy upgrades, which participants can pay back over time through their monthly bills.

Green Mountain has still invested in large-scale renewable-power plants, like the Stafford Hill Solar Farm — 11 acres of solar panels and battery banks spread over a landfill behind a town dump — and two wind farms. Those developments have come in for criticism from some residents and officials who object to living near noisy industrial machines and worry about marring the natural beauty that draws residents and visitors to the state. The critics include Gov. Phil Scott, a Republican who opposes putting wind turbines along mountain ridges.

But many customers say they are happy to be part of greening the area’s energy supply, whether for the financial savings, to reduce greenhouse gas emissions and slow global warming, or just to make sure the lights stay on in a power failure.

“It’s not really any different than being anywhere else,” said Alexis LaBerge, 27, who was one of the first to move into the low-income development in Waltham from an old house that guzzled fuel to keep the house and hot water heated.

Now, when the power from the grid goes out, as it did one night this spring, she does not have to worry about food spoiling in the refrigerator. “It’s definitely nice being brand-new and having the backup,” she said.