Coal-fired power plants are the biggest emitters of greenhouse gases in the United States, but new research finds that existing technology could cheaply slash the nation’s carbon spew nearly 80 percent by 2030.

How? By transporting renewable energy from where the sun is shining and the wind is blowing to where it is not, according to the study, which was published on Monday in the journal Nature Climate Change by scientists from the National Oceanic and Atmospheric Administration and the University of Colorado Boulder.

NOAA’s highly detailed weather data shows there’s nearly always someplace in the 48 contiguous states where electricity can be generated by solar power stations and wind farms, even if it happens to be hundreds or thousands of miles away from where it’s needed.

The quandary: How to move electricity generated by that sun or wind over long distances without losing too much of it in the process.

Utilities could add direct-current infrastructure to alternating-current transmission lines over the next 15 years as part of planned updates and upgrades without breaking the bank, said study coauthor Alexander MacDonald, who recently retired as director of NOAA’s Earth System Research Laboratory.

“Almost everybody believes that if we go to wind and solar energy it will be more expensive, or won’t be ready unless we have a big technological breakthrough” in battery storage technology, MacDonald said. “Our study says that with existing transmission technology and use of the whole 48 states with this ‘interstate for electrons,’ we’re ready right now to have a national system that has the same electric costs as today, with as much as 80 percent less carbon, and just as reliable.”

The greater reliance on wind and solar power would also cut water use for energy by 65 percent, the study found. That’s because fossil fuel plants, which generate 40 percent of the nation’s carbon emissions, need large volumes of water for cooling.

“Our study assumed that the existing U.S. power system, with all of its AC distribution and usage, stays the same,” said MacDonald. “Power can be taken off the HVDC network for use, and put on by generation. To a power provider, let’s say a utility, instead of building a coal plant, they build a connection to the HVDC network. Everything else stays the same.”

To test ideas about the most cost-effective means of generating power, MacDonald and his colleagues conducted a complex mathematical analysis that combined finely detailed data on continent-wide weather patterns from 2006 to 2008 with equally detailed data on power demand for the same period.

“NOAA folks have known for some time how big weather is,” said mathematician and physicist Christopher Clack of the Cooperative Institute for Research in Environmental Sciences, a collaboration between NOAA and the University of Colorado Boulder. “We built and ran a very sophisticated model that was able to take advantage of [NOAA’s] exceptionally good-quality weather data to look at the situation of the grid, and see if there’s any way of running the grid that would incorporate a really cheap system.”

The model was not designed to prioritize low carbon emissions, he said. “We tried to be completely agnostic on which technologies were picked. It turned out the most effective combination we saw was full U.S., 48-state transmission, backed up by gas when solar and wind wasn’t enough.”

Using the U.S. Energy Information Administration’s estimate of a 0.7 percent increase in power demand annually between 2015 and 2030, the researchers found that scenarios combining wind, solar, and natural gas power with a nationwide transmission grid cut greenhouse gas emissions from 33 to 78 percent below 1990 levels. 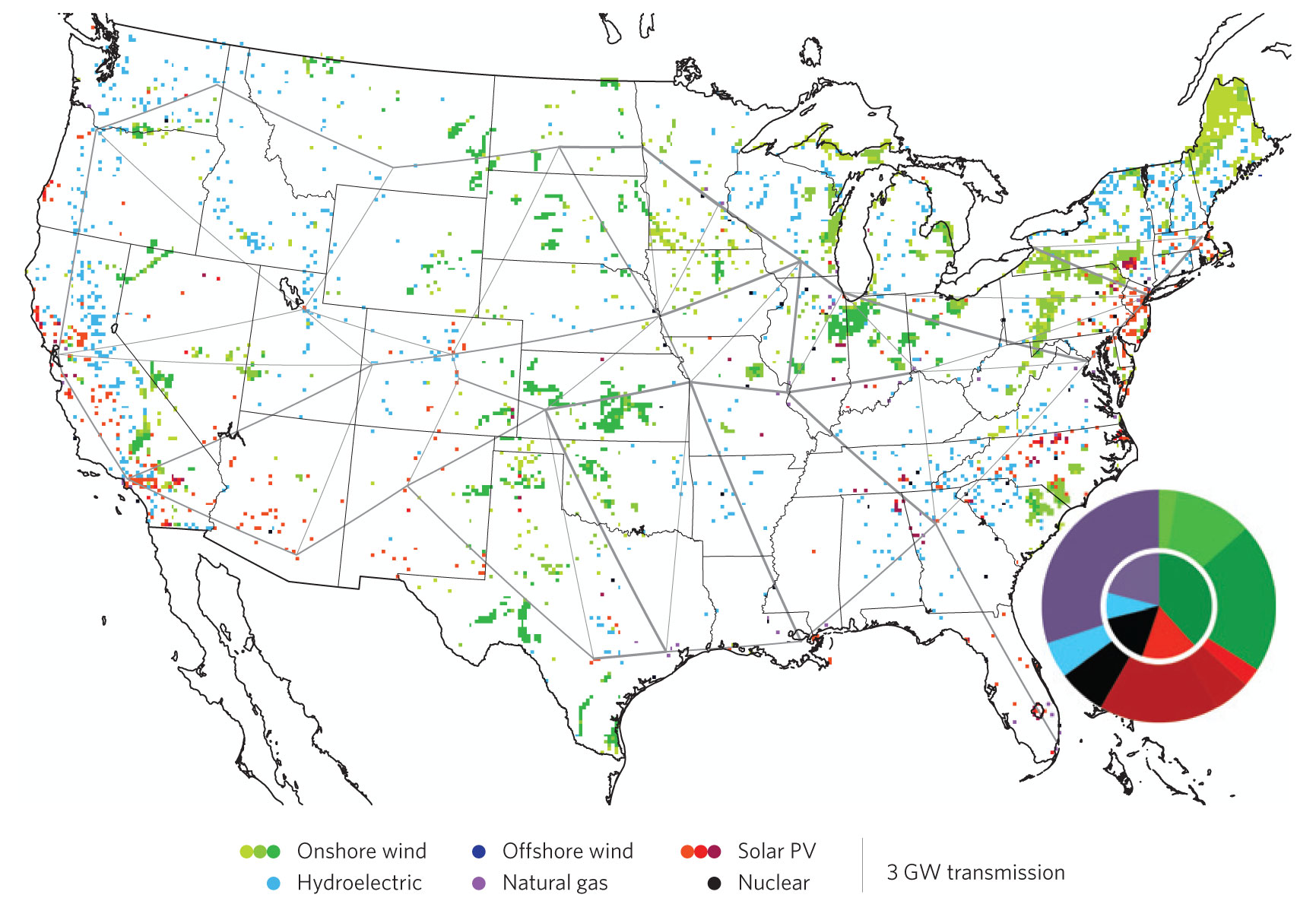 The HVDC transmission network assumes a cost of about $700 per megawatt-mile and another $182,000 for each substation. The authors note that economies of scale allow for that price for the HVDC line, which becomes substantially cheaper once the lines are longer than about 300 miles. Costs for renewables were fairly conservative, with medium cost-assumption estimates nearly in line with today’s costs for wind and solar.

If gas was cheaper than solar and wind, the emissions were higher; when renewables beat gas on price, emissions went down.

The cost to ratepayers was between $0.086 and $0.10 per kilowatt-hour—comparable to the actual average nationwide cost of $0.094 per kilowatt-hour in 2015 and potentially saving power customers $47.2 billion a year.

If coal-fired power was added to the mix, the cost of power dropped by just one one-thousandth of a cent, to $0.085 per kilowatt-hour. But greenhouse gas emissions went up, to 37 percent over 1990 levels.

Writing in the same issue of Nature Climate Change, Mark Jacobson, an environmental engineer at Stanford University, noted a few limitations to the study.

“Whereas the model optimizes resource location based on cost and considers several types of land use limitations, it also does not consider societal constraints on areas of beauty that might prevent development in some of the proposed locations,” he wrote. “Future work on this topic may also benefit from considering storage to eliminate the remainder of CO2 emissions.”

But Jacobson concluded that without a single new technology, “the study pushes the envelope to show that intermittent renewables plus transmission can eliminate most fossil fuel electricity while matching power demand at lower cost than a fossil-fuel-based grid.”

At the recent climate accord talks in Paris, the U.S. committed to lowering its greenhouse gas emissions 28 percent below 2005 levels by 2025.

According to NOAA, the new study’s findings show that the U.S. could cut its emissions 31 percent below 2005 levels within 15 years solely with changes in electricity generation.