Since winning the election earlier this year, Breed has already set her stall out with some ambitious proposals such as ways to curb the city’s homelessness problem, and has already been active as one of many city leaders determined to fight climate change. Late last month, Breed was part of a worldwide group of 23 cities and regions that signed a pledge to cut waste generated per capita by 15% by 2030, among other aims. 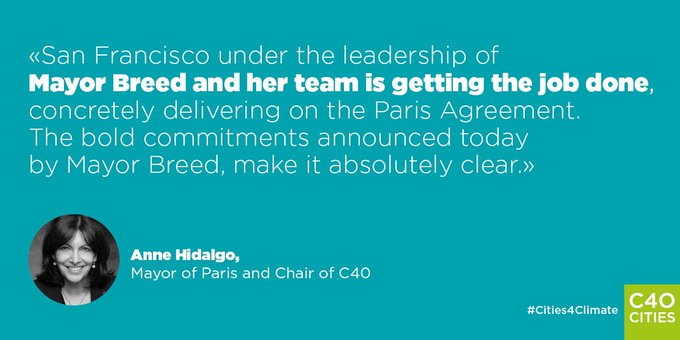 It comes with San Francisco having made great strides, including reducing its greenhouse gas emissions by 30% since 1990 while simultaneously growing its population by 20% since the same year. But Breed announced this new initiative with one eye on a desire to keep up the terms of the Paris climate accord, which President Trump withdrew the United States from last year.

Since that decision, cities have pledged to uphold the accord’s goals, while former New York City Mayor Michael Bloomberg contributed $4.5 million to cover a portion of its funding gap created by the U.S.’ withdrawal. And Bloomberg Philanthropies, his charitable arm, launched the $70 million American Cities Climate Challenge in June to select 20 mayors to participate in a two-year program designed to combat climate change.

Breed, just months after being sworn into office, is continuing to bolster her environmental bona fides, joining peer Seattle Mayor Jenny Durkan, who release a climate plan for the city earlier this year. In addition to the city’s announcement, the Sierra Club announced Breed has joined the 200-strong Mayors for 100% Clean Energy coalition as a new national co-chair. And in a statement, Sierra Club Executive Director Michael Brune said it is incumbent on cities to lead with the federal government being less active. “Cities don’t need to wait for Washington, D.C. to act in order to move forward with clean energy,” he said.