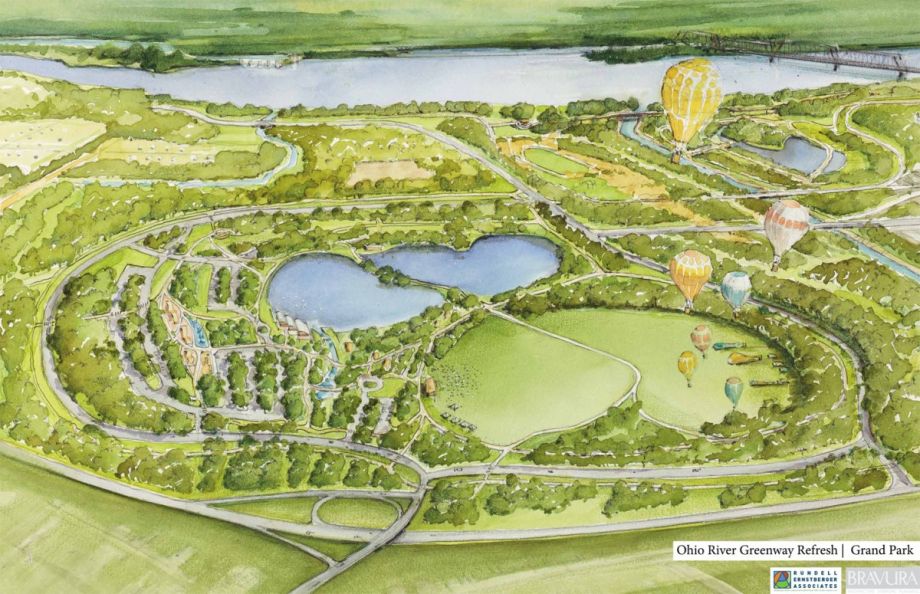 Right now, the Ohio River Greenway consists of a few disjointed sections of multi-use trail along the bank of the Ohio River in southern Indiana, across the water from Louisville, Kentucky. When it’s completed this summer, the 7-mile greenway will connect the small cities of New Albany, Clarksville and Jeffersonville. If River Heritage Conservancy director Scott Martin gets his way, however, a contiguous biking and walking path will only be the beginning for the Greenway.

Martin wants to create a 500-acre park at the center of the Greenway. His vision is for something no less than, “an Olmstedian park system” that will transform the area into a draw for residents and tourists and restore the damaged land into wildlife habitat.

The Olmsted comparison isn’t flippant. The famed Olmsted brothers designed a parks system in Louisville with 18 parks connected by greenway streets. In his previous job as parks director for the Parklands of Floyds Fork, Martin helped create a new interconnected parks system in the Olmsted vision. The Parklands of Floyds Fork is a series of five parks on the eastern side of Louisville connected by a parkway and multi-use paths.

“The Louisville metro area is out-punching its weight class right now in terms of its park systems,” says Martin. “With this new systemic plan, we’re trying to turn the Ohio River into the front yard for communities in Indiana.”

Doing so will be no easy task. The nonprofit River Heritage Conservancy is hoping to solicit private donations, philanthropic grants and public funding to buy the private land that makes up their preferred park site. The project has garnered some support already from businesses and the Paul Ogle Foundation. Wendy Dant Chesser, president of One Southern Indiana, the local chamber of commerce, told the Louisville Courier Journal that she thought the project could boost quality of life and fits with the chamber’s economic development strategy.

The Conservancy recently purchased its first 37 acres. Much of the land at the site was used for industry or as junkyards. The brownfields will require a lot of work to transform into natural habitat.

There are obvious comparisons to Louisville’s Waterfront Park, another relatively recent addition to the region. The city transformed the abandoned and underutilized industrial along the river into an 85-acre park in the late 1990s. It has green space and playgrounds and hosts concerts and events, all of which draw about 1.5 million visitors a year. Though Martin agrees there are parallels, he says the Ohio River Greenway park will likely be a more natural space with native species that help attract birds and wildlife.

“We have dynamic landscapes because of the flood regimen of the Ohio. We have enormous wetland potential with this park. We get excited because we don’t have a lot of wetlands left. Where we do have wetlands, the wildlife diversity is off the charts,” says Martin.

He continues, “And it’s right smack dab in a metro area with 1.2 million people. That’s a real rare opportunity to get that much green infrastructure in the center of that density of folks.”

The Louisville metro area happens to be in real need of more natural green space. It is tied for 13th most polluted metro area by year-round particle pollution on the American Lung Association’s annual ranking. After a few years of improvement, Louisville recently fell back on the Environmental Protection Agency’s list of cities that don’t meet smog standards.

Part of the problem is that prevailing weather conditions in the Ohio River valley tend to trap stagnant air. But another factor is that the metro region has a sparse density of trees. A 2013 study found that the region has about 30 percent tree cover and the city proper has just 10 percent. The same study found that the city of Atlanta has 45 percent, for comparison. A new 500-acre park with natural forest and wetlands isn’t a silver bullet, but it would certainly have a positive impact.

Exactly how they design the park to “get it right” will be determined after the nonprofit hires a landscape architecture firm this year to do the master plan. They will hold a design competition to select the firm later this year.

In addition to restoring the natural land, the hope is to create a park that draws locals and visitors alike. Martin wants to see people out paddling canoes and kayaks on the Ohio River—something he says does not currently happen much—and walking and biking on the trails.

River Heritage Conservancy is working on a long timeline for its park vision. It could take as much as two decades to have everything complete. But Martin is hoping they can get pieces of it done quickly to generate excitement and support as they think about their capital campaign next year.

“It’s a community that realizes its river is special,” he says. “Our biggest opportunity is that the park will be right on the Ohio River. Any time you add water to a park, magic happens.”