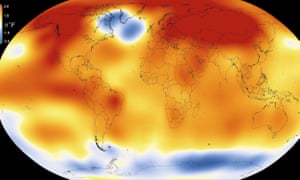 Media Matters for America has published a report detailing US broadcast news coverage of climate change in 2015, and their findings are stunning.

2015 was a banner year for climate news. February, June, October, November, and December were each their respective hottest months on record, and 2015 shattered the record for hottest year. The pope delivered a climate encyclical.Investigative journalists at Inside Climate News discovered that Exxon knew about the dangers of human-caused global warming while it funded a climate misinformation campaign, and the New York attorney general launched an investigation into the company’s behavior. President Obama’s Clean Power Plan went into effect, and he rejected the Keystone XL pipeline. And most importantly, 195 countries agreed to cut carbon pollution as much as possible to stem global warming.

Despite all these critically important stories, as in the presidential debates, climate change was largely absent from US broadcast news. Climate coverage fell in 2015.

Most of the decline was due to ABC, which only spent 13 minutes in 2015 covering climate change – three times less than even Fox. While Fox’s coverage increased, most of the network’s climate segments featured interviews with guests who criticized efforts to address global warming.

In particular, the award-winning Inside Climate News Exxon investigation and the launch of the Clean Power Plan were largely overlooked by the news networks.

When it came to interviewing or quoting scientists and doing segments about climate science research, PBS NewsHour again rose above its peers, while ABC’sWorld News Tonight flunked science class.

Climate scientists were entirely absent from the Sunday news shows, with one exception. On CBS’ Face the Nation in December, anchor John Dickerson interviewed Dr. Marshall Shepherd, meteorologist and director of University of Georgia’s Atmospheric Sciences Program, to discuss the importance of the UN summit’s goal of limiting global warming to two degrees Celsius. This was a sharp decline from 2014, in which climate scientists were interviewed or quoted on seven Sunday news shows.

Failure to report on the most important issue of our day

Climate change affects some of the most critical components of our society: food security, national defense, extreme weather, the economy, public health, the environment, and so on. The broadcast networks touched on some of these, like extreme weather, but largely missed others.

As the co-founder of the House Sustainable Energy and Environment Coalition, I read Media Matters’ new study and it’s a wake up call to the news networks. The most important long term global and national issue shouldn’t be getting short-thrift. People need more information, not less.

These findings may help explain why Americans aren’t concerned about climate change. We rely on the media to inform the public, and on the most important issue of our time, the US broadcast news media are failing to adequately inform Americans. As Rep. Israel notes, they’re moving in the wrong direction and need to do much better.