The SolarCity and NRDC study looks at a full suite of costs and benefits previously identified by Nevada regulators.

In Nevada, where regulatory changes recently brought the rooftop solar market to a standstill, a new analysis by SolarCity and the Natural Resources Defense Council finds that the state’s 23,000 existing rooftop solar customers provide net benefits to all Nevadans ranging from $7 million to $14 million per year.

The study, which aims to provide a more complete accounting of the costs and benefits of rooftop solar and other distributed energy resources, produced drastically different results from research conducted last year by the Public Utilities Commission of Nevada (PUCN). A draft order released in December stated that rooftop solar customers in the Silver State are subsidized to the tune of $16 million per year.

The decision came as Nevada was experiencing a rooftop solar boom, with the market growing from roughly 10,500 interconnected net-metering customers (12,800 in the pipeline) in July 2015, to nearly 18,000 interconnected net-metering customers (14,500 in the pipeline) at the end of last year. The new tariff effectively brought the Nevada rooftop solar market to a halt, with new project applications dropping by more than 90 percent after the changes were implemented on January 1, 2016.

SolarCity and Natural Resources Defense Council (NRDC) contend that the Nevada commission’s assessment used to justify the recent solar policy change is incomplete. In 2015, a PUCN order identified 11 categories of benefits and costs that should be evaluated to “determine the possible value/detriment of NEM” (p. 151). However, in making its net-metering ruling, regulators only accounted for two benefits — avoided energy and energy losses — citing “insufficient time or data in this proceeding to assign a value to the other nine variables.”

The 2015 order stated that “other information can be vetted in future general rate cases.” In April 2016, the commission laid out additional cost/benefit categories to be considered in Sierra Pacific Power’s upcoming Integrated Resource Plan.

The SolarCity/NRDC report seeks to address all of these factors in a more comprehensive analysis that builds on existing industry methodologies, including the Nevada Net Energy Metering Public Tool — a model used to quantify the costs and benefits of distributed generation that Energy+Environmental Economics (E3) developed for the PUCN in July 2014 — and the PUCN’s own cost/benefit analysis.

The report concluded that rooftop solar provides a net benefit to all Nevadans in the range of 1.6 cents to 3.4 cents per kilowatt-hour of solar production. The lower value accounts only for values that can be directly captured by the utility, while the higher value accounts for environmental externalities that benefit all Nevadans at large, such as the societal cost of carbon. Depending on which framework is adopted, the net value for the roughly 23,000 existing rooftop solar projects currently deployed in Nevada translates to $7 million to $14 million per year.

“We’re trying to be as conservative as possible to show that even with a reduced subset of categories, the benefits of rooftop solar are still very positive,” said Jon Wellinghoff, former chairman of the Federal Energy Regulatory Commission, who recently took the role of chief policy officer for SolarCity.

Wellinghoff presented the study’s findings at a meeting of Western utility commissioners on Monday in Lake Tahoe and again on Tuesday at Greenspun College in Las Vegas. SolarCity is sharing its analysis with the hope that it will inform policy and regulatory discussions on the value of net-metered solar and distributed energy resources going forward. 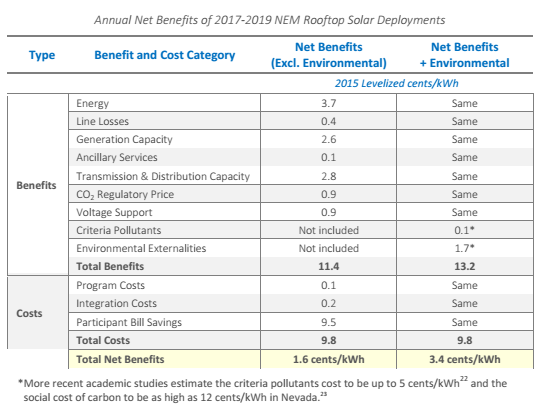 The SolarCity/NRDC study is the latest in a growing list of studies to find that rooftop solar provides an overall benefit to a state’s electricity grid. The E3 model developed for the Nevada commission in 2014 also found that there is no cost shift between solar and non-solar customers. E3 estimated that net-metered solar systems installed in the period 2004-2016 have a total net present value to all Nevada utility customers of $36 million during the systems’ lifetimes. However, the PUCN threw out the E3 report in making its determination last year.

In local TV interview, Anne-Marie Cuneo, director of regulatory operations at the PUCN, explained that the E3 study inaccurately represented the costs for large-scale solar projects, which skewed the relative value for rooftop solar. As a result, the staff rejected it entirely.

“There was nothing wrong with them rejecting the [E3] report, because it had old numbers for the cost of solar and a lot of things that weren’t current. And unfortunately, no one put in a fully updated study,” said Wellinghoff.

The SolarCity/NRDC study addresses the information gap by considering a fuller scope of benefits and costs, and by updating all underlying assumptions with the latest available data, including the price of utility-scale solar power, he said.

The next step is to put these findings into action.

In addition, the report has been submitted to the New Energy Industry Task Force, which is preparing recommendations for Nevada Governor Brian Sandoval to include in proposed legislation for 2017. A technical advisory committee informing the task force has already proposed introducing grandfathering for existing solar customers. The PUCN’s decision not to keep existing customers on the old rate plan has been a major point of contention.

Wellinghoff said the SolarCity/NRDC study could be taken up in another legislative proceeding next year or put directly to the voters in a petition. SolarCity is already spearheading a ballot measure with the Bring Back Solar Alliance that would restore net metering credits to the retail rate. Separately, The Alliance for Solar Choice hassued the PUCN, and thousands of Nevada solar customers have filed a class-action lawsuit.

Wellinghoff said the solar industry will use hardline tactics if forced, but that most players favor a more collaborative approach. Or at least that’s what Wellinghoff appears to be aiming for.

“I think [collaboration] is the wave of the future. I hope it’s a way to have all of us move forward in a way that’s less expensive, less contentious and more beneficial to consumers, because at the end of the day, it’s all about giving consumers choice,” he said.

He acknowledged that net metering is an imperfect proxy for the full benefits of solar, and that New York state’s multi-year effort to evaluate the full suite of costs and benefits for distributed energy resources through the Reforming the Energy Vision initiative could set new standards for the entire electricity industry. Last month, SolarCity signed on to a landmark joint proposal with several utilities on the future of net metering in the state.

“We would like to replicate that collaborative process in as many states as possible,” Wellinghoff said.

Arizona, home to some of the fiercest solar policy battles to date, could be next. SolarCity and the state’s largest utility, Arizona Public Service, are set to beginsettlement talks on alternatives to traditional net metering and rates for distributed energy resources next week.

Wellinghoff couldn’t offer any insight on how the closed-door meetings are expected to unfold. “But I hope at the end of it to come out and have some good news to tell you,” he said.