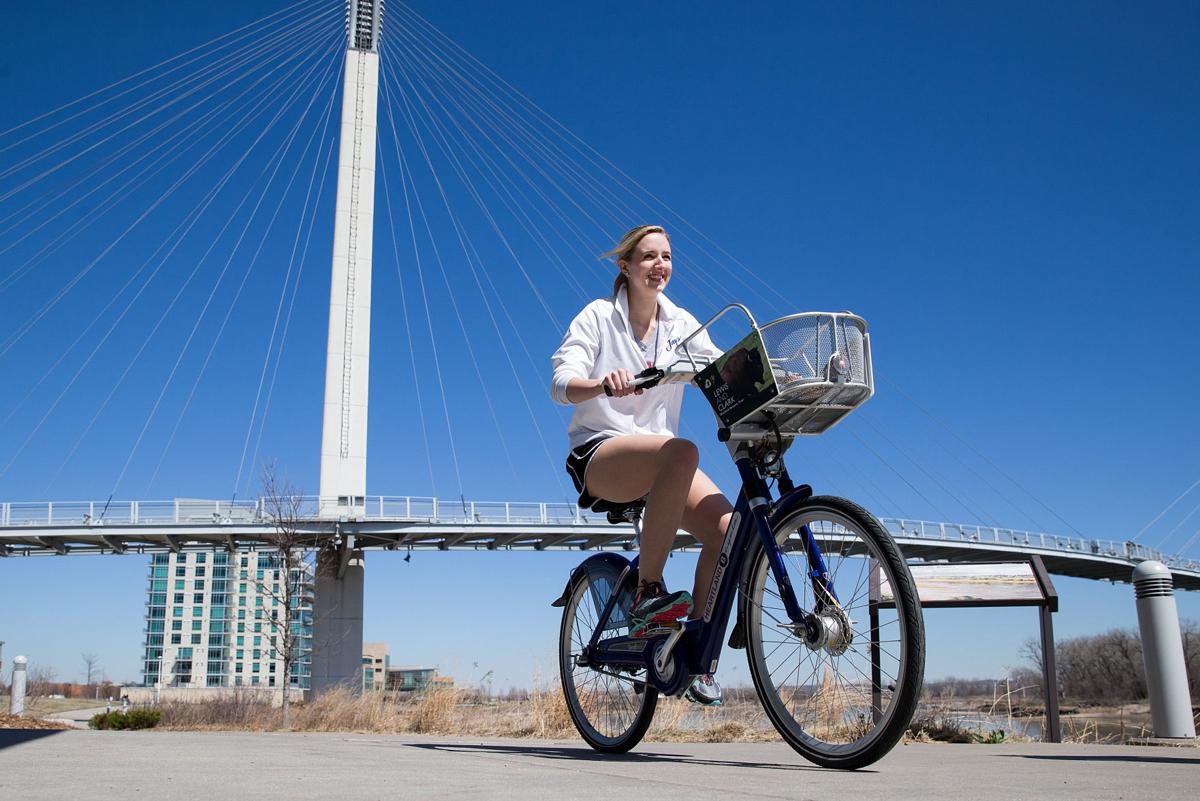 Creighton University students Taylor Pick, left, and Katie Gizzie, both of Omaha, use the bicycles they rented through the Heartland B-cycle service to cross the Missouri River on the Bob Kerrey Pedestrian Bridge in 2015. The public bike-sharing system is expected to nearly double in size with the help of federal and state grants.

Heartland B-cycle has partnered with the City of Omaha to nearly double the size of the public bike-sharing system by 2019.

B-cycle will add 36 stations and 150 bikes. Organizers hope to have the first round of new equipment, which includes 20 bikes, installed in Omaha next year, said Ben Turner, executive director of Heartland B-cycle.

The city signed onto the project last month.

New stations will be placed near existing bus stops and the planned Bus Rapid Transit route east of 72nd Street. Officials are looking at areas along Farnam Street and western parts of downtown, as well as stops in north and South Omaha. They focus on placing stations in well-populated areas.

“Ideally they’ll be spread across the entire community,” Miller said. “We have to take it incrementally.”

This project will target existing public transit users, but officials also hope to draw new users, including those who can’t afford cars.

“There are a great number of Omahans who can’t drive or don’t have financial means to drive a car,” Miller said. “Another important part of all this is to provide more mobility for our citizens.”

Federal and state grants provided $1.2 million for the project.

The state grant, from the Nebraska Environmental Trust, contributed $292,000 to the project. It also will provide some additional support for operating costs, Turner said.

The federal grant, which was worth $930,000, required a city partner. That means the city will take ownership of all new equipment purchased with the grant money.

For a fee, people can rent a bike from a B-cycle station, ride it and return it to any station.

B-cycle added new bikes to stations in downtown Omaha this summer, in part to accommodate College World Series crowds. Another station was temporarily relocated earlier this month to the trailhead of the Wabash Trace Nature Trail in Council Bluffs.

“There’s a powerful opportunity for bike sharing to be a transit extender,” Turner said. “We think it has the ability to shorten people’s commutes.”