Noam Chomsky: a brief summary I think is if you take a look at recent history since the Second World War, something really remarkable has happened. First, human intelligence created two huge sledgehammers capable of terminating our existence—or at least organized existence—both from the Second World War. One of them is familiar. In fact, both are by now familiar. The Second World War ended with the use of nuclear weapons. It was immediately obvious on August 6, 1945, a day that I remember very well. It was obvious that soon technology would develop to the point where it would lead to terminal disaster. Scientists certainly understood this.

In 1947 the Bulletin of Atomic Scientists inaugurated its famous Doomsday Clock. You know, how close the minute hand was to midnight? And it started seven minutes to midnight. By 1953 it had moved to two minutes to midnight. That was the year when the United States and Soviet Union exploded hydrogen bombs. But it turns out we now understand that at the end of the Second World War the world also entered into a new geological epoch. It’s called the Anthropocene, the epoch in which humans have a severe, in fact maybe disastrous impact on the environment. It moved again in 2015, again in 2016. Immediately after the Trump election late January this year, the clock was moved again to two and a half minutes to midnight, the closest it’s been since ’53.

So there’s the two existential threats that we’ve created—which might in the case of nuclear war maybe wipe us out; in the case of environmental catastrophe, create a severe impact—and then some.

A third thing happened. Beginning around the ’70s, human intelligence dedicated itself to eliminating, or at least weakening, the main barrier against these threats. It’s called neoliberalism. There was a transition at that time from the period of what some people call “regimented capitalism,” the ’50s and ’60s, the great growth period, egalitarian growth, a lot of advances in social justice and so on—

NC: Social democracy, yeah. That’s sometimes called “the golden age of modern capitalism.” That changed in the ’70s with the onset of the neoliberal era that we’ve been living in since. And if you ask yourself what this era is, its crucial principle is undermining mechanisms of social solidarity and mutual support and popular engagement in determining policy.

It’s not called that. What it’s called is “freedom,” but “freedom” means a subordination to the decisions of concentrated, unaccountable, private power. That’s what it means. The institutions of governance—or other kinds of association that could allow people to participate in decision making—those are systematically weakened. Margaret Thatcher said it rather nicely in her aphorism about “there is no society, only individuals.”

Since the Second World War, we have created two means of destruction. Since the neoliberal era, we have dismantled the way of handling them.

She was actually, unconsciously no doubt, paraphrasing Marx, who in his condemnation of the repression in France said, “The repression is turning society into a sack of potatoes, just individuals, an amorphous mass can’t act together.” That was a condemnation. For Thatcher, it’s an ideal—and that’s neoliberalism. We destroy or at least undermine the governing mechanisms by which people at least in principle can participate to the extent that society’s democratic. So weaken them, undermine unions, other forms of association, leave a sack of potatoes and meanwhile transfer decisions to unaccountable private power all in the rhetoric of freedom.

Well, what does that do? The one barrier to the threat of destruction is an engaged public, an informed, engaged public acting together to develop means to confront the threat and respond to it. That’s been systematically weakened, consciously. I mean, back to the 1970s we’ve probably talked about this. There was a lot of elite discussion across the spectrum about the danger of too much democracy and the need to have what was called more “moderation” in democracy, for people to become more passive and apathetic and not to disturb things too much, and that’s what the neoliberal programs do. So put it all together and what do you have? A perfect storm.

CL: What everybody notices is all the headline things, including Brexit and Donald Trump and Hindu nationalism and nationalism everywhere and Le Pen all kicking in more or less together and suggesting some real world phenomenon.

NC: it’s very clear, and it was predictable. You didn’t know exactly when, but when you impose socioeconomic policies that lead to stagnation or decline for the majority of the population, undermine democracy, remove decision-making out of popular hands, you’re going to get anger, discontent, fear take all kinds of forms. And that’s the phenomenon that’s misleadingly called “populism.”

CL: I don’t know what you think of Pankaj Mishra, but I enjoy his book Age of Anger, and he begins with an anonymous letter to a newspaper from somebody who says, “We should admit that we are not only horrified but baffled. Nothing since the triumph of Vandals in Rome and North Africa has seemed so suddenly incomprehensible and difficult to reverse.”

NC: Well, that’s the fault of the information system, because it’s very comprehensible and very obvious and very simple. Take, say the United States, which actually suffered less from these policies than many other countries. Take the year 2007, a crucial year right before the crash. 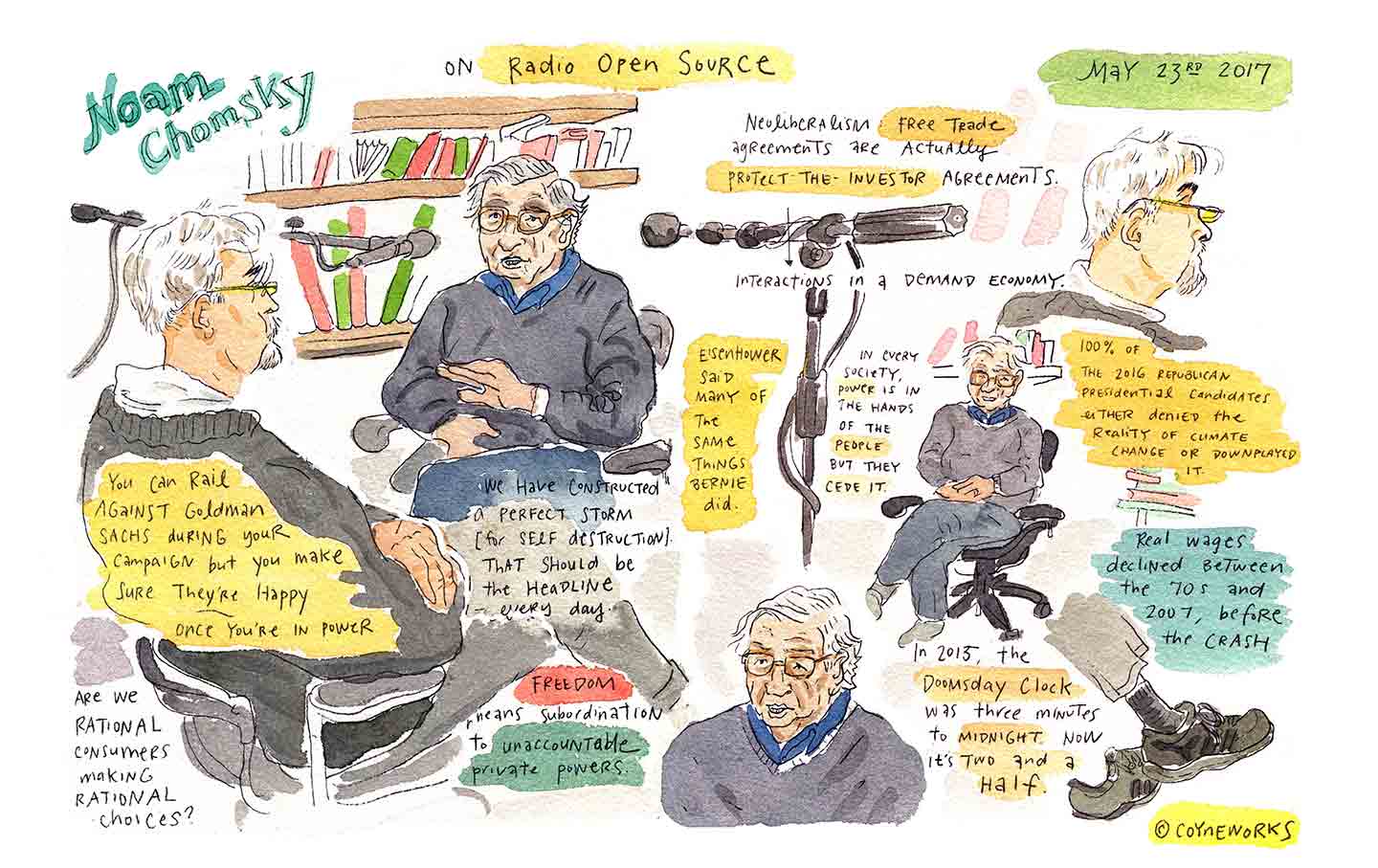 What was the wondrous economy that was then being praised? It was one in which the wages, the real wages of American workers, were actually lower than they were in 1979 when the neoliberal period began. That’s historically unprecedented except for trauma or war or something like that. Here is a long period in which real wages had literally declined, while there was some wealth created but in very few pockets. It was also a period in which new institutions developed, financial institutions. You go back to the ’50s and ’60s, a so-called Golden Age, banks were connected to the real economy. That was their function. There were also no crashes because there were New Deal regulations.

Starting in the early ’70s there was a sharp change. First of all, financial institutions exploded in scale. By 2007 they actually had 40 percent of corporate profits. Furthermore, they weren’t connected to the real economy anymore.

In Europe the way democracy is undermined is very direct. Decisions are placed in the hands of an unelected troika: the European Commission, which is unelected; the IMF, of course unelected; and the European Central Bank. They make the decisions. So people are very angry, they’re losing control of their lives. The economic policies are mostly harming them, and the result is anger, disillusion, and so on.

Noam Chomsky: What Did Adam Smith Really Mean by “The Invisible Hand”?

We just saw it two weeks ago in the last French election. The two candidates were both outside the establishment. Centrist political parties have collapsed. We saw it in the American election last November. There were two candidates who mobilized the base: one of them a billionaire hated by the establishment, the Republican candidate who won the nomination—but notice that once he’s in power it’s the old establishment that’s running things. You can rail against Goldman Sachs on the campaign trail, but you make sure that they run the economy once you’re in.

CL: So, the question is, at a moment when people are almost ready… when they’re ready to act and almost ready to recognize that this game is not working, this social system, do we have the endowment as a species to act on it, to move into that zone of puzzlement and then action?

NC: I think the fate of the species depends on it because, remember, it’s not just inequality, stagnation. It’s terminal disaster. We have constructed a perfect storm. That should be the screaming headlines every day. Since the Second World War, we have created two means of destruction. Since the neoliberal era, we have dismantled the way of handling them. That’s our pincers. That’s what we face, and if that problem isn’t solved, we’re done with.

CL: I want to go back Pankaj Mishra and the Age of Anger for a moment—

NC: It’s not the Age of Anger. It’s the Age of Resentment against socioeconomic policies which have harmed the majority of the population for a generation and have consciously and in principle undermined democratic participation. Why shouldn’t there be anger?

CL: Pankaj Mishra calls it—it’s a Nietzschean word—“ressentiment,” meaning this kind of explosive rage. But he says, “It’s the defining feature of a world where the modern promise of equality collides with massive disparities of power, education, status and—

NC: Which was designed that way, which was designed that way. Go back to the 1970s. Across the spectrum, elite spectrum, there was deep concern about the activism of the ’60s. It’s called the “time of troubles.” It civilized the country, which is dangerous. What happened is that large parts of the population—which had been passive, apathetic, obedient—tried to enter the political arena in one or another way to press their interests and concerns. They’re called “special interests.” That means minorities, young people, old people, farmers, workers, women. In other words, the population. The population are special interests, and their task is to just watch quietly. And that was explicit.

Two documents came out right in the mid-’70s, which are quite important. They came from opposite ends of the political spectrum, both influential, and both reached the same conclusions. One of them, at the left end, was by the Trilateral Commission—liberal internationalists, three major industrial countries, basically the Carter administration, that’s where they come from. That is the more interesting one [The Crisis of Democracy, a Trilateral Commission report]. The American rapporteur Samuel Huntington of Harvard, he looked back with nostalgia to the days when, as he put it, Truman was able to run the country with the cooperation of a few Wall Street lawyers and executives. Then everything was fine. Democracy was perfect.

But in the ’60s they all agreed it became problematic because the special interests started trying to get into the act, and that causes too much pressure and the state can’t handle that.

CL: I remember that book well.

NC: We have to have more moderation in democracy.

NC: It wasn’t him. It was the liberal establishment. He was speaking for them. This is a consensus view of the liberal internationalists and the three industrial democracies. They—in their consensus—they concluded that a major problem is what they called, their words, “the institutions responsible for the indoctrination of the young.” The schools, the universities, churches, they’re not doing their job. They’re not indoctrinating the young properly. The young have to be returned to passivity and obedience, and then democracy will be fine. That’s the left end.

Now what do you have at the right end? A very influential document, the Powell Memorandum, came out at the same time. Lewis Powell, a corporate lawyer, later Supreme Court justice, he produced a confidential memorandum for the US Chamber of Commerce, which has been extremely influential. It more or less set off the modern so-called “conservative movement.” The rhetoric is kind of crazy. We don’t go through it, but the basic picture is that this rampaging left has taken over everything. We have to use the resources that we have to beat back this rampaging New Left which is undermining freedom and democracy.

Listen to the full conversation with Noam Chomsky on Radio Open Source.