The researchers warn roadless areas are disappearing and that urgent action is needed to protect these last wildernesses, which help provide vital natural services to humanity such as clean water and air.

The impact of roads extends far beyond the roads themselves, the scientists said, by enabling forest destruction, pollution, the splintering of animal populations and the introduction of deadly pests. New roads also pave the way to further exploitation by humans, such as poaching or mining, and new infrastructure. 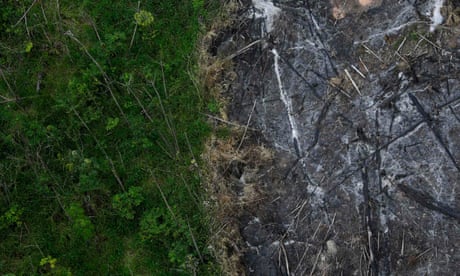 An international team of researchers analysed open-access maps of 36m km of road and found that over half of the 600,000 fragments of land in between roads are very small – less than 1km2.  A mere 7% are bigger than 100km2, equivalent to a square area just 10km by 10km. Furthermore, only a third of the roadless areas were truly wild, with the rest affected by farming or people.

The last remaining large roadless areas are rainforests in the Amazon and Indonesia and the tundra and forests in the north of Russia and Canada. Virtually all of western Europe, the eastern US and Japan have no areas at all that are unaffected by roads. The scientists considered that land up to a kilometre on each side of a road was affected, which they believe is a conservative estimate.

The length of the world’s roads is projected to increase by more than 60% by 2050, say the researchers, but only about 5% of the roadless areas currently have any legal protection, according to the new work published in the journal Science.

“As roads continue to expand, there is an urgent need for a global strategy for the effective conservation, restoration and monitoring of roadless areas and their ecosystems,” said Prof Pierre Ibisch, who led the study and is at the Eberswalde University for Sustainable Development in Germany. “We urge governments to avoid the costly building of roads in remote areas, which would be ecologically disastrous.”

The natural world is in the midst of a mass extinction as wild places are destroyed by conversion to farmland, mining and pollution, and animals are hunted in huge numbers. In October, a major analysis found the number of wild creatures was on track to fall by two-thirds by 2020, compared to 1970.

Roads are the catalyst for much of the destruction by, for example, giving illegal loggers access into the Amazon or poachers access to wild animals. But Ibisch said the road maps the team used, though the best available, were certain to be incomplete and that the true situation was even worse, for example in Borneo where many oil palm plantation roads have yet to be mapped.

Ibisch also said international attempts to protect the environment often ignored the importance of the last remaining roadless areas. “It is astonishing to see they have not taken into account roadless areas,” he said.