Excerpt from David Roberts on Vox.com Jan 2018:  “It seems like the smart thing would be to get on with it.”

While there’s been a great deal of work done on the difference between, say, 2 and 4 degrees warming (which would be catastrophic), there’s been less modeling around 1.5 and no comprehensive comparison of 1.5 and 2.

Happily, a new study in the journal Earth System Dynamics tackles this directly. Over at CarbonBrief, Roz Pidcock has a great rundown on the study that gets into the background and some of the implications.

Best of all, the team at CarbonBrief (which you should really bookmark) has compiled the relevant comparisons in the study into a single clear, aesthetically pleasing graphic:

2 degrees will be much worse than 1.5 in some places

In terms of heat extremes, the authors write, “the additional 0.5°C increase in global-mean temperature marks the difference between events at the upper limit of present-day natural variability and a new climate regime, particularly in tropical regions.”

Around the Mediterranean, freshwater availability will drop by almost twice as much at 2 degrees as at 1.5 — 17 percent versus 9 percent.

Some high-latitude regions may benefit from the difference between 1.5 and 2 degrees (though such benefits will be wiped out if temperature subsequently continues rising). But even getting up to 2 degrees, “tropical regions like West Africa, South-East Asia, as well as Central and northern South America are projected to face substantial local yield reductions, particularly for wheat and maize.”

As for sea level rise, relative to 1.5 degrees, 2 degrees would mean 10 centimeter higher levels and a 30 percent higher rate of increase by 2100.

We will have more information on this comparison when the IPCC completes its special report on the impacts of 1.5 degrees later this year. But the new Earth System Dynamics study already confirms what many scientists have been warning for years: 2 degrees is not a “safe” threshold. Negative impacts are already underway and will only get worse.

We don’t have very long to make up our minds. The window for hitting 1.5 degrees is rapidly closing. Here’s another terrifying graphic from CarbonBrief, showing how many years remain before the “carbon budget” for various temperatures is used up:

At our present rate of emissions, our carbon budget for a good (66 percent) chance of limiting warming to 1.5 degrees will be used up in six years. Except, oops, that graphic is two years old, so now it’s down to four years.

To hit the brakes at 1.5 degrees, global carbon emissions would need to immediately begin plunging, faster than they ever have, and hit zero by 2050 (and then go negative):

That would require the equivalent of the US mobilization for World War II, only global, and sustained for the rest of the century. The chances of that happening seem … remote. For all we know, Trump will still be in office when the 1.5 degree budget is used up.

But we should be clear about the decision we are making, even if we’re only making it by not making a decision.

By delaying the necessary work of decarbonization, we are consigning millions of people in tropical regions to less food and in the Mediterranean to less water — with all the attendant health problems and conflict. We’re allowing more heat waves and higher seas. We’re giving up on the world’s coral reefs, and with them the hundreds of species that rely on them.

And even then, the decision: 3 degrees or 4?

The longer we wait, the more human suffering and irreversible damage to ecosystems we inscribe into our collective future. But there’s no hiding, no escaping the imperative to decarbonize. It must be done if our species is to have a long-term home on Earth.

Seems like the smart thing would be to get on with it.

Half a degree makes a very big difference when judging how different parts of the world will feel the effects of climate change.

This is the conclusion from the first study to compare and contrast the consequences of 1.5C world compared to a 2C world, published today in Earth System Dynamics.

Both 2C and 1.5C are explicitly mentioned in the Paris agreement as potential upper limits for global warming since the preindustrial era, but details from scientists on how the temperature thresholds compare have been sparse.

For example, an extra 0.5C could see global sea levels rise 10cm more by 2100, water shortages in the Mediterranean double and tropical heatwaves last up to a month longer. The difference between 2C and 1.5C is also “likely to be decisive for the future of coral reefs”, with virtually all coral reefs at high risk of bleaching with 2C warming.

The authors presented their research today at the European Geosciences Union, an annual major gathering of geoscientists taking place this week in Vienna.

The Paris agreement – adopted in December 2015 and due to be officially signed by more than 150 countries on Friday – codified what the authors of today’s study call a “two-headed” temperature goal.

It pledged to keep the average global surface temperature “well below 2C” and “pursue efforts” to limit the increase since preindustrial times to 1.5C.

The nod to 1.5C recognised that many low lying island nations are already feeling the impacts of climate change and that coral reef and Arctic ecosystems face high risks well below 2C.

But the specific reference to 1.5C as well as 2C caught the scientific community somewhat off-guard. Today’s paper says:

“Despite the prominence of these two temperature limits, a comprehensive overview of the differences in climate impacts at these levels is still missing.”

A recent commentary in Nature by Prof Simon Lewis, professor of global change at University College London, is a little stronger on this point. As he puts it:

“The emergence of 1.5 C as a serious policy position comes with important lessons for scientists. The global research community has shockingly little to say on the probable impacts of a 1.5 C rise.”

The scientific community now, at least, seems to be rising to the challenge. Last week, the IPCC confirmed it will dedicate one of its special reports to the 1.5C goal. This is due to be published in 2018.

Work on today’s paper began in 2014, long before the Paris conference. The United Nations Framework Convention on Climate Change called on scientists to explore the difference between a 1.5C and 2C long term goal, as part of its 2013-2015 review.

“[The review] concluded last year that, while 2C cannot be considered safe and 1.5C would clearly be a safer limit, the science on 1.5C is less robust than on 2C. So clearly, there’s a research gap here.”

The study compared how extreme weather, water availability, crop yields, sea level rise and risks to coral reefs differ in a world where global temperature rises 1.5C, compared to if it rises 2C.

Using 11 climate models, the authors looked at how each of the impacts plays out globally, as well as in 26 different regions. This is important since the world won’t warm at the same pace everywhere, the paper notes.

By Rosamund Pearce for Carbon Brief.

Some of the most dramatic differences occur with heat extremes, with heatwaves in the tropics lasting up to three months with 2C warming, compared to two months with 1.5C. The paper says:

“[T]he additional 0.5C increase in global-mean temperature marks the difference between events at the upper limit of present-day natural variability and a new climate regime, particularly in tropical regions.”

High northern latitudes are expected to see some of the biggest increases in heavy rainfall, with the maximum over a five-day period rising by 7% for 2C warming, compared to 5% for 1.5C.

At the same time, water scarcity in the Mediterranean is likely to be twice as severe at 2C than at 1.5C, with climate-induced shortfalls of 17% compared to 9% (relative to 1986-2005 levels). 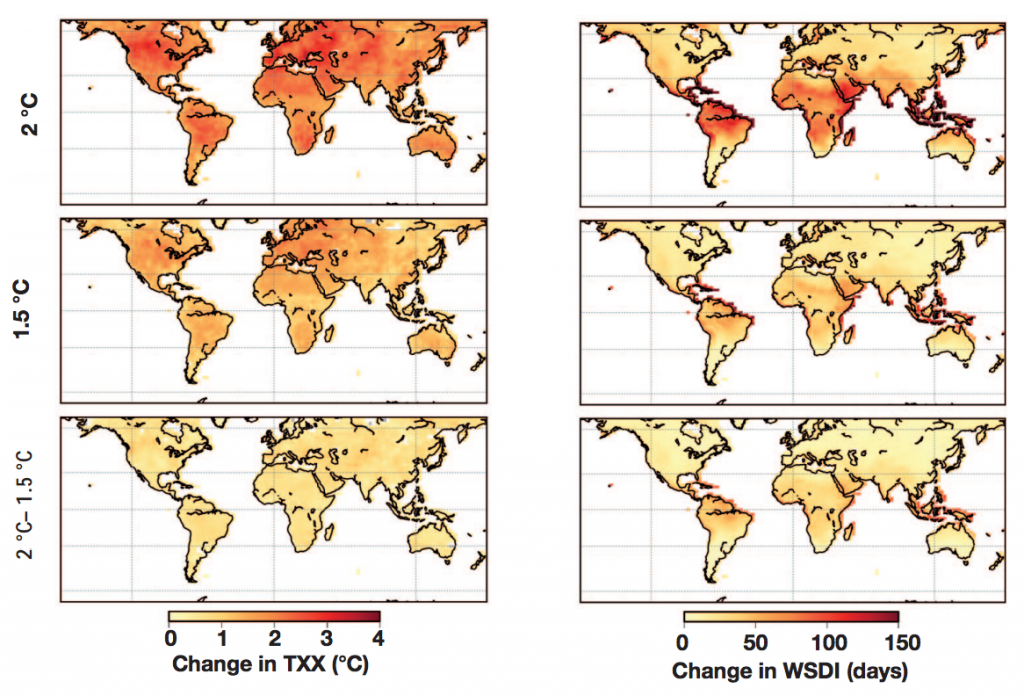 Global changes in the intensity of hot extremes (left) and the duration of warm spells (right) with 2C warming (top), 1.5C (middle) and the difference between the two (bottom) Source: Schleussner, C-F, et al., (2016)

Climate change impacts on crops are complicated, depending a lot on the crop in question and where in the world you’re looking. Schleussner tells Carbon Brief:

“However, observational evidence is pointing towards the fact that climate change is already negatively impacting agricultural yields.”

The new study’s results are in line with previous research suggesting an average reduction of about 6% in global wheat yields per degree of warming, Schleussner tells Carbon Brief.

Tropical regions, such as West Africa, Southeast Asia, Central America and northern South America, are likely to be worst affected, the study notes, with yields of wheat and maize set to decline.

The study accounts for the potential of higher CO2 to have a positive effect on crop yields, particularly in high-latitude regions, but notes this is still not well understood.

The sheer scale of the contrast between climate impacts 1.5C and 2C came as “quite a surprise” to the authors, Schleussner tells Carbon Brief:

“Our results clearly show that the difference between 1.5C and 2C is not only a matter of gradual change.”

So, should 2C remain the reference point for “dangerous anthropogenic interference in the climate system” or are impacts at 1.5C severe enough to warrant a rethink?

While science can make sure there’s as much evidence as possible, that’s a conversation that extends further than the scientific community, say the authors in the paper:

“Although the assessment of levels of dangerous interference is primarily a political process that requires value judgements and depends on different world views, it needs to be informed by the best available science outlining the impacts of climate change and mitigation efforts.” 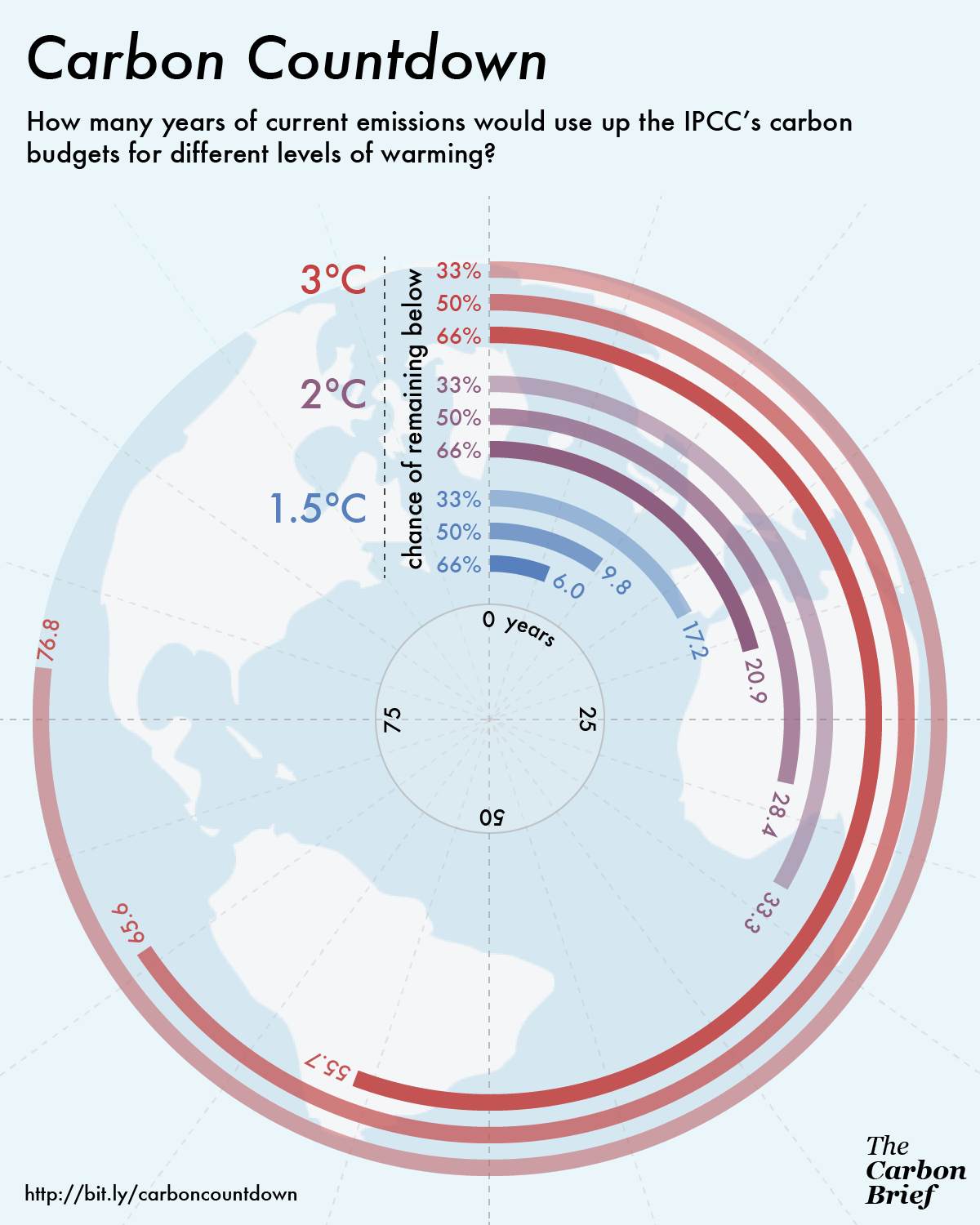 How many years of current emissions would use up the IPCC’s carbon budgets for different levels of warming?

Acknowledging that capping warming at 1.5C is preferable to 2C is one thing, but it’s important to talk about the realities of getting there. And the scale of the challenge is immense.

On current emissions, the carbon budget for 1.5C will effectively be blown in about four and a half years, as our graphic above shows (Note: figures are based on 2014 emissions).

The consequence of this is that any realistic possibility of limiting warming to 1.5C in the long term means overshooting the target and somehow coming back down. Schleussner tells Carbon Brief:

“Scientific findings…show that it is both physically and economically feasible to limit warming to below 1.5°C by 2100, after temporarily exceeding 1.5°C in the 2050s (but still staying well below 2°C).

But doing so involves relying on being able to “suck” carbon dioxide out of the air, using so-called negative emissions technologies (NETs). Carbon Brief ran a special series of article last week looking in-depth at possible approaches and how feasible experts think they are.

Even if overshooting and coming back down to 1.5C were technically possible, there’s no guarantee the consequences for ecosystems would be the same as if we hadn’t cross the 1.5C boundary at all. Whether or not climate change impacts are “reversible” is a very important research topic right now, says Schleussner.

Today’s study is an important first step to understanding the real-world consequences of what countries agreed to do, in principle, in Paris.

While it lays out the scientific reasoning behind a 1.5C target, the question of if and how we get there is part of a far bigger conversation, one that’s particularly pertinent as nations gather in New York this week to reaffirm their collective commitment.