Every night for the past year or so, Adriana and Omar Chavez have slept in an RV parked in East Palo Alto, a downtrodden community in Silicon Valley.

On a recent morning before sunrise, they emerged on to the empty street. Omar showed his phone to his wife: 7.07am. “Shall I wake up the girls?” he said, his breath visible in the freezing air.

He headed inside to rouse their three daughters, huddled together in the low-ceilinged bed just above the driver’s cab, and ready them for school. 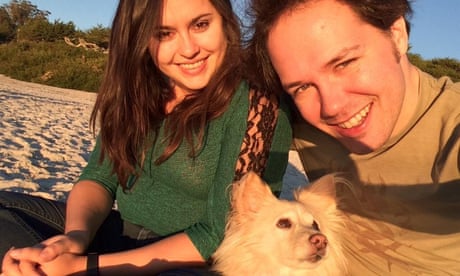 In most places, the Chavez family would be an exception. But in the school district that includes East Palo Alto, located amid the extraordinary wealth generated by the tech industry, their plight is not uncommon.

Remarkably, slightly more than one-third of students – or 1,147 children – are defined as homeless here, mostly sharing homes with other families because their parents cannot afford one of their own, and also living in RVs and shelters. The district is being squeezed from every side: teachers, administrative staff and even principals have housing woes of their own.

The circumstances of the crisis are striking. Little more than a strip of asphalt separates East Palo Alto from Palo Alto, with its startups, venture capitalists, Craftsman homes and Whole Foods.

East Palo Alto has traditionally been a center for African American and Latino communities. Its suburban houses are clustered on flat land by the bay, sometimes with no sidewalks and few trees, but residents say the town boasts a strong sense of cohesion.

Yet as in the rest of Silicon Valley, the technology economy is drawing new inhabitants and businesses – the Facebook headquarters is within Ravenswood’s catchment area – and contributing to dislocation as well as the tax base.

“Now you have Caucasians moving back into the community, you have Facebookers and Googlers and Yahooers,” said Pastor Paul Bains, a local leader. “That’s what’s driven the cost back up. Before, houses were rarely over $500,000. And now, can you find one under $750,000? You probably could, but it’s a rare find.”

Hernandez-Goff, who worked as a community organizer and in schools in northern California before becoming superintendent three and a half years ago, gives tech firms some credit.

Facebook recently announced it had committed $18.5m for affordable housing in the area. Meanwhile, the Chan-Zuckerberg Initiative, founded by pediatrician Priscilla Chan and Facebook founder Mark Zuckerberg, her husband, has funded programs in the Ravenswood district including literacy and leadership initiatives, Hernandez-Goff said, adding that she meets with Chan or her staff monthly.

For all that, Hernandez-Goff thinks the systemic problems – housing shortages, wage stagnation, inequality – are beyond her. Her focus is on the immediate needs of families.

She wants to open a school parking lot to cars and RVs at night, so families with children can sleep without being disturbed; she thinks lack of sleep and stress are contributing to her district’s low test scores. And she would like to install washing machines in schools for those without homes.

The Chavez family lost their home after Omar was injured, which prevented him from working – and then faced the area’s exorbitant rent costs. Average one-bedroom rents in East Palo Alto are above $2,200, according to the city, and money is tight for the couple. Adriana earns only $11 an hour at a day care. Their tired-looking RV, with its $1,000 price tag, seemed the most logical option for them and their kids.

“For them at the beginning, especially the youngest one, it was scary,” Omar said.

With the dawn sun only a gleam on the horizon, he turned on a generator so his daughters could use the lights. Soon after, a very small child came to the doorway. Her jacket was zipped up and she held a blue hair clip. Ariel, six, had been watching Zootopia on the TV inside.

The RV has almost no free space. The main cabin has two beds – one for the girls, and a second that converts into a table where the children do their homework. Omar cooks in a tiny kitchen, but because the refrigerator is broken there is no way to store fresh food. Bags of clothing are heaped on the floor, and the windows are sealed with aluminum tape for warmth. Omar sleeps in a back room crowded with belongings.

“The shower is here, but we turned it into a closet,” said Luna, five, pointing at a door. Instead, the family washes at a YMCA. They try to use the RV toilet as little as possible because the tank fills quickly.

The couple’s third daughter, Lannette, 15, was still in bed under some blankets. She was sick with what she thought was an ear infection. “It’s difficult,” she said of the living situation, “but at least I have somewhere to sleep.”

It’s difficult, but at least I have somewhere to sleep

Several homeless families whose children attend local schools told the Guardian that they had considered moving to cheaper real estate markets, such as the agricultural Central Valley, but there were no jobs there.

One man shares a single room with three children, in a house where three other families each have a room. Another woman lives with her partner and five children in a converted garage.

Even teachers are not immune to such difficulties. Ten of the staff who work on early education programs – one-third of the total – commute two or more hours each way a day because they cannot find housing they can afford.

Amanda Kemp, 47, is the principal of an East Palo Alto school. Based on her income, she says she has no option but to share a home with three other educators. “I was done with roommates in college,” she said. “Not once did I even think I would live with others unless it was a significant other.”

Hernandez-Goff hopes to build apartments for staff on land owned by the school district. She speaks of her students and employees as an endangered species, on the verge of extinction.

Their predicament is not abstract to her. “I love this place,” she said. “I wish I could buy a house here.”