More than a third  of all Americans may have PFAS-contaminated drinking water.  Harvard public health scientist say exposure of 1 ppt of PFAS is detrimental to human health.

I drove across the country with my daughter Holly last week to draw attention to the reckless behavior of the military as it continues to poison the waters in communities across the country.We billed our trip, “The Million Parts per Trillion Tour” because we stopped at eight extremely contaminated bases, all with more than a million parts per trillion (ppt) of deadly Per and Poly Fluoroalkyl Substances (PFAS) in the groundwater.

We worked with The Women’s International League for Peace and Freedom-U.S. and Civilian Exposure from Camp Lejeune, NC.

PFAS is found in the aqueous film-forming foam (AFFF) the military uses to extinguish massive fires during routine training exercises. The carcinogens are allowed to leach into groundwater and sewer water. PFAS is also found in Teflon products and other consumables. It is known as the “forever chemical” because it never degrades in the environment. It is the poison that poisons forever.

The former England Air Force Base in Alexandria, Louisiana was the most severely contaminated place we visited, with 10,970,000 parts per trillion of PFAS in the groundwater. We saw impoverished communities served by well water near that base. The press is silent, and people don’t know they’re being poisoned. Not a single soul we spoke to during our tour knew of the issue. Just 2 of 200 (mainstream, for profit) news agencies we contacted reached out to us, although they never ran a story.

The most minute traces of PFAS adversely affect women’s reproductive health and cause a variety of cancers. More than a third  of all Americans may have PFAS-contaminated drinking water.  Harvard public health scientist say exposure of 1 ppt of PFAS is detrimental to human health.

Throughout the country, the military is claiming it is free to continue using the foams and poisoning American communities. They say the chemicals are not regulated by the EPA or the Department of Agriculture so it’s OK to use them. Generally, the DOD refuses to pay for cleaning up the contamination or providing alternative drinking systems, aside from a few instances where they’ve provided bottled water to unfortunate souls.

The military’s potential financial liability is astronomical, and this partially explains the EPA’s steadfast refusal to institute a Minimum Contaminant Level (MCL) for the substances. Doing so would unleash a flood of litigation against the military here and around the world, particularly in Germany where the issue is gaining traction.

Curiously, our trip has led us to focus on what we don’t know.

We are witnessing a nightmare scenario in which state and federal regulatory agencies are at a standstill while the military, which continues using the toxins, is the lead agency in ascertaining the extent of the contamination and protecting human health.

The age of assuming the water is safe to drink in America is over. Don’t drink groundwater and don’t drink municipal water until you’re satisfied it is not contaminated with PFAS.

Please see the following summaries of each base we visited, including links to brief videos at each site. 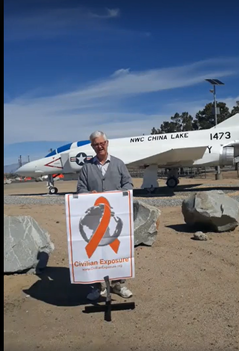 Officials at China Lake  downplay the severity of the problem. They say, “soil remediation technologies including isolation, capping, or excavation have
been demonstrated as effective.”  If it only were so simple.  See the conclusions from a report from the state of Michigan PFAS Science Advisory Panel. They’ve had a lot of experience with PFAS in Michigan.

Officials at China Lake also contend that the Navy phased out PFOS and PFOA and they now use “compounds that are similar but degrade easier, as they are not fully fluorinated.” Don’t be fooled! The new foams are also carcinogenic.  Every PFAS that has been studied is causing problems. Massive amounts of PFAS sampling have been found at Site 43, which is a former firefighting training area on base.
See video #1.  (Length 1:19) 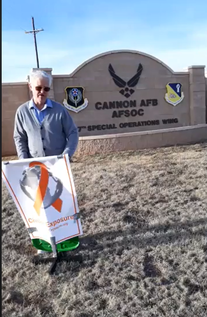 The Air Force had preliminarily agreed to clean up the PFAS contamination at Cannon and entered into discussions with the state over specific remedies, but then suddenly changed course in January 2019, suing New Mexico in federal court.

A ruling against New Mexico would remove the state’s authority to compel the Air Force to clean up PFAS under the state permit. The litigation came as a shock to New Mexico authorities. Dairy farmers are concerned for the health of their cows and poisoning of milk near Cannon. All of America should be paying attention to this.

In early February the New Mexico Political Report broke the story that samples at Holloman AFB were as high as 1,294,000 ppt. Like other bases, Holloman was left off the DOD March, 2018 report on PFAS

The contamination at Cannon and Holloman has been traced to pits where Air Force firefighters train to extinguish aircraft fires.
See video #2 (Length :45) 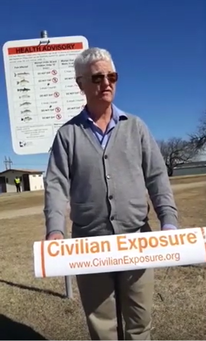 Stop #3 – Former Dallas Naval Air Station, Texas 1,247,000 ppt. When the Navy closed the base in 1998 it tried to leave without paying hundreds of millions to clean up the soil and groundwater that is heavily contaminated with carcinogenic PFAS and other poisons. The city of Dallas sued and the Navy agreed to pay the city $18.55 million for ignoring environmental laws. But that was then.

In 2002, the Navy agreed to clean up the contamination by 2017 but failed to do so. According to letters between the Navy and the city in 2017, the Navy says it could take15 more years to get the job done. The Navy explained that it had already spent $105 million in clean-up costs, and blamed their refusal to live up to the agreement on “ambitious remedial goals” it agreed to in 2002.

The city says the Navy has not developed a plan to finish the cleanup.

The old base is located on the shore of Mountain Creek Lake, a seriously contaminated body of water.  Today, the Texas Parks and Wildlife Department warns the public not to eat the poisonous fish caught in the lake, although locals there say they do anyway.    See video #3 (Length :37) 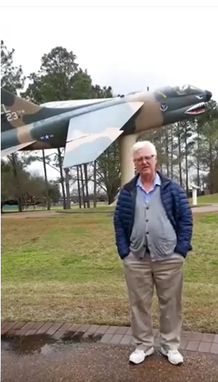 Stop #4 – Former England Air Force Base, Louisiana 10,970,000 ppt. Former England Air Force Base near Alexandria, Louisiana is the most contaminated place on our nationwide tour and perhaps, anywhere on earth, with deadly PFAS found in the groundwater at 10,970,000 ppt. The facility was closed as an Air Force base in December 1992, but the poisons are still present. They never break down in nature.

Philippe Grandjean of the Harvard T.H. Chan School of Public Health, and Richard Clapp of the University of Massachusetts at Lowell, calculated that an approximate safe dose of  PFOS and PFOA in drinking water is 1 ppt.  These contaminants are with us forever and most of us already have concentrations of these chemicals in our blood.

The Agency for Toxic Substances and Disease Registry (ATSDR) has set drinking water guidelines of 7 ppt and 11 ppt for PFOS and PFOA, respectively. Meanwhile, the EPA advises that drinking water not exceed 70 ppt. The EPA has refused to set a mandatory Maximum Contaminant Level, (MCL).

There’s been nothing in the press about England AFB regarding the DOD Report in March, 2018 detailing the exorbitant level of contamination at the base. See video #4 (Length :52) 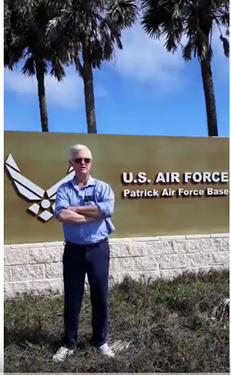 Cancer-causing chemicals linked to firefighting foams in use at Patrick Air Force Base are widespread in Cocoa Beach’s groundwater and sewage system. The barrier island’s water table is severely contaminated. Groundwater monitoring wells near the city’s sewage treatment plant and golf course are contaminated.

More than 400 cancer cases from the past and present have been reported from individuals who live in the greater Satellite Beach, Cocoa Beach, and South Patrick Shores area, according to Florida Today. Some of the reported cases are extremely rare with multiple diagnoses of these in specific areas.

PFAS contamination is spreading throughout Brevard County, tests show. The deadly chemicals are also widespread in Indian River Lagoon.  Scientists have found the compounds in alligators at Kennedy Space Center.

The Air Force refuses to comment  on the contamination. It is unlikely that the DOD will pay for the toxic cleanup or take care of those sickened, considering its refusal to do so in other communities around the country.    See video #5 (Length :22) 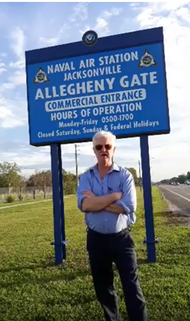 Stop #6 – Jacksonville Naval Air Station, Florida 1,397,000 ppt.According to First Coast ABC News on August 17, 2018, the Navy was preparing to test 24 private groundwater wells. Adrienne Wilson of the Naval Facilities Engineering Command (NAVFAC) told ABC News that the agency was still in a fact-finding phase. “I wouldn’t say ‘concerned.’ We don’t know. So, until we sample those wells and find out some information, we’ll find out from there.”  There’s been no mention of PFAS in the local press since then. The Navy has known of the devastating impact of PFAS on people and the environment since 1974.

The Navy says it is not concerned, and they have no reason to be concerned. They have no liability. They’re free to poison us.

In August of 2018, the Naval Air Station Jacksonville circulated a Drinking Water Investigation Fact Sheet that informed the public, “The Navy is requesting permission to sample drinking water obtained from private wells within a designated area near Jacksonville Naval Air Station.” The Navy only tested areas south of Longbow Rd. and Pirate’s Cove Rd. off of Rt 17 north of the base.

Plumes of groundwater PFAS contamination are known to travel much further. 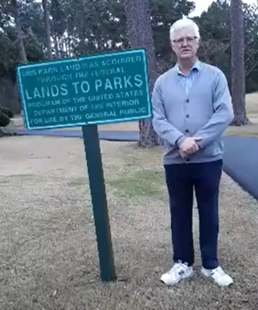 Stop #7 – Myrtle Beach Former AFB 2,640,000 ppt. In 2010 the Air Force completed the transfer of the Myrtle Beach Air Force Base to the Myrtle Beach Air Force Base Redevelopment Authority. The base shut down in 1993 while it was heavily contaminated with PFAS as a result of the routine use of aqueous film forming foam (AFFF) that was allowed to leach into the area’s groundwater and is still prevalent today. The old base is now the site of a new commercial air terminal, over 1,200 homes, and more than 300,000 square feet of commercial space.

At the time of the final land transfer in 2010, the Air Force had spent $60.1 million to clean up 192 contaminated sites, with 16 hazardous sites  remaining open.

According to the Defense Environmental Restoration Program The final cleanup of the fire training area is expected by September, 2021, although the astronomical concentration of these contaminants that never break down in nature is likely to require generations to remediate, if it is ever possible.

Fire Training Area #4, located about a half-mile behind Midway Park off of S. Kings Highway, was used for routine fire training from 1970-1981.The procedure utilized in the fire training areas was to construct an earthen dike approximately 12 to 18 inches high in order to contain the fire and to pour several hundred gallons of contaminated jet fuel onto the soil within the dike and set the fuel on fire. The carcinogenic foams were used to extinguish the fire in routine drills. The deadly chemicals saturated the soil and were allowed to leach into the ground. See video #7 Length 1:53)

Stop #8 – Langley AFB, VA 2,200,000 ppt  By the end of 2016, Langley had spent $785,000 investigating PFAS contamination, but nothing on mitigation actions. There have been no reports in the press regarding the 2.2 million parts per trillion of PFAS found in Langley’s groundwater. It’s just not an issue.