Excerpt from The Guardian, by Daisy Kendrick, 14 June 2017

Only 11% of the globe’s NGOs employ a designated full-time or part-time social media manager.  That means they’re losing the 28% of young people that use social media as their primary news source. It means they’re missing out on the 43% of millennials that are driven to make financial donations through social channels, the one in two who’ll share ideas with their friends online, or most importantly the one in three willing to donate their time.

Young people aren’t a “nice to have” when it comes to sustainability action and climate change. As 27% of the global population – how we choose to work, eat, drink and spend our money will change the whole ballgame.

Recent research demonstrates that one in seven millennials around the world identify as “activists” and half of those recognise their activism as an important part of who they are. It’s one of the many reasons the likes of Apple, Facebook and Goldman Sachs are prioritising their environmental focus despite Trump’s actions – they know it matters to their future customers and workforce.

While many headlines have been written about the eight-second attention span of the social media-obsessed, there is another way of looking at it – it’s also a highly developed eight-second filter.

This generation has more information thrown at them in a day than people living a hundred years ago would come across in a month. We’ve become highly adept at prioritising content, and when content is important, we engage and act.

Throwing budget at social media channels isn’t a fix-all – this campaign will also be led by the brands, businesses and communities that tackle the issue with creativity and innovation.

It’s vital that we update and rethink our approach to climate and conservation, to make it the issue that mobilises this new tide of activists.

The populations of small islands and developing states are faced with the prospect of becoming climate refugees, as rising seawater levels are threatening widespread flooding, contaminating drinking water supplies and destroying arable land.

My generation was born into a world where climate change is an immutable fact, not a theory to deny or accept, but a global threat, the effects of which we can see. We’ve got to make this the issue we tackle and overcome.

Take the United Nations Ocean Conference. It’s the UN’s first ocean-focused conference, and it has come at the right time.  Henderson Island, a tiny landmass in the eastern South Pacific was found by marine scientists to have the highest density of anthropogenic debris recorded anywhere in the world.

Videos of the 18 tonnes of plastic piling up on an island otherwise untouched by humans, shared millions of time across social media, are a visceral reminder of the consequences of our one-use throw-away attitude to plastic consumption.  Plastic is deadly for fish and marine life, threatening the food supply of the 1 billion people who depend on it as their principle food source and damaging the global food chain for us all. 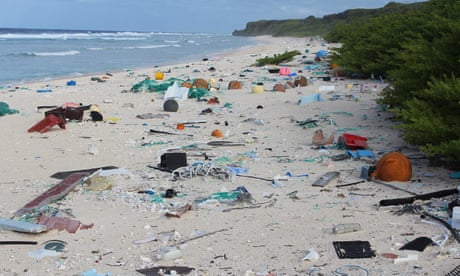 Yet, across the US, 500m plastic, non-biodegradable straws are used every day – for only a few minutes. In the UK, households throw out 40kg of recyclable plastic every year.  If we don’t act soon the World Economic Forum predicts that plastic will outweigh fish in the oceans by 2050.  Henderson Island has put the issue of plastics pollution on the global agenda – now it’s time for systematic behaviour change.  The key to success of the UN Ocean Conference won’t lie in agreements made or accords signed. What we need are innovative solutions – that will capture the attention and imagination of my generation.

The only way to seriously cut plastic consumption is by activating young people to bring about change. That’s change, not just as consumers, but as the people now entering management roles at the big businesses, manufacturers and retailers with the power to innovate supply chains and start evolving the world’s relationship with plastics and fossil fuels.  It might sound like an unachievable feat, but there’s good news. As the likes of Pepsi and Heineken have noticed (however controversial or limited their outputs) this generation wants to make change.