California may be ground zero for car culture in the US, and Los Angeles may be the epicenter of car culture in the Golden State. It’s been that way since the end of World War II, actually. In fact, the era of easy personal mobility has engulfed the city and the surrounding area in endless traffic jams. They are so frequent and so infuriating, the nonstop congestion in the area is what led Elon Musk to conceive the idea for the Hyperloop, an underground network of tunnels that would allow people to bypass the insanity on the streets above. 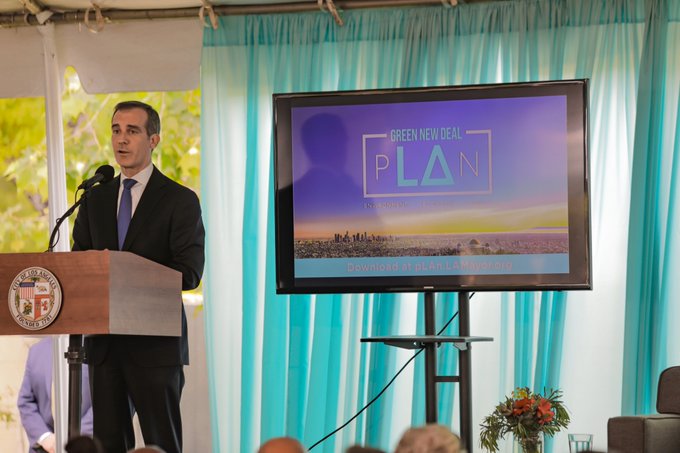 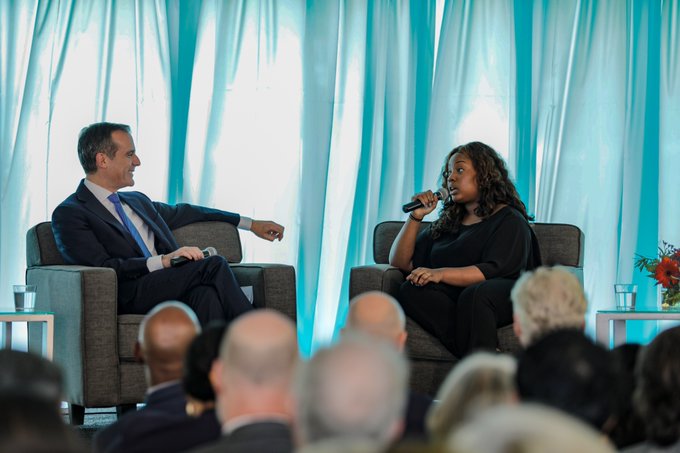 There is no greater threat to our security, to our economic growth, to the survival of future generations than #ClimateChange. I’m announcing #GreenNewDealLA to lay out an aggressive plan to not just survive global warming, but to ensure that L.A. thrives. http://pLAn.LAMayor.org

LA Mayor Eric Garcetti is proposing his own version of a Green New Deal. If he gets his way, the impact on personal vehicles will be profound. Among other things, Garcetti’s plan calls for 80% of the vehicles in LA to be powered by electricity or zero emissions fuels by 2035. That’s just 15 years from now, folks. Which means there are going to be a lot of changes in La La Land coming soon. The plan calls for the city to be carbon neutral by 2050.

“Politicians in Washington don’t have to look across the aisle in Congress to know what a Green New Deal is — they can look across the country, to Los Angeles,” Garcetti said — an obvious jab at Congressional Republicans who are still marching in lockstep to the tune called by the Koch Brothers and other fossil fuel interests.

“With flames on our hillsides and floods in our streets, cities cannot wait another moment to confront the climate crisis with everything we’ve got,” Garcetti said. “L.A. is leading the charge, with a clear vision for protecting the environment and making our economy work for everyone.”

The Detroit News has more on the transportation part of the plan (below). The city expects to

As reported by Grist, the Green New Deal proposed by Garcetti will

The LA Green New Deal is expected to save 1,600 lives and 660 trips to the hospital each year, and avoid $16 billion in health care costs for city residents by 2050. By that date, every building in the city is expected to produced no carbon emissions, and the city will have stopped sending any trash to landfills. Garcetti says the LA Green New Deal will create 400,000 jobs in green industries as well.

That latter point is important. As commentator John Russo writes, workers who fear losing their jobs will oppose plans like the Green New Deal if they do not see path for them thrive financially in a nascent green economy. “Working-class people and their communities are harmed by both environmental and economic injustices, and they have few economic choices. Solutions that might seem obvious, like ending the use of coal, can come with real costs — like loss of jobs.”

“To build a just and inclusive movement to fight climate change and overcome past environmental classism, we need empathy, shared values, and organizing.” Russo adds. “This is what the Green New Deal promotes. In a short film about the resolution, Ocasio-Cortez imagines a green future that links carbon use with job guarantees that provide workers with good wages and benefits. But the GND’s most important contribution may be its call to build an environmental movement where no one is left behind.”

The Sierra Club has given the Garcetti plan a ringing endorsement, but other environmental groups claim it is too modest to be effective. In a statement, the LA chapter of the Sunrise Movement says, “Our generation’s future, as well as the future of Los Angeles and of the world, depends on us reaching net-zero greenhouse gas emissions by 2030. This is not a goal — it is a deadline. With Mayor Garcetti’s current plan for net-zero emissions by 2050, Los Angeles is on track to be 20 years too late. That is not a Green New Deal.”

The Sunrise Movement has a point. With many major international climate groups saying the world has less than 12 years to get its house in order, plans that don’t reach fruition for 30 years are just greenwashing or window dressing. Take your pick. Despite the grand pronouncements by LA and New York City, the sense of urgency still does not match the seriousness of the challenge. Perhaps humanity’s epitaph will be, “We waited too long. Sorry. Better luck next time.” 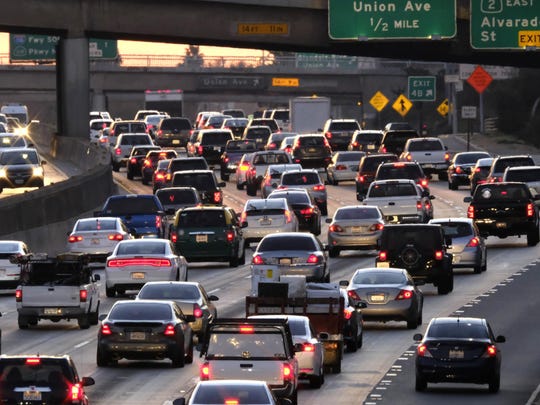 The mayor’s sustainability plan imagines a city where, by the mid-2030s, 80% of the cars run on electricity or zero-emission fuel, 80% of the electricity comes from renewable sources and Angelenos drive 2,000 fewer miles each year than they do now. It’s a far cry from today’s L.A., where gridlock, tailpipe pollution and smoggy air have come to define a way of life.

Garcetti cited the “existential threat” of climate change, which scientists say is fueling bigger and deadlier heat waves, wildfires and floods in California and around the world. He said he worries that if Los Angeles doesn’t take aggressive action now, in 50 years the city will have little time for priorities other than survival.

“Los Angeles needs to lead, but the whole world needs to act. This plan gives us a fighting chance,” Garcetti said in an interview. “It’s sort of a ‘greenprint’ for every other city in the country and the world, hopefully.”

Garcetti is pitching the plan as L.A.’s version of a Green New Deal, the set of climate change and economic justice policies popularized by progressive activists and championed by Rep. Alexandra Ocasio-Cortez (D-N.Y.).

City Hall may have limited control over whether L.A. meets many of the targets in the plan, which updates a previous sustainability road map from 2015 and has been in the works for several years, before the phrase “Green New Deal” entered the national lexicon.

At times, the plan simply reiterates existing commitments on climate and clean energy, and details for how many of the goals will be achieved are yet to be determined.

But in at least two areas, the plan sets ambitious new targets and lays a foundation for how they might be met: transportation and buildings, which account for three-quarters of the city’s planet-warming emissions.

On the transportation front, the mayor’s office hopes to reduce the amount of time Angelenos spend driving, from an average of 15 miles a day now to 13 miles by 2025, and 9 miles by 2035. The plan envisions making that possible largely through initiatives already underway, including a massive build-out of public transit and a proposed “congestion pricing” pilot that would make driving more expensive in some traffic-choked areas.

Choosing a car can be a financially fraught, and intensely personal, decision. But the costs of battery-powered cars continue to fall, and city officials say they can accelerate the transition.

The mayor’s plan sets a target of 28,000 publicly available electric-vehicle chargers by 2028 — up from 2,100 today — with the city streamlining permitting for chargers, expanding rebate programs and requiring more chargers through the building code.

The Department of Water and Power will also develop incentives for customers to buy used electric vehicles, according to Lauren Faber O’Connor, the city’s chief sustainability officer, who helped craft the mayor’s plan.

“We know that the secondary market is really important to proliferate the adoption of EVs,” she said.

The plan also mentions self-driving cars, saying the city should “ensure all autonomous vehicles (AVs) used for sharing services will be electric by 2021.”

Antonio Bento, an economist who leads USC’s Center for Sustainability Solutions, described the goal of 80% zero-emission cars by 2035 as “overly optimistic” and unlikely to be met. But setting such a lofty target could still do a world of good, Bento said, because it sends a message to the private sector that one of the globe’s most car-dependent cities is moving away from oil as quickly as possible.

“The rest of the world, when it comes to these types of policies, they look at Southern California for guidance,” said Bento, who is working with former Gov. Arnold Schwarzenegger and former state Senate leader Kevin De Leon on an initiative to help local governments speed the adoption of cleaner transportation options. “What appears to be a policy set by one city could quickly grow to capture a large part of the automobile market.”

Garcetti’s sustainability plan also calls for all new buildings constructed in the city to be “net-zero carbon” by 2030, with the city’s entire building stock converted to zero-emission technologies by 2050. That’s also likely to be a huge lift, because it could require households, landlords and buildings owners to replace all gas-powered heating and cooling systems, clothes washers, dishwashers and stoves with electric appliances or cleaner fuels.

Faber O’Connor, the city’s chief sustainability officer, said eliminating planet-warming carbon emissions from buildings may not be as hard as it sounds. She expects building codes and rebates to do the bulk of the work, with homes and businesses installing electric appliances over time as gas-powered appliances break down.

State officials are also beginning to develop policies to electrify buildings, which are collectively responsible for a quarter of California’s greenhouse gas emissions. Those efforts have faced pushback from Southern California Gas Co., which sees electrification as a threat to its business model. The gas company has talked up the benefits of replacing the natural gas in its pipelines with so-called renewable gas or, eventually, hydrogen.

Some researchers agree with SoCalGas that substituting cleaner fuels for gas would be easier and cheaper than swapping out gas for electricity. They include Jack Brouwer, a UC Irvine engineering professor, who has led a project to inject small amounts of hydrogen into the university’s gas pipelines.

“Our policy goals cannot be met without hydrogen, is my view,” Brouwer said in an interview last month.

But most clean energy advocates and a growing number of state policymakers disagree, raising questions about the costs and available supply of renewable gas and hydrogen. In a report last summer, the California Energy Commission described a “growing consensus that building electrification is the most viable and predictable path to zero-emission buildings.”

Faber O’Connor said Los Angeles officials “believe that electric will be the predominant solution, and we will be designing incentives in that direction.”

A study released this month by the consulting firm Energy and Environmental Economics found that newly built all-electric homes in California can save residents $130 to $540 per year, and that the vast majority of single-family homes with gas furnaces and air conditioners would save money by replacing those systems with electric heat pumps.

Switching to electricity is “cost-effective in many situations already, even before the market transformation that’s going to further bring down the costs,” said Pierre Delforge, a senior scientist with the Natural Resources Defense Council, who helped review a draft of the electric utilities’ study. “It doesn’t mean it’s cost-effective everywhere yet. But it’s quite promising, because we’re right at the beginning of that technology adoption.”

Delforge said the zero-carbon building plan announced by Garcetti “seems to be aligned with our climate goals, and it seems to be ambitious, particularly for existing buildings.”

“It means we have 30 years to transition the entire building stock to zero emissions. That’s a challenge, and it’s important to get started now,” he said