The IPCC claims in its latest report that action must be taken to avert global warming of 1.5 degrees Celsius by the end of the century — a benchmark it says comes with costly climate consequences. Its recommendation: a carbon tax of as much as $200 per ton of carbon dioxide emissions by 2030 to an astonishing $27,000 per ton by 2100.  For American families, this could mean the price of gasoline soaring to $240 per gallon. Remember when we thought $4 per gallon was high?

The IPCC’s recommendations should be taken with a grain of salt because of seriously flawed economic models. But we must take a carbon tax seriously, as the idea gains traction. What would a carbon tax mean for American families?

Concrete is one of the most common carbon-intensive products due to its production process. When was the last day you didn’t have contact with concrete? Homes, businesses, and roads — all built with concrete, and all incredibly important for economic prosperity — would undoubtedly rise in cost because of a carbon tax.

Take a new home of 3,000 square feet. A simple slab foundation (with no basement) could use 100 cubic yards of concrete. Adding a $370 tax per cubic yard for a ton of carbon based on the $200 rate above would mean the cost of that home would likely rise $37,000. New commercial buildings, with foundations and big parking lots, would be astronomically more expensive.

Let’s include highway construction. We’re seeing more and more 12-lane highways in our cities. Each mile of building such a highway requires almost 31,000 cubic yards of concrete, which could come with a total carbon duty of more than $11 million – that’s on top of normal construction costs.

While production of concrete is just one example, it highlights how a carbon tax could affect Americans far beyond the energy sector, where the vast majority of carbon dioxide emissions originate. When energy is included, particularly the affordable, reliable energy provided by fossil fuels that have allowed millions to rise up from poverty, the demands made by the IPCC guarantee economic decay.  Carbon taxes in Australia and British Columbia reduced standards of living, with Australia eventually repealing its carbon tax within just two years.

According to the Australian government, when the tax was repealed, families felt immediate and significant relief.  “Treasury has estimated that household costs should on average be about $550 lower in 2014-15 than they would be with the carbon tax,” a report from the Department of the Environment found. “On average, household electricity bills are estimated to be $200 lower and household gas bills $70 lower than they would be with a carbon tax in 2014-15.” It also found that “Removing the carbon tax eliminates an administrative and compliance burden on business, which is estimated to cost $85 million per year.”

Vance Ginn (@VanceGinn) is Director of the Center for Economic Prosperity, and Senior Economist and Elliott Raia is a Policy Analyst for Federal Affairs, both at the Texas Public Policy Foundation.

In the aftermath of the IPCC 1.5 C report, carbon taxes have looked to many in climate despair like a flare of hope — including a long discussion on the New York Times podcast The Daily that prompted about a dozen friends to email me asking about the new Nobel economics laureate William Nordhaus and his proposal for a carbon tax. That proposal was also endorsed on my favorite podcast, Vox’s The Weeds. Even Exxon, that climate villain, is now lobbying on behalf of a carbon tax — which might seem like a remarkable turn for a fossil fuel company, until you consider that they are hoping to trade that tax for corporate immunity in any climate-change lawsuits that might target them in the coming years. Should we take that deal?

Probably. That’s because climate change is an all-encompassing threat and we are, as the IPCC says, at the all-hands-on-deck, every-little-bit-helps stage of the crisis. But carbon pricing is no cure-all, and market forces, even when channeled toward the right goals on climate, are no surer bet to solve the problem of global warming than they were to solve problems like slavery, gender and racial injustice, or genocide. Which all makes me suspicious of any kind of grand bargain that nets only a modest tax on emissions.

That suspicion is twofold. First, as a way to impose at least some of the cost of carbon emissions on those who produce them, taxes are, absolutely, necessary. But even at very high rates, they seem to me insufficient to solve a problem this big. How big? The IPCC, not a hyperbolic body, offered a very clear analogy: a global mobilization like that which transformed the economies and cultures of the Allied nations during World War II. That this is a familiar analogy is unfortunate, because it blunts the intended impression: That mobilization was unprecedented in human history before and has never been matched since. We did not defeat the Nazis with a change to the marginal tax rate. Higher government revenues helped, of course, but only helped: There was also a draft, a nationalization of industry, widespread rationing. And while an ambitious carbon-pricing plan would push the world toward more green-energy innovation, it’s an open question just how fast market forces would work toward the necessary changes.

In part that is because the market, so far, has not delivered on climate. You have probably heard a lot about the green-energy revolution of the last couple of decades, which has yielded productivity gains in energy and cost reductions far beyond the predictions of even the most doe-eyed optimists. But it has not even bent the global curve of carbon emissions downward. In terms of emissions, we are, as a world, still growing, still making climate change worse. Over decades, the proportion of global energy use derived from renewables has not grown much. Which means that, billions of dollars and thousands of dramatic breakthroughs later, the planet is not really farther along than when hippies were affixing solar panels to their geodesic domes. In fact, it is less far along, because the market has not responded to these developments by seamlessly retiring dirty-energy sources and replacing them with clean ones. It has responded by simply adding the new capacity to the same system. To the market, this is growth; to human civilization, it is something close to suicide. We are now burning 60 percent more coal than we were just in the year 2000.

And energy is, actually, the least of it. We also need overhauls of the world’s transportation systems, its agriculture, its industry, and its infrastructure. If the cement industry were a country, it would be the world’s third-largest emitter, and China now pours more concrete every three years than the United States poured during the entire 20th century. Cryptocurrency now produces as much CO2 each year as a million transatlantic flights, and each round-trip flight from New York to London costs the Arctic three square meters of ice. Every year the average American emits enough carbon to melt 10,000 tons of ice in the Antarctic ice sheets — enough to add 10,000 cubic meters of water to the ocean. Every minute, we add five gallons.

The scale of the technological transformation required to change all that dwarfs every technological revolution ever engineered in human history, including electricity and telecommunications and even the invention of agriculture 10,000 years ago. By definition, it dwarfs them, because it contains all of them — every single one needs to be reimagined and rebuilt from the foundation, since every single one breathes carbon like a ventilator. It took New York City 45 years and $4.5 billion to build three new stops on a single subway line. It’s obviously possible that project might’ve been completed more quickly, and more affordably, if undertaken by private enterprise. But the world has about 30 years, it is estimated, to entirely remake its infrastructure, agriculture, industry, and consumer culture. If you can imagine a tax rate on carbon that would produce that kind of revolution in just three decades, you have a better imagination than I do.

This is the second reason to be suspicious of carbon taxes as a grand solution: at the level politicians are likely to find workable, they may not have much impact at all on emissions. There are today, in fact, many nations with existing carbon pricing — India, Japan, Denmark, France, Germany, to name five. None of their emissions are declining, let alone rapidly enough to make the goal of zeroing out on carbon by 2050 seem at all feasible. And, as with any policy fix, a carbon tax is subject to political gamesmanship; Australia instituted a tax in 2012, saw its emissions fall, then abolished it in 2014, and watched them rise again. For his part, Nordhaus has identified a price he considers “optimal” — between $35 and $229 per ton of CO2, a price that, by his own estimate, could result in 3.5 degrees Celsius of warming by 2100. That is more than enough warming to make many of the cities of the planet’s equatorial band unlivable, inflict large-scale droughts and famine, flood megalopolises from Miami to Bangkok, and, over centuries, raise sea levels by as much as 200 feet.

Which brings us to perhaps the most important question about carbon taxes, especially at moderate levels: Where would the money go? There are those who advocate sending it directly back to citizens, as Alaska does with its oil revenue, to generate public support for the tax; but this could have the perverse effect of leaving fossil-fuel consumption patterns largely undisturbed. Others, on the left, have proposed using the revenue to fund an expansion of the welfare state, which would be laudable but would also blunt the impact, if the purpose of a carbon tax is actually to punish emitters rather than find new revenue streams to fund existing political priorities.

A simpler solution may be in plain sight. By some estimates, the cost of building a planet-wide fleet of carbon capture machines capable of sucking enough CO2 out of the air to neutralize our current emissions and buy ourselves time to remake modern civilization would cost about $30 trillion. Estimates for how much governments today subsidize fossil fuels globally run as high as $5 trillion. We can work with that math.

Of course, there are political obstacles there, too — and those numbers may prove to be underestimates. But there is, actually, reason for optimism, as the incredible 15-year-old climate activist Greta Thunberg reminds us — the tools are there, from carbon taxes to more green investment and possibly (even probably) carbon capture. “The climate crisis has already been solved,” she said this past weekend, in front of a crowd of 10,000 in Helsinki. “We already have all the facts and solutions. All we need to do is to wake up and change.” 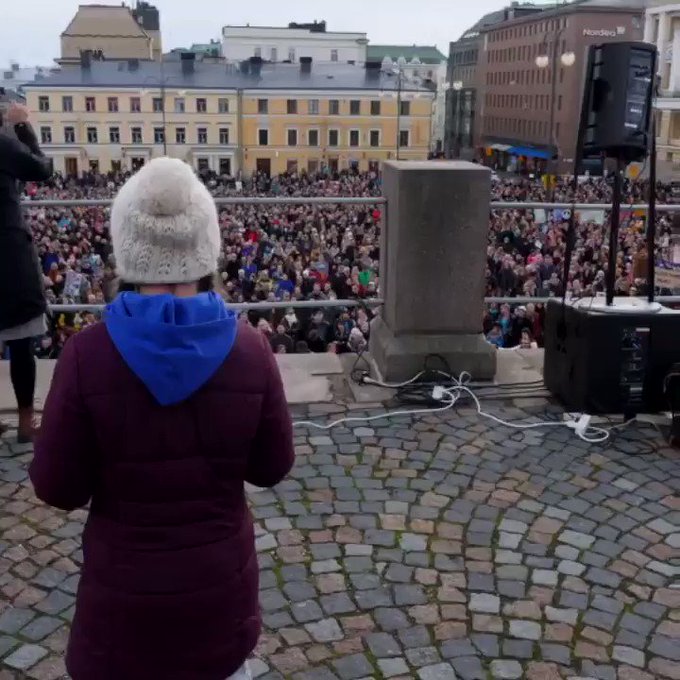 Some people say that we should study to become climate scientists so that we can “solve the climate crisis”. But the climate crisis has already been solved. We already have all the facts and solutions. All we need to do is to wake up and change.