Ed Lehman is a Canadian Communist, and a comrade of mine. I don’t say such things often or lightly, especially about Westerners. But he became my comrade, and we struggled shoulder to shoulder, for five days. Not in the South American wilderness, not in Afghanistan or Syria, but in Regina, a small Canadian city, the capital of the province of Saskatchewan.

I admit, before being invited there, I knew close to nothing about Regina. I did not even know how to pronounce it, correctly. But one day, an email arrived, and I was invited to become a keynote speaker at the Peace Conference there – in Regina. Spontaneously, I accepted.

The peace conference was called “Yes to Peace and Progress – No to NATO and War!” 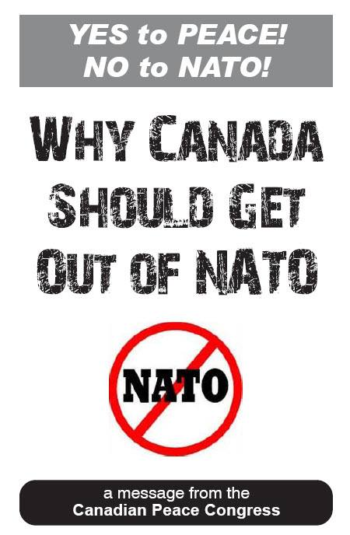 I usually do not speak at peace conferences. I have always believed that oppressed and colonized countries have to fight for their independence and freedom, and that peace as it is propagated in the West is something that basically upholds the status quo. It is, as I mentioned in Canada, “when the bombs are not falling on Paris or Toronto”. It is when the wretched of the earth are dying quietly and obediently, far away from camera lenses, in their looted countries and continents.

Actually, many peace movements in the West annoy me to the extreme. Their lack of sensitivity, as well as ignorance, are maddening. The desire of their members to ‘do good’ and ‘feel good’, is often self-serving, and has absolutely nothing to do with the struggle for justice in dozens of colonized, and plundered ‘client’ states.

But there was something very different in what I detected while reading the invitation from Regina. The organizers were actually talking about justice, not just about stopping conflict. They were full-heartedly defending Venezuela. And their main goal was to dismantle NATO, or ‘at least’ to convince Canadians that their country should not participate in the bloodstained ‘adventures’ which are ruining the lives of hundreds of millions of people all over the world. I felt that I was being approached by the real and solid Left. And therefore, without much hesitation, I accepted.

The program was mildly insane. In two Canadian cities – Regina and Winnipeg – I literally had to speak day and night, addressing the Peace Conference, a rally (called “No to NATO! No to “Regime Change Politics!” in downtown Regina in Victoria Park at the Cenotaph to the fallen soldiers of World War 1 and 2, Korea, and Afghanistan), as well as to students and professors at three universities and one high school. Simultaneously, I had to give interviews to both the printed media and radio stations. I was asked to show to the public two of my documentary films; one about North Korea (DPRK), and one about the devastating poverty and AIDS epidemic in the region of the African Great Lakes.

Why am I writing this; why do I give this detailed list of events? For one simple reason: it appeared to me that Canada is actually very different from the United States, despite its geographical proximity, and despite the fact it elected its embarrassingly right-wing government. 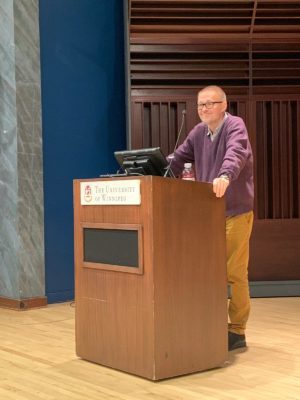 Author addressing students and professors at University of Winnipeg

First of all, Canadians do listen. They may not always agree with Communist, revolutionary thinkers like me, but they do sit down, concentrate and listen to you. They want to know; to understand. That is already very impressive, in a world which is brainwashed by the Western propaganda.

But there is more that I noticed while there: unlike in such places like California, no one here says to me: “Thank you for coming, but please do not show us too much blood and too much suffering. We won’t be able to take it” (precisely the comments that I once received in the US, when I was going to show some video clips from my film “Rwanda Gambit”).

If you tell a Canadian audience: “Look, you are participating in several massacres committed by NATO, and I will show you what people in these countries have to endure,” many Canadians will not say ‘no’; they will sit there and listen to you, and if necessary, they will watch what you want to share with them.

And I am grateful for this, and I am also impressed. It is ‘much more’ than what I have encountered in many parts of the West. 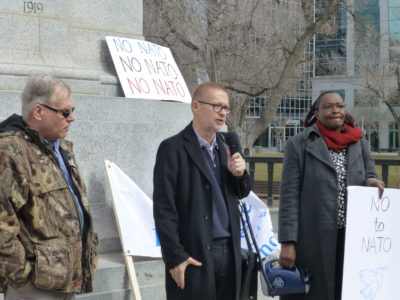 Another impressive fact is that Winnipeg is not a large city, and Regina only has some 200,000 inhabitants. Yet both cities have a truly vibrant intellectual life. They have highly educated and informed individuals who clearly oppose the Western regime and global dictates. They have people who struggle against the regime.

And what I also noticed: our conference, organized by the Regina Peace Council (of which Ed Lehman is President),was covered by the local ‘mainstream’ media, by the Regina Leader Post, for instance, which offered a sympathetic account in an article “Group of Reginans protest Canada’s involvement in NATO”. The newspaper had no problems disseminating my ideas, either. The same goes for the local community radio station. And Erin Weir, an independent Member of Parliament, who represents the Regina-Lewvan constituency – personally brought sincere greetings to the conference. 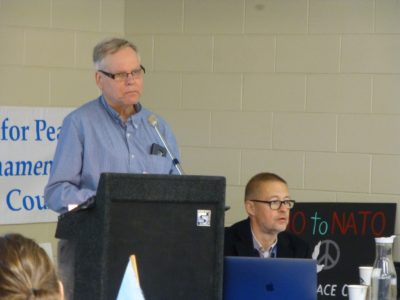 I often speak at universities, worldwide. But in Regina I was even invited to address a class of high school students, who were able to formulate and ask very relevant questions.

I don’t want to say that in Canada ‘I participated in mainstream events’, but in both Regina and Winnipeg, I was ‘allowed’ to interact with, and to influence various professors, students, and through media outlets, even the local public.

Anti-war activists here have their Saskatchewan Peace News publication, which is now in its 26th year of existence. As well as reporting on local peace events, it exposes ideas that cripple the peace movement; the doctrine of “Responsibility to Protect” and “humanitarian interventionism”, as Dave Gehl in his speech said “A 21st century version of “The White Man’s Burden”; and is used as an organizer of peace events.

For Ed Lehman, ‘peace’ is not just a pretty word or a slogan, and he is not the only one in Regina, who think this way. He believes that:

Today’s progressives need to unite the fight for peace with the fight for social and economic advance with the fight against climate crisis and the battle against racism. Deep transformation of the economic and social system is required in North America for justice to prevail; we saw in the thirties, forties, fifties and sixties that even in the belly of the beast, victories can be won.

Justice and racism… Unfortunately, racism is not just an ugly word here in Saskatchewan and in Canada in general. It is a reality, a shame. Many of the First Nation people, or call them original inhabitants of Canada, are still living in appalling misery, suffering from discrimination, as I was told by Julie Peebles, a young woman with a great concern for the life-situation facing Canada’s aboriginal population, who noted the similarities between AIDS as depicted in my film on Kenya and the situation in Saskatchewan. Here, indigenous people are facing social conditions similar to those in the poorest countries on earth. 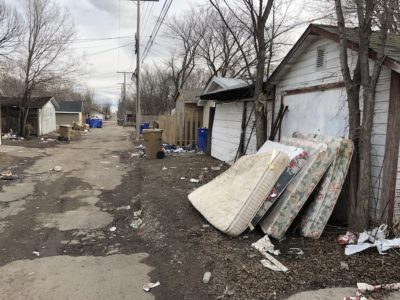 I suggested, first jokingly, that I should return to Regina, later this year, in order to make a short documentary depicting the plight of the First Nation: “Wouldn’t that be embarrassing: a Russian travelling here, and doing precisely what should be an obligation to any decent Canadian filmmaker?” It was not taken lightly: the people of Regina full-heartedly welcomed my proposition, offering help, support; both moral and practical (like lodging me, driving me around, identifying important locations for my film). And now, I am seriously determined to come back and to help.

After the event, and after my departure, many public figures praised the dedicated work and struggle of the Regina Peace Council. One of the letters stated:

RPC once again has demonstrated to the entire peace movement the possibilities that exist and can be realized from careful and thoughtful organizing and mobilizing of public peace action efforts and in particular by inviting the new generation of peace activists and dedicated anti-imperialist voices to the platform.

The Regina event coincides with other international efforts underway and under-reported by the corporately owned and controlled mass media.

NATO, promoted by the corrupt finance capitalist, political media cabal, as a defensive alliance, is gradually being exposed for what it truly is, the imperialist gendarme and provocateur of US inspired wars, including its most terrible form, nuclear war. Canada has no future and certainly no security so along as our country continues to be part of US-led NATO.

Ed Lehman himself proved that he is not only a dedicated fighter, but also a constructive optimist. After I departed, he wrote to me:

The left has had a tremendous impact in Canada in the last hundred years. Without the struggles of the working class, militant farmers, progressive intellectuals, the indigenous population, and others, our country would not have the social programs and rights that so many here are taking for granted today. Now more and more there is a crisis of everyday living facing the nation as the result of the impacts of neo-liberalism and neo-globalism on our country. The left, and in the first place the Communists, have the task of giving strong leadership in the struggles against climate catastrophe, for a Canadian foreign policy based on peace and disarmament, and for socialism as the solution to the problems faced by Canadians. With a socialist vision and optimism, the working people of Canada will chart a new course for our country.

In Winnipeg, I publicly confronted the former Canadian Ambassador to Venezuela, Ben Rowswell, (watch here), a man who has already caused great damage to various non-Western countries, and who is still continuing with his destructive labor.

I also delivered a speech at Winnipeg University (you can watch my speech: “NATO, Canada and Western Imperialism”here).

Are Canada and its peace movements in Regina and Winnipeg, those proverbial mice which roared?

I am not sure, but what I encountered there filled me with optimism and hope, even convincing me that not ‘everything in the West is lost, yet’.

It also made me think: one assumes that the centers of resistance are located in such metropolises as New York, Los Angeles and Toronto. But, in reality, the Canadian opposition often gathers in small cities and towns: Radio Pacifica deep in British Columbia, Christopher Black well outside Toronto, and Ed Lehman in Regina.

RPC has already hosted such outstanding Canadian individuals as Michel Chossudovsky, a great thinker and the publisher of Global Research, Eva Bartlett, one of the bravest war correspondents on earth, and soon, Christopher Black, my friend, a Communist international lawyer, an author and a poet. It also hosted me, a revolutionary writer and, or as they call me in Latin America, a militant internationalist. And the people of Regina were not scared by what I had to say; they treated me with kindness and warmth, which I shall never forget.

I felt much more at home in Regina than I ever felt in Toronto or Montreal.

During a demonstration against NATO, in Regina; right in the middle of the city, two police officers, one man and one woman, were watching us from the distance. They did not try to interfere. Sometimes they smiled, but mostly they just listened.

When demonstrators formed a circle, two law enforcement officers were invited to join, to participate. Without one moment of hesitation, they did join. That is when I thought: “No, this is nothing like the United States. This is Canada”.

And I was certain that soon, I will be back.