How should congestion pricing work in the future? It may be based on “square-foot-second of road capacity” that accounts for the width of the vehicle, the size of the buffer zone around it, and the time you occupy that space. 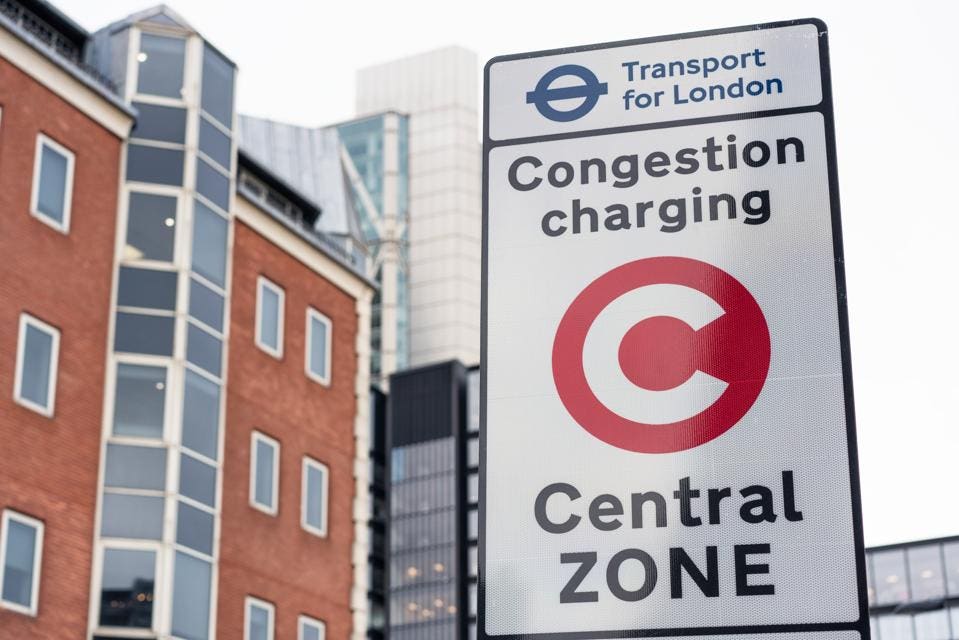 London, UK – A sign warning drivers that they are about to enter the central zone, in London’s city centre, where there is a daily charge for car use, to prevent traffic congestion.

In 1975, Singapore was the first city in the world to try “congestion charging” — a toll for driving into the central business district meant to reduce traffic there. Since then, the idea has been very slow to catch on, spreading to only a few cities. In the United States, it’s generally been turned down as too much of a political problem. Everybody’s taxes pay for the roads, so charging for them smacks of saying that everybody’s roads are only for the rich.

This is changing, as New York is going to institute a congestion charge below 60th St. in Manhattan. This is controversial, as expected, and fees don’t start until 2021. They may be around $12 for cars and $25 for trucks, so not minor. The plan is to use the $1 billion generated each year to pay for public transit.

New York’s charging, like London’s, is very imprecise. It’s a daily fee. It charges the same no longer how long you spend in the zone. The idea is almost 45 years old, and so it’s strange that NYC isn’t considering something much better and more modern. Singapore began with paper tickets you put on the windshield, and moved to electronic tolling over 20 years ago. We now live in the era of the smartphone. By 2021, it’s entirely reasonable to require that every car entering downtown Manhattan have a smartphone in it.

This means that much more is possible today than was imagined 45 years ago.

Congestion charging has had mixed reactions around the world, but not always as expected. In Sweden, support for it was 40% before it started, and rose to 68% later. For example, it was feared that downtown retailers would hate it — it’s effectively a tax on people driving to shop at their store — but by clearing the roads, it made the shopping more pleasant and worth the fee. It also changed the debate on what else might be priced on the roads, like free street parking. The people who paid the most voted for it by a small majority, but then they obviously thought it was worth it.

Congestion charging should be a big boon for true “ride sharing” — namely carpooling, Uberpool, LyftLine, vanpools and plain old transit. When you count the number of empty seats passing you on the road at any time, it’s obvious that our roads have a great deal of extra capacity that’s not exploited. Pooling people together is hard, because we won’t tolerate too much inconvenience, and you need a critical mass of riders before you can make pooling happen with minimal inconvenience. After all, private car travel already costs a great deal more than transit, but it is the overwhelming choice (92% of miles in the USA and 82% in Europe) for travel due to its combination of convenience and comfort. Congestion charging not only discourages taking a private car; if it discourages enough people, it makes sharing much more likely to be convenient.

Transportation of the future should offer a very wide variety of vehicle sizes, from small single person “pods” to vans, and in some cases, even buses and trains. The key is making the vehicles match the trip and the number of riders, not making the riders match the vehicle. I have outlined how, thanks to robocars, we can have extremely convenient and efficient shared transportation in The future of transit.

To really make that work, congestion charging could become extremely precise. People could be charged literally for every square-foot-second of road capacity and parking they use. Your “footprint” is not just the size of your car. More properly it’s the width of your car times the size of the buffer zone it needs around it, times the amount of time you occupy that footprint. The faster you go, the more buffer you need, but the less time you take. The same can be true of parking, particularly when robots are doing the parking and can park themselves “valet” dense (or even more densely since nobody has to get in or out of the car.)

Unfortunately, when it comes to the road, recording this level of information would require highly Orwellian tracking. It’s never a good idea to ask something people own (like a phone or car) to be responsible for enforcing charges on them. It means locking down the device they supposedly own, and/or having people break those locks.

An alternate choice is to give or sell “reservations” that offer the right to occupy a certain volume of road and certain (approximate) times. Once your route is planned, you can get a reservation to be on each segment of road over a certain range of times, such that you’ll still match-up even with the usual delays and speed gains. What matters is that the city doesn’t allocate more reservations on the road than it can handle. As long as we don’t put more cars on a road than it can handle, we rarely get congestion at all — and it turns out everybody wins, even the people who didn’t get slots at the times they wanted. Some models suggest this can be done simply by allocating routes and telling people what time to leave. As long as they stick to the plan, or notify the system when they can’t, you get a good approximation of what you get from precise reservations. Because you only have to talk to the system when things go awry, the Orwellian specter of being constantly watched is reduced.

I discuss how this might eliminate congestion altogether — something far beyond what congestion charging hopes to do — in my essay entitled, What if the city ran Waze and you had to obey it?.

Sweden’s lesson suggests that drivers might even give up the American ideal of god-given free parking. Free parking isn’t just a subsidy for automotive travel, it results in very bad allocation of parking when it’s scarce. It is much better for you, the parker, to get “cheap but never free” parking instead of free parking. Yes, you pay, but you make it back in time saved hunting for parking or dealing with the congestion that causes.