The most remarkable program strides have been made in access to interconnection information held by the utility, Xcel Energy. Over the last three years, three game-changing tools have been developed that did not exist on day one of the program. Access to this information has aided the garden-siting process and improved the accuracy of the application queue. These tools have significantly reduced development costs and utility engineering spend.

Fresh Energy looks at the key metrics and behind-the-scenes developments that made Minnesota’s solar garden program a success in 2017.

It’s been a big year for Xcel Energy’s community solar program in Minnesota, with approximately 200 megawatts of projects crossing the finish line.

The program officially launched in 2014 has come a long way in just three years. In year one, community solar had a rocky start when a flood of applications and investment capital meant developers, regulators and the utility had to take their first steps under a tremendous amount of pressure. Year two moved at a crawl as many critical steps were debated, escalated, and then established. Now, as community solar turns three, solar gardens are blooming around the state and the program seems to have found its rhythm.

The program is beginning to offer the predictability and transparency that comes from maturation, experience, and hard work from all stakeholders.

A look at the numbers

Minnesota’s total installed solar capacity has more than doubled in 2017, according to preliminary figures compiled by the Minnesota Department of Commerce. This growth comes mostly from Xcel Energy’s community solar program, which reports a total of 58 operational gardens, totaling 211 megawatts, in Xcel’s December compliance filing to the Public Utilities Commission. That is a lot of solar and a huge accomplishment.

First, the chart below summarizes application status, in megawatts, over the last year progressing from Early Application Stage (green), through Engineering Study Stage (gray), into the Design and Construction Stage (yellow) and finally to a complete application and in-service projects (blue). The sliver of completed projects in December 2016 represents a discouraging 0.4 megawatts of completed projects at this time last year, compared to the 211 megawatts in operation today. Also, the lower volume of projects in the engineering stage is an indication that applications are being studied and interconnection costs are being provided more quickly than in the past, which shows improved efficiency on the part of Xcel’s engineering team. 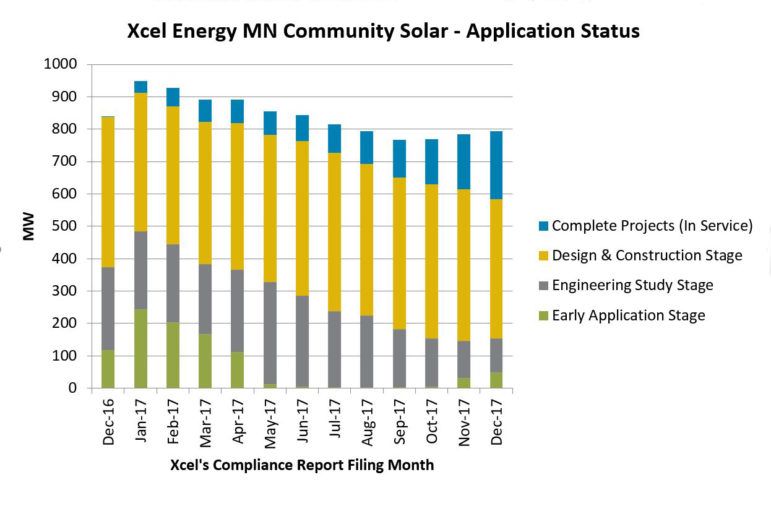 Second, there are far fewer applications being withdrawn. It is worth noting that an application to the program must be accompanied by a $100 per kilowatt deposit, so there was real “skin in the game” from the start. As an example, a developer wanting to apply to interconnect a 1-megawatt garden must transfer $100,000 in refundable deposit funds to Xcel to even begin the process of entering the queue. In the first two years of the community solar program, a massive 1,296 megawatts of applications were submitted and then withdrawn — compared to only 202 megawatts withdrawn in the third year.

The change is partly due to the 5-megawatt co-location limit enforced retroactively in the first year and new applications being limited to 1 megawatt since. It can also be credited to a collective cry for improved grid transparency being heard by the commission and Xcel, providing developers a much better understanding of interconnection feasibility in advance of submitting an application (more on that in the following section).

Third, the program is shrinking. As you can see from the chart below, new projects are entering the queue at a lower rate than projects being completed, and we expect this trend may continue. The low volume of new applications is likely due, in part, to the industry adjusting to the value-of-solar determination, which went into effect in January 2017. It could also be that developers are waiting to see the outcome of the Public Utilities Commission decision regarding a value-of-solar adder for residential customers, a discussion that is still underway.

It may also be that the most sought-after siting locations in and around the metropolitan area have been exhausted and new development will require a more creative approach. Unfortunately, with the uncertainty around module tariffs and tax disadvantages for the industry at the federal level, we expect that new application volume will continue to be low in the coming year as well. 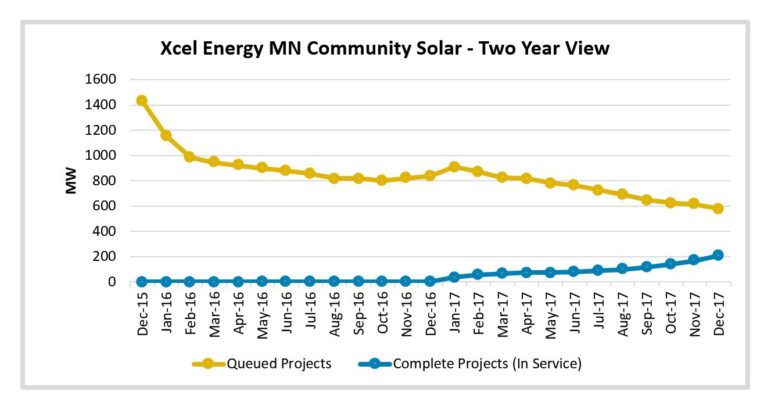 The most remarkable program strides have been made in access to interconnection information held by the utility. Over the last three years, three game-changing tools have been developed that did not exist on day one of the program. Access to this information has aided the garden-siting process and improved the accuracy of the application queue. These tools have significantly reduced development costs and utility engineering spend.

To this point, a fairly standard practice for the land on solar sites has been gravel and/or monocrop lawn grass. That changed in 2016 when Fresh Energy, Audubon Minnesota, Minnesota Corn Growers Association, and Minnesota Farmers Union worked with agricultural and business leaders to establish the nation’s first statewide standard for vegetation on solar sites. That has led to an incredible improvement in solar site design. Developers have shifted away from gravel and lawn grass toward native prairie grasses and wild flowers that create habitats for pollinators, improve water quality for the site and surrounding land, and make solar projects much more aesthetically pleasing for the community.

While early interest in community solar tended to come from large customers who could serve as “anchor tenants” and who could subscribe to the maximum 40 percent of a given project, new progress has been made in expanding access to community solar to people of all incomes. One pilot project being proposed would pair energy-efficiency improvements with community solar subscriptions in the Railroad Island neighborhood of Saint Paul. As the Minnesota Public Utilities Commission reviews the proposal, Fresh Energy is pushing for this model to be expanded to serve neighborhoods across Xcel’s service territory, and continues to work to remove regulatory barriers for third-party solar developers to serve Minnesotans of all income levels.

The community solar program has been transformative to the Minnesota energy market and conversation. The value of the program goes well beyond the subscriber bill credits and garden property taxes. The ”baptism by fire” experience of this program for Xcel, the regulators, the industry, and stakeholders has become the starting point for a reconsideration and major overhaul of the Minnesota state interconnection standards. It has brought about city and county solar ordinances and permitting advancements reducing soft costs. It has encouraged customers to think about their energy mix and ask for better options from their utilities.

Giving customers the option of subscribing to clean, local energy has been incredibly popular — not just with families and businesses, but also with schools, cities, counties, churches and nonprofits that have difficulty taking advantage of federal tax credits and other financing models. This customer-driven growth in community solar for Xcel Energy customers parallels Xcel’s nation-leading plan for an 85 percent carbon-free — and 60 percent renewable — energy mix by 2030.

Looking ahead to year four of Xcel Energy’s community solar program, we anticipate a big winter and spring of construction for the final co-located gardens before rules are tweaked next year.

Laura Hannah is a senior policy associate on the energy markets team at Fresh Energy, an independent nonprofit organization working to speed the transition to a clean energy economy. This piece was originally published on the Fresh Energy website and is reprinted with permission.