There are a slew of bus route changes up for debate in DC right now. Where Metrorail’s troubles lie in complicated funding, safety, and logistical challenges, the buses’ are about network design–which happily, is relatively easy to change. Here are four achievable ways to make our local buses better.

The good news is that the United States and Canada are replete with examples of good bus network redesigns. These redesigns are not game-changers the way the construction of Metrorail was, but they can accommodate more ridership with the same resources. In Seattle, the opening of a light rail extension last year led to a bus network redesign in the affected area, in which buses were reconfigured to serve the new stations. In Houston, a from-scratch redesign seems to have resulted in steady ridership in 2016, avoiding the declines seen by most other American bus agencies.

DC can join the ranks of cities that have strengthened their bus systems to more effectively and efficiently serve their residents by following industry best practices, such as making schedules easier for passengers to follow and changing how routes run through downtown, among other changes.

There is a set of guidelines for how to run the best possible urban bus network. Some are general principles, applicable in nearly all developed-world cities, regardless of local details. They often involve cooperation between different agencies. For changes involving Metrorail, Metrobus, and other parts of the metro system, even straightforward changes might be difficult to implement; WMATA’s multi-jurisdictional nature means that regional leaders, both within the District and in Maryland and Virginia, need to work together on better system-wide integration. Other changes may only require the cooperation of DDOT and other agencies within the DC government.

1. Schedules should be frequent, and easily usable by riders.

Not every bus has to have high frequency, but there should be a useful network of lines with high frequency all day, working alongside Metro. When possible, schedules should run on a clockface pattern. A good example comes from the 52-54 buses running on 14th Street: in the midday off-peak period, each of the three buses comes every 20 minutes, in a precisely repeating schedule. Southbound, the 52 leaves Colorado Street and 14th at :16, :36, and :56 (that is, 16, 36, and 56 minutes past the hour); the 53 does at :09, :29, and :49; and the 54 does at :04, :24, and :44. This repeats for several hours, and passengers can memorize these patterns relatively easily.

But this pattern breaks down at rush hour, even though WMATA can run twice as much service at the half points (e.g., at :06, :26, and :46) on the 52. A predictable schedule is also absent from other workhorse bus routes in DC, such as the S2 and S4 on 16th, which instead come in 16-minute intervals in off-peak times.

Running public transit with branches is a double-edged sword. On the one hand, it covers more area, and gives passengers a greater variety of one-seat rides—that is, trips that they can take without transferring to another bus or train.

For example, riders in Alexandria benefit from being able to choose between the Yellow and Blue Lines. On the other hand, it limits the frequency of service: neither the Blue nor the Yellow Line runs very frequently outside rush hour. Branching also makes trains less reliable (compare London’s highly branched Northern line with the non-branching Jubilee and Victoria lines), which reduces capacity in turn. 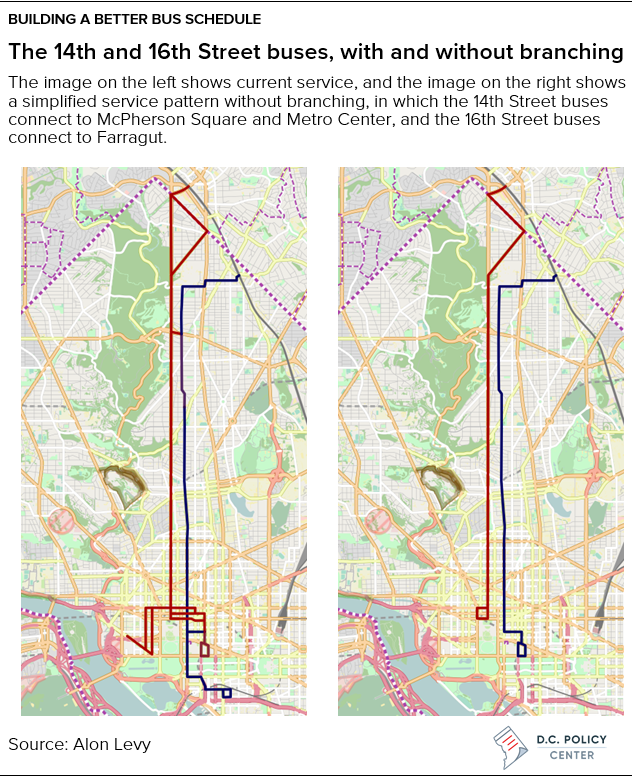 Image by the author.

The buses in DC have extensive branching. The reverse branching on the 14th and 16th buses (the S-series and the 50-series) is especially frustrating. Those two streets have simple bus service, except at the downtown end, where three different branches serve different downtown destinations. The top destination for riders in DC is the central business district, from Farragut to Metro Center, and for other destinations passengers could connect to Metro. The 50-series could run every 6 minutes and the S-series every 7.5 minutes.

A bus that comes as frequently as every six minutes does not need to run on a timetable—achieving the required precision is hard on surface streets, and it is better to dispatch buses to run about six minutes behind the previous bus to even out bus load. And, with buses running so frequently, riders don’t need to memorize a specific schedule. But because the 50- and S-series buses are highly-branched, they have to run on a fixed schedule, since every individual branch only runs every 16 or 20 minutes; to achieve the same level of reliability, the timetables need to include padding, which further contributes to longer wait times.

Pruning branches may look like a service cut on the map, but I would argue that the positive effects on frequency and reliability make it a service improvement overall, and may ultimately attract more riders over time.

3. Give the buses clearer route numbers

Good bus service is not just about technical decisions but also clarity in communicating the system to the passenger. All modern bus systems have inherited complex routes, legacy of when they were first established in the early 20th century. Over the decades, they have expanded haphazardly based on local changes, such as new development, or traffic changes that converted two-way streets to one-way. The resulting layout sometimes works and sometimes does not.

The bus grids of such cities as Los Angeles and Portland are recent creations, replacing old downtown-centric maps, inherited from an era where employment was more downtown-centric than today. These grids offer good connections between buses but also improve clarity: it is easier for passengers to know where the bus goes if it follows a familiar arterial road.

A more concrete example of how bus networks are typically kludges is route numbers. DC’s bus route numbers are a legacy of the 1930s, when the numbered routes were streetcars and the lettered routes were buses. Today, when all of these routes are buses, this naming system is no longer relevant and only introduces more complexity into the system. The S-series and 50-series routes are especially confusing, since the number 5 and the letter S look similar, and those buses run closely parallel to each other.

In some gridded cities with numbered streets, buses are numbered after the streets they run on. Thus, in Manhattan, the crosstown bus routes carry the number of the street they follow, such as 14th, 34th, or 42nd Street. Regardless of whether WMATA chooses to straighten the bus routes, it could streamline the bus nomenclature, to avoid the confusing coming from the lettered and numbered buses in the District; the new system should have a single route running down 14th, numbered 14, and another single route running down 16th, numbered 16.

Off-board fare collection, in which passengers generally purchase their tickets before they get on the bus, is one way of increasing bus speed. In German cities, for example, buses have off-board fare collection, with random fare inspections. Passengers who have valid monthly passes or transfers can board from any door; passengers who need to buy a ticket can board from the front and pay, but in practice those are a minority. This speeds up buses, since passengers can board more quickly.

In the United States, San Francisco Muni is to date the only American agency to have implemented this systemwide, gaining two percent speed with a two percent rise in passenger numbers, where normally rising passenger usage would lead to lower bus speed because of longer total boarding time. New York has implemented off-board fare collection on a few specially branded routes, with 10-15 percent speed gains.

Another way to improve bus speed and reliability is for DDOT to create dedicated bus lanes and signal priority for buses, based on the principle that a bus with forty passengers should get forty times as much priority as a car with one driver and no passengers:

This piece outlines four ways WMATA and DDOT can modernize DC’s bus operations according to best industry practices. Some choices may be more politically difficult, such as giving buses priority on streets over car traffic. But combined with other changes such as off-board fare collection, this would give the District faster and more reliable bus service.

There are also many opportunities for less controversial planning improvements, such as reconfiguring buses to allow more frequent service. This means pruning some branches in order to simplify service, making sure that passengers can easily understand where each bus goes without needing to use an app. The unbranched trunk routes can then run at a frequency that is high enough not to need a set schedule, such as on the 14th and 16th Street buses, or on a clockface schedule, such as every 15 or 30 minutes. It also means adding crosstown service and connecting to Metrorail stations better.

While these treatments are not groundbreaking or revolutionary, they have the potential to increase DC’s bus ridership after years of declining passenger use. Half-measures that focus on just one aspect, such as bus network design, have arrested the decline in bus ridership elsewhere in the United States, but have not led to any transit revival yet; bus ridership on the whole remains well below where it was just a few years ago. But full modernization and reform is likely to make buses fast and punctual enough to win large numbers of riders back, even those who can afford to buy a car or rely on private transportation options.

This article is a part of an ongoing series of studies from the DC Policy Center.