Have you ever thought of this possibility? You have too much shade on your roof for solar panels, but your neighbors have plenty of sun, producing more than they need.  Why not buy electricity from their solar arrays instead of from the grid?

A new microgrid network in Brooklyn, New York is doing exactly that, developing a peer-to-peer solar network where neighbors can buy and sell solar and wind energy.

This is the first step toward transforming how energy is bought and sold.

The Brooklyn Microgrid runs on Ethereum, a technology created for secure Bitcoin transactions. It monitors energy flows through the system and allows residents to buy and sell energy on the peer-to-peer network.

“It’s pretty hands off – as we think that will suit consumers best – but in the future we plan to enable people to set preferences to maximise savings, do good in the community, and sell energy cheaper to low?income areas.”

Developing a network like this is complicated right now. It requires contracts, financing, network designs, for example, but that will work itself out over time.

Another company, Yeloha, is setting up peer-to-peer solar in Boston. 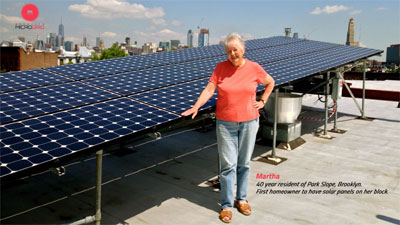 Microgrids – small, community-based energy systems that are independent from the grid – are taking off by the thousands across the US, and NY State in particular, supports a transition to distributed energy.

“Communities are taking an important first step toward securing their energy future. By ensuring a continuous energy supply, medical facilities and communities can more reliably provide critical services and be better protected in the event that disaster strikes. I encourage communities across the state to participate in the NY Prize program to make their energy systems stronger and more resilient,” says Governor Cuomo.

Microgrids hook up to the central utility grid, but don’t rely on it and can be disconnected during a storm – protecting members from power outages.

During Superstorm Sandy, residents with solar systems were distraught when they couldn’t get electricity during the storm. That’s because they were hooked to the grid and for safety purposes, the connection had to be turned off to protect people from being electrocuted when working on transmission lines.

A microgrid takes care of that problem because it continues to run even when the grid connection is turned off.

Another benefit of microgrids is that energy isn’t lost as it travels long distances through transmission lines. About 6% of the electricity generated from central power plants is lost, according to the US Energy Information Adminstration.

“This whole concept benefits the area you live in. By buying energy locally, rather than from a national entity, the money goes back into the pockets of people in the community,” explains Joseph Lubin, co-founder of Transactive Grid.

“For so long, we have been beholden to the big energy companies and the take?up of renewable energy has been held back by traditional business models. We want to give people another option.”

Connecticut is building a state-wide microgrid and New Jersey has the first microgrid for a transit system. California is spending $26.5 million in grants for microgrid projects, and the military is very active on microgrids, even experimenting with tethering them together.

Read our article, Consortium Forms to Accelerate Microgrids in US.