The first science-based diet that tackles both the poor food eaten by billions of people and averts global environmental catastrophe has been devised. It requires huge cuts in red meat-eating in western countries and radical changes across the world.

The “planetary health diet” was created by an international commission seeking to draw up guidelines that provide nutritious food to the world’s fast-growing population. At the same time, the diet addresses the major role of farming – especially livestock – in driving climate change, the destruction of wildlife and the pollution of rivers and oceans.

Globally, the diet requires red meat and sugar consumption to be cut by half, while vegetables, fruit, pulses and nuts must double. But in specific places the changes are stark. North Americans need to eat 84% less red meat but six times more beans and lentils. For Europeans, eating 77% less red meat and 15 times more nuts and seeds meets the guidelines.

The diet is a “win-win”, according to the scientists, as it would save at least 11 million people a year from deaths caused by unhealthy food, while preventing the collapse of the natural world that humanity depends upon. With 10 billion people expected to live on Earth by 2050, a continuation of today’s unsustainable diets would inevitably mean even greater health problems and severe global warming.

Unhealthy diets are the leading cause of ill health worldwide, with 800 million people currently hungry, 2 billion malnourished and further 2 billion people overweight or obese. The world’s science academies recently concluded that the food system is broken. Industrial agriculture is also devastating the environment, as forests are razed and billions of cattle emit climate-warming methane.

“The world’s diets must change dramatically,” said Walter Willett at Harvard University and one of the leaders of the commission convened by the Lancet medical journal and the Eat Forum NGO. The report, published in the Lancet and being launched to policymakers in 40 cities around the world, also concluded that food waste must be halved to 15%.

“Humanity now poses a threat to the stability of the planet,” said Prof Johan Rockström at the Stockholm Resilience Centre, Sweden, another author of the report. “[This requires] nothing less than a new global agricultural revolution.” Farm yields in poorer nations must be improved to create a sustainable, healthy world, the report found.

The planetary health diet is largely plant-based and allows an average of 2,500 calories a day. It allows one beef burger and two servings of fish a week, but most protein comes from pulses and nuts. A glass of milk a day, or some cheese or butter, fits within the guidelines, as does an egg or two a week. Half of each plate of food under the diet is vegetables and fruit, and a third is wholegrain cereals.

Willett said these provide the ingredients for a flexible and varied diet: “We are not talking about a deprivation diet here; we are talking about a way of eating that can be healthy, flavourful and enjoyable.

“The numbers for red meat sound small to a lot of people in the UK or US,” he said. “But they don’t sound small to the very large part of the world’s population that already consumes about that much or even less. It is very much in line with traditional diets.”

The planetary health diet resembles those already known to be healthy, such as the Mediterranean or Okinawa diets, the researchers said.

“The planetary health diet is based on really hard epidemiological evidence, where researchers followed large cohorts of people for decades,” said Marco Springmann at Oxford University and part of the commission. “It so happens that if you put all that evidence together you get a diet that looks similar to some of the healthiest diets that exist in the real world.”

The report acknowledges the radical change it advocates and the difficulty of achieving it: “Humanity has never aimed to change the global food system on the scale envisioned. Achieving this goal will require rapid adoption of numerous changes and unprecedented global collaboration and commitment: nothing less than a Great Food Transformation.”

But it notes that major global changes have occurred before, such as the Green Revolution that hugely increased food supplies in the 1960s. Moves to tax red meat, prevent the expansion of farmland and protect swathes of ocean must all be considered, the commission said.

Prof Guy Poppy, from the UK’s University of Southampton, and not part of the commission, said: “This ‘call to arms’ with its clear solutions is timely, comprehensively researched and deserves immediate attention.”

“This analysis is the most advanced ever conducted,” said Prof Alan Dangour, at the London School of Hygiene and Tropical Medicine, and also not part of the team. “But there is a major question about the ability of populations to shift to such dietary recommendations and their wider public acceptability.”

Prof Nigel Scollan, at Queen’s University Belfast and part of the industry-backed Meat Advisory Panel, said: “This report tells us what we have known for millennia: an omnivorous diet is optimal. In the UK, encouraging people to eat less red meat and dairy will have little impact on the environment and is potentially damaging to people’s health.”

But Richard Horton and Tamara Lucas, editors at the Lancet, said in an editorial that global changes as set out by the planetary health diet were essential: “Civilisation is in crisis. We can no longer feed our population a healthy diet while balancing planetary resources. If we can eat in a way that works for our planet as well as our bodies, the natural balance will be restored.”

She will say on Friday that a meat tax in the UK could be offset for more sustainable meat producers, such as organic livestock farmers, through more money for sustainable agriculture schemes.

Lucas will tell the Oxford Farming Conference, an annual gathering of farmers from across the UK, that the country must prioritise “more humane and human-scale methods of livestock farming, together with support for farmers to transition to less livestock”.

“If the world’s diet doesn’t change, we simply can’t avoid the worst effects of climate change,” Lucas will say, in a stark warning timed to coincide with the push for people to adopt a vegan diet for a month, the “Veganuary” movement.

In a call likely to be controversial, she will say: “Better manure management and careful selection of feed can both help reduce greenhouse gas emissions, but – at the risk of incurring the wrath of the energy secretary, who said recently that encouraging people to eat less meat would be the worst sort of nanny state ever – we need serious consideration of measures like a meat tax.”

She said that it would take “more than motivated consumers to bring about sustainability” in agriculture. Globally, livestock rearing is estimated to be responsible for about 15% of greenhouse gas emissions.

Lucas has tabled a parliamentary motion to require farming to be net zero in emissions as quickly as possible, which would involve ways to reduce fertiliser use and increase the amount of organic matter in the nation’s soils, both issues that Michael Gove, the environment secretary, also espouses.

She said: “We need to bring the whole food chain into the circle of responsibility, not leaving farmers to work on their own, together with clear signals that society will play its part in funding this transition through a new agriculture policy.”

But the notion of Veganuary has come under attack from some at the conference, with the National Sheep Association (NSA) claiming the movement, which encourages people to give up animal products for the month and consider permanent changes to their diet for health and environmental reasons, was part of a “campaign against livestock farming”.

Phil Stocker, chief executive of the NSA, defended British sheep farming as working to improve the environment rather than causing damage to it. “Our concern is that our unique, grass-based method of sheep production in Britain is hidden within more global and general statistics,” he said.

He contrasted the UK’s sheep farming, which includes many upland areas unsuitable for other forms of agriculture and is one of the least intensive forms of livestock farming, with the megafarms and feedlots that characterise beef, pork and poultry production in many parts of the world, chiefly the US but increasingly being brought to the UK.

“We are seeing criticisms from welfare campaigners, rewilders, climate change campaigners and health campaigners – but all these are connected and ignore the fact that UK sheep farming works very much in harmony with our environment, our landscapes and our human ecology, creating a countryside the majority of the public love and producing a food product that is healthy and nutritious within a balanced diet,” he said.

Stocker said he opposed a meat tax: “The right meat, consumed sensibly, should be incentivised and not taxed. Sheep production is not damaging to the environment or to health – sheep mainly eat grass and grass is part of a complex and natural cycling of carbon, with soil storing carbon in organic matter.

“Any meat tax would be likely to affect all meat production and consumption – and there are many different forms of meat production. A meat tax would end up putting further pressure on primary producers – in the case of sheep this would impact on the profitability of many small family farms, yet these are highly desirable and deliver a host of economic, social and environmental goods.” 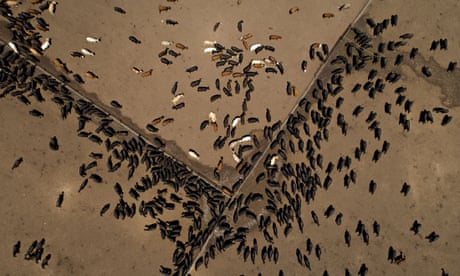 Earlier Gove told the conference that advances in synthetic biology meant that in the future we would be able to create traditional farming products such as meat, milk or eggs in laboratories, adding that “the potential for Britain to lead in this revolution is huge”.

But asked whether the UK should be looking into increasing its production of “fake meat”, the National Farmers Union president, Minette Batters, said: “When you have one of the very few areas in the world where you have the right climate for producing food, that surely is what you should be doing.”

She added that “95% of what we eat is produced in soil, it’s nutrient dense and that is why it is such a valuable food. Why would you want to be stepping back from that?”