“Dewey’s God, his symbol of what he called ‘the union of the ideal and the actual,’” Rorty writes, “was the United States of America treated as the symbol of openness to the possibility of as yet undreamt of, ever more diverse forms of human happiness.” He saw “much of what Dewey wrote” as “endless reiterations” of a passage from Walt Whitman’s “Democratic Vistas.” In prescribing an ethos of democratic openness, Rorty concedes that he’s effectively forcing a hostile curriculum down the throats of fundamentalist or bigoted fellow citizens, but so be it. 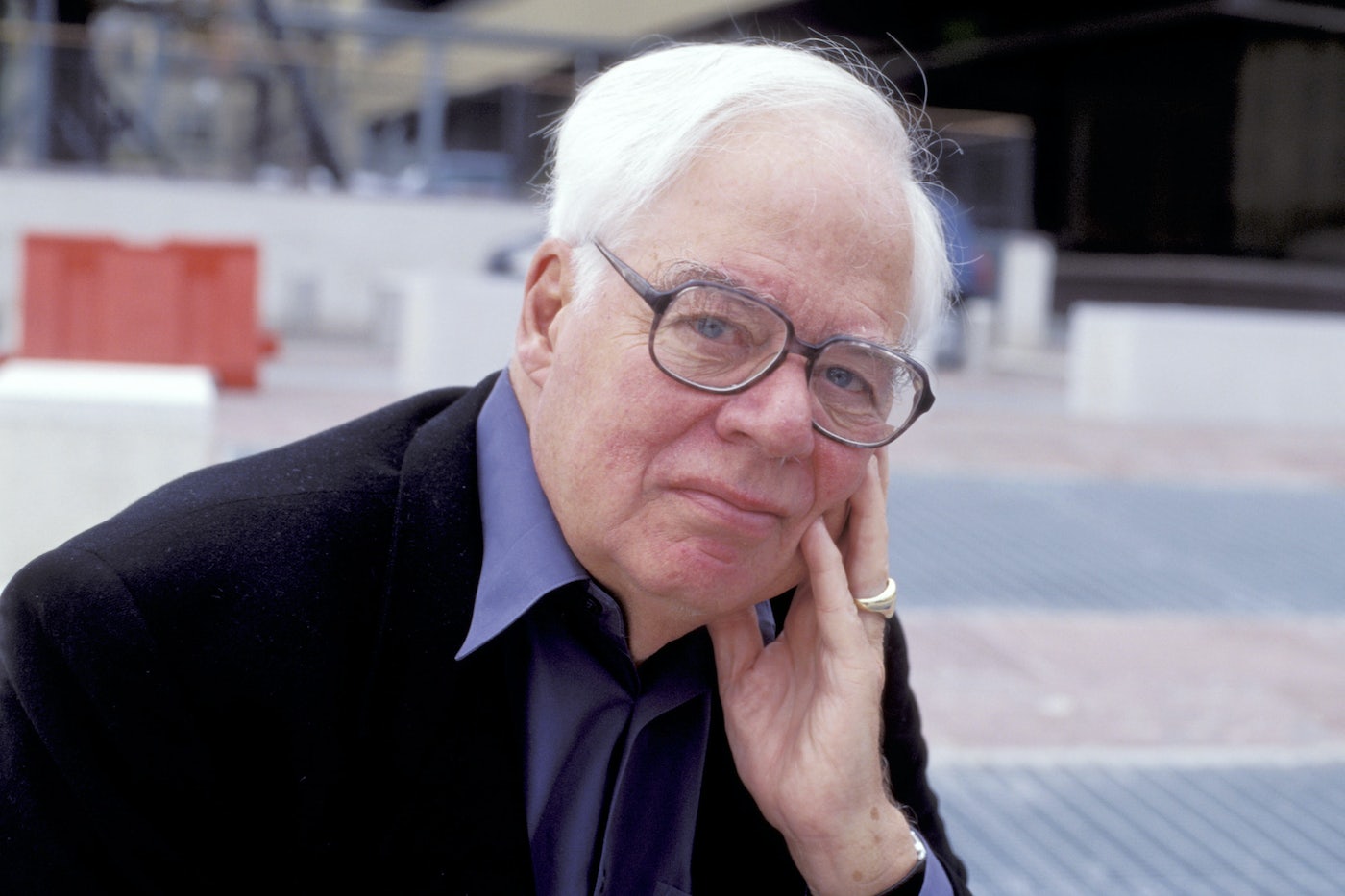 Of all the recently departed thinkers who might have helped us puzzle through the dismal political, intellectual, and socioeconomic prospects of the Trump era, perhaps none looms as large as Richard Rorty. Shortly after the 2016 election, the great pragmatist philosopher, who died in 2007, won fresh viral renown thanks to a widely quoted passage from his 1998 book Achieving Our Country, which appeared to prophesy the conditions of Donald Trump’s shocking ascension to the presidency.

Working-class Americans, he wrote, “will sooner or later realize that their government is not even trying to prevent wages from sinking or jobs from being exported.” Nor will suburban white-collar workers, struggling against their own brand of office-park precarity, “let themselves be taxed to provide social benefits for somebody else.” So in short order, Rorty argued, “something will crack. The nonsuburban electorate will decide that the system has failed them and start looking for a strongman to vote for—someone willing to assure them that, once he is elected, the smug bureaucrats, tricky lawyers, overpaid bond salesmen, and postmodern professors will no longer be calling the shots.”

Never mind that Trump actually won a majority of the white suburban electorate’s support as well; the general outlines of Rorty’s forecast helped explain the pseudopopulist, protectionist, and white nationalist takeover of the Republican Party—a realignment that has outlasted Trump’s term in office.

The broader philosophical sweep of Rorty’s brief for a reformist left politics has been less viral, in part because his academic writings could be forbiddingly dense and technical—even though his prose was refreshingly direct and clear, at least compared with the other “postmodern professors” he was calling out. More than that, though, Rorty’s philosophical commitments—steeped in the “antifoundationalist” theorizing of John Dewey—didn’t always seem the easiest fit with the politics he professed. In a characteristically playful turn of phrase that didn’t illuminate all that much, Rorty proclaimed his allegiance to “postmodern bourgeois liberalism,” while also castigating the identitarian agendas of “the cultural left”—another prophesy, in its own way, of the post-Trump invocations of the sundered New Deal coalition by Mark Lilla and others. It had never been all that clear, on Rorty’s own pragmatist model of unsentimental and unmetaphysical utility, why the beleaguered traditions of liberalism—postmodern, bourgeois, or otherwise—spoke powerfully to the demands of the age.

In Pragmatism as Anti-Authoritarianism—an edited transcript of 10 lectures Rorty delivered at the University of Girona in 1996, most of which are appearing now in English for the first time—we have perhaps the clearest account of how he understood pragmatist thinking as a political undertaking. In the book’s preface, he proposes that instead of deriving meaning from absolute conceptions of authority that come from either God or a modern surrogate for the divine, “we build our philosophical reflections around our political hopes: around the project of fashioning institutions and customs which will make human life, finite and mortal life, more beautiful.”

Rorty proposes that “we build our philosophical reflections around our political hopes: around the project of fashioning institutions and customs which will make human life, finite and mortal life, more beautiful.”

In the ensuing essays, Rorty follows this disarmingly modest-sounding directive into a wide range of subject areas, from religious faith to the ideas of John Rawls and Jurgen Habermas. As he goes, Rorty cheerfully discards familiar guideposts of spiritual observance and moral duty painstakingly worked out by Aristotle, Plato, Kant, and their many successors in analytical and moral philosophy, on the grounds that they are simply irrelevant to most pragmatist schemes of meaning. In their place he erects the overlapping gospels of Deweyan liberalism and Whitmanian democratic enthusiasm. “Dewey’s God, his symbol of what he called ‘the union of the ideal and the actual,’” Rorty writes, “was the United States of America treated as the symbol of openness to the possibility of as yet undreamt of, ever more diverse forms of human happiness.” He saw “much of what Dewey wrote” as “endless reiterations” of a passage from Walt Whitman’s “Democratic Vistas,” in which Whitman says:

America … counts, as I reckon, for her justification and success (for who, as yet, dare claim success?) almost entirely on the future…. For our New World I consider far less important for what it has done, or what it is, than for results to come.

It’s the provisional, future-centric vision of this American creed that, in Rorty’s view, rescues it from the sort of nationalist special pleading that, say, dogged Hegel’s theory of the German state—or Hegel’s many far-less-attractive twentieth-century German-nationalist disciples. After all, in prescribing an ethos of democratic openness, Rorty concedes that he’s effectively forcing a hostile curriculum down the throats of fundamentalist or bigoted fellow citizens, but so be it:

I don’t see anything Herrschafts-frei [i.e., domination-free, following Habermas’s usage] about my handling of my fundamentalist students. I think those students are lucky to find themselves under the Herrschaft of people like me, and to have escaped that of their rather frightening and dangerous parents. But I think the handling of such students is a problem for … Habermas. It seems to me that I am just as provisional and contextualist as the Nazi teachers who made their students read Der Stürmer; the only difference is that I serve a better cause. I come from a better province.

These casual-sounding rejoinders are grounded in what Rorty terms a “pan-relationist” model of inquiry—one that denies notions of transcendent reason, intrinsic meaning, and universal truth and that largely confines philosophical inquiry to language. With no arbiter of ultimate meaning beyond the relations of individual sentences to one another, most thought and activity narrows to contextualized language games. And in this scheme, social criticism is actually the most valuable form of philosophizing. The great failing of essentialist or transcendence-minded philosophy, Rorty argues, is that its apostles “divert the optimism of the moderns. They divert it from its proper concern—utopian politics—to the possibility of escaping from politics by moving out of practice into theory.

There’s much that’s appealing in such claims—particularly for people like me, who by virtue of studying history are accustomed to contextualizing all higher intellectual yearning along a human-scale grid of fallible, culture-bound endeavor (and who have more than a passing weakness for social criticism for its own sake). Still, Rorty’s engaging and good-natured wrecking-crew tour of Western thought raises at least as many nettlesome questions as it professes to settle.

For one thing, by this reasoning, pragmatist claims are just as easy to set aside as other, more grandiose schemes of meaning. Donald Trump is hardly a master of robust or intuitive sentence flow, and yet he clearly does serve as a powerful repository of meaning for an entire political movement. Where exactly do those loyalties come from? Misplaced or curdled religious faith? An instrumental will to power? Even if an ultimate explanation would place us well beyond the coordinates of utility-minded language games, it would be no small thing for our democratic future for us to know—and guard vigilantly against it. (One might also note here that the pragmatist rejection of authority as overdramatized and antidemocratic cuts in multiple political directions, not all of which align with Rorty’s own preferred politics: Anti-vaxxers who reject the Covid-19 vaccines and Trump supporters who refuse to recognize the outcome of the 2020 presidential election are also dispensing with truth claims on their own self-generated models of moral order, with rather dire implications for the advancement of the common democratic good.)

One might further note that Rorty’s intensely secularist worldview raises pragmatic political questions of its own. Ceding the field of spiritual intuition and explicit God talk to the decidedly undemocratic and nonutopian political opposition seems like it could be an enormous tactical miscalculation—again, judged solely on the grounds of marginal utility. What are we to make of languages of faith that might not hold up against Rorty’s philosophical analysis, but are democratically vital? And how should we reckon with the uglier abuses of philosophically rigorous but democratically dubious secular ideology across the modern age? What sort of modernist utopian democracy might emerge from a citizenry that’s parted ways with the quest for certainty and truth? Rorty is largely silent on such questions—mostly because he rules them out as irrelevant, ahistorical, or otherwise tainted with distracting and self-imploding meaning-seeking agendas. But it seems to me that they are pretty indispensable in making sense of our current political condition, which, alas, is a far cry indeed from both Whitman’s confident prophesying and Dewey’s radically contingent embrace of American democracy.

None of this is to diminish Rorty’s philosophic contributions, which remain provocative and engaging. It is, however, to ask what sort of modernist utopian democracy might emerge, pragmatically speaking, from a citizenry that’s parted ways with the quest for certainty and truth. (Rorty concedes that such a citizenry can easily turn fascist, as Hannah Arendt and others have argued, but breezily waves the prospect off: “The frequent complaint that a philosopher who holds the pragmatic theory of knowledge cannot give you a good reason not to be a fascist is perfectly justified. But neither can she give you a reason to be one”—not much cause for comfort in our current political plight.) Most of all, the array of urgent questions and crises facing our democracy makes one miss Richard Rorty’s voice: insistent, relentlessly questioning, and dedicated to the proposition that we can’t afford to let our democracy fail. Chris Lehmann @lehmannchris

Chris Lehmann is an editor-at-large for The New Republic and The Baffler.