The South African government has lost the country’s first climate change lawsuit after the hight court ruled against its plans for a coal-fired power station, the latest in a rising tide of international climate litigation.

Environmental NGO EarthLife Africa challenged the government’s approval of the proposed Thabametsi coal-fired power station on the grounds that it should have been preceded by an evaluation of its climate change impacts. The North Gauteng high court agreed and ordered the government to reconsider its approval, taking into account a full climate change impact assessment.

A draft assessment shows that the project slated for the drought-prone Limpopo province will produce significant greenhouse gas emissions, and that the climate impacts threaten the future viability of the plant. 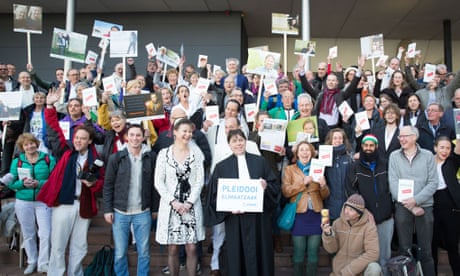 The case comes shortly after a groundbreaking climate case decided last month in Austria. A federal court blocked the expansion of Vienna’s international airport because the increase in carbon emissions that a new runway would generate is inconsistent with Austria’s commitments to tackle climate change. The Austrian decision not only echoes controversies around airport expansions in the UK and France; it’s also the latest example of courts around the world stepping in to hold governments to account for escalating global temperatures.

Since a landmark Dutch climate change case, filed by my colleagues, resulted in an order that the government significantly reduce its carbon emissions, lawsuits challenging inaction on climate change have been filed in courtrooms in Europe, North America, and the Asia-Pacific region. Some lawsuits target the inadequacy of policies intended to reduce carbon emissions (as in the US, New Zealand, Belgium and Switzerland) while others challenge individual projects that have potentially catastrophic consequences for the climate (as in Norway, where the government has permitted new drilling for oil in the Arctic).

In Pakistan, where rising temperatures are already threatening lives and livelihoods, a court found in favour of a farmer who argued that his rights to life and dignity were under threat because of the government’s inadequate climate change policy.

Climate change litigation is an invaluable strategy at a time when governments have failed to live up to their repeated promises, affirmed most recently in the Paris agreement, to prevent dangerous interference with the climate system. Current pledges to reduce emissions are projected to lead to warming of 3.2C above pre-industrial levels – way above the agreed target of “well below 2C” and likely to lead to radical changes in the environment (not to mention agriculture, migration, economics, and life for many species and people).

Aside from highlighting the obligations of governments to protect their citizens from foreseeable harm, these cases have the considerable advantage of putting the facts of climate change on the public record. These facts, endorsed by governments through the adoption of scientific reports at the UN, include that climate change is real; that it is caused by human activity; that it will dramatically affect every region in the world; and that it is more cost-effective to act now than later. While it might be expedient for politicians to obfuscate these facts, it is another matter altogether to produce evidence to substantiate their position in court.

The political and social ripple effects of climate change cases are also enormous. While the Dutch government is appealing against the court’s ruling in the Netherlands, the case has already had a huge impact on national policy making and public debate.

Emboldened by the ruling, opposition MPs have drafted a new, more ambitious climate change act and a majority of parliamentarians have voted to phase out coal-fired power as quickly as possible. It has also catalysed an unprecedented level of social mobilisation around climate change as an issue.

These cases are powerful vehicles for the progressive action on climate that is urgently needed. Far from being an undue interference with policy making processes, courts are reaching decisions in accordance with existing law and science. For as long as governments fail to take the steps necessary to avert dangerous change, courts can be expected to act as vital checks on political inaction.

A court in The Hague has ordered the Dutch government to cut its emissions by at least 25% within five years, in a landmark ruling expected to cause ripples around the world.

To cheers and hoots from climate campaigners in court, three judges ruled that government plans to cut emissions by just 14-17% compared to 1990 levels by 2020 were unlawful, given the scale of the threat posed by climate change.

Jubilant campaigners said that governments preparing for the Paris climate summit later this year would now need to look over their shoulders for civil rights era-style legal challenges where emissions-cutting pledges are inadequate.

“Before this judgement, the only legal obligations on states were those they agreed among themselves in international treaties,” said Dennis van Berkel, legal counsel for Urgenda, the group that brought the suit.

“This is the first a time a court has determined that states have an independent legal obligation towards their citizens. That must inform the reduction commitments in Paris because if it doesn’t, they can expect pressure from courts in their own jurisdictions.”

In what was the first climate liability suit brought under human rights and tort law, Judge Hans Hofhuis told the court that the threat posed by global warming was severe and acknowledged by the Dutch government in international pacts.

“The state should not hide behind the argument that the solution to the global climate problem does not depend solely on Dutch efforts,” the judges’ ruling said. “Any reduction of emissions contributes to the prevention of dangerous climate change and as a developed country the Netherlands should take the lead in this.”

After a legal campaign that took two and a half years to get to its first hearing in April, normally dispassionate lawyers were visibly moved by the judge’s words. “As the verdict was being read out, I actually had tears in my eyes,” Roger Cox, Urgenda’s lead advocate, told the Guardian. “It was an emotional moment.”

Young activists in court said that the ruling had gone some way to restoring Dutch national pride, which has been dented as Denmark, Germany and even the UK overtook the Netherlands, once seen as a European climate leader, in the green economy race.

The Dutch Socialist party MP Eric Smaling cautioned though that “some people will feel proud but others are more unhappy about the influx of refugees. So far climate action has too much been the last baby of a relatively leftist elite.” He called for a wide coalition to spread the climate action message before elections in early 2017.

The Dutch government has not decided whether to appeal the court’s decision yet, but opposition politicians are steeling themselves for the prospect.

Stientje Van Veldhoven, an MP and spokesperson for the D66 Liberal opposition in parliament noted that the government had yielded to a comparable, if more limited, ruling ending gas extraction in part of the giant Groningen gas fields earlier this year.

In a statement on behalf of prime minister Mark Rutte’s cabinet, the Dutch environment minister Wilma Mansfeld said that the government’s strategy was to implement EU-wide and international agreements.

“We and Urgenda share the same goal,” Mansfeld said. “We just hold different opinions regarding the manner in which to attain this goal. We will now examine what this ruling means for the Dutch state.”

Some 886 plaintiffs organised by Urgenda had accused the Dutch government of negligence for “knowingly contributing” to a breach of the 2C maximum target for global warming.

Their legal arguments rested on axioms forbidding states from polluting to the extent that they damage other states, and the EU’s ‘precautionary principle’ which prohibits actions that carry unknown but potentially severe risks.

A UN climate secretariat article obliging states to do whatever is necessary to prevent dangerous climate change was also cited. So was the UN climate science panel’s 2007 assessment of the reductions in carbon dioxide needed to have a 50% chance of containing global warming to 2C.

Several legal sources said that ideas outlined in the Oslo principles for climate change obligations, launched in the Guardian in March, appeared to have been influential in the judge’s reasoning.

James Thornton, the chief executive of the environmental law group ClientEarth, hailed what he said had been a “courageous and visionary” ruling, that would shape the playing field for future suits.

Serge de Gheldere, the president of Klimaat Zaak, which is pursuing an almost identical case to Urgenda’s in Belgium said: “This gives us a lot of hope as it sets an incredible precedent. The government in Belgium will take a lot of notice of whats happened here today. This could be the first stone that sets an avalanche in motion.”

Professor Pier Vellinga, Urgenda’s chairman and the originator of the 2C target in 1989 said that the breakthrough judgement would have a massive impact. “The ruling is of enormous significance, and beyond our expectations,” he said.

The court also ordered the government to pay all of Urgenda’s costs.