The image of the lonely, pyjama-clad freelancer toiling away at home has become a cliché in the modern working world. And it’s one that the coworking community wants to change.

In practical terms, coworking spaces give self-employed people somewhere to work other than a dining table or a coffee shop. But many strive to provide their members with more than just a rented desk.

Now, coworking has become a worldwide movement that offers solutions to broader problems facing the growing number of independent workers.

As the labour market continues to shift from one where companies hire full-time permanent employees to one where they’re more likely to take on freelance and contract workers, perks like benefits, pensions and job stability are hard to come by.

While governments struggle to adjust employment laws to fit the changing nature of work, coworkers aren’t waiting around for policy to catch up to their reality.

Join us and grow independent media in Canada

“Coworking in general is serving the needs for a lot of the independent workforce,  said Ashley Proctor, the Vancouver-based executive producer of the Global Coworking Unconference Conference.

When she first started thinking about the benefits of coworking 15 years ago, she said, there were fewer than 10 coworking spaces in the world.

At The Tyee’s recent forum on work, (In)secure: The Future of Working, Proctor listed a few of the ways the movement is evolving to solve problems arising from increasing work precariousness.

From reducing the isolation experienced by freelancers to providing opportunities for professional and personal collaboration, Proctor said the coworking movement is filling gaps left by the steady retreat of traditional employment.

Within coworking spaces, groups of people band together for mutual support. For some, that might mean pooling resources and sharing expensive equipment. For others, coworking helps with work-life balance.

“Coworking can have benefits for women in caregiving roles,” said Proctor, who has spent the last 15 years launching coworking communities in Toronto and, more recently, in Vancouver.

She described groups of mothers in some coworking spaces that co-operate to help each other with childcare needs, taking turns to pick children up after school.

The flexibility of self-employment already benefits parents trying to juggle work and childcare, allowing for flexible hours and adaptable schedules. In coworking spaces with strong communities, there are opportunities to create further supports.

“It’s empowering,” said Proctor. “It allows them to be more flexible.”

During an interview with The Tyee, Proctor was skeptical that provincial or federal governments will act to give the increasingly fractured workforce the support it needs.

“I’m hoping that there will be some accountability and to see some government support and see them really step up and take this on as a serious issue,” she said. “I would love that. But I’m not counting on it.”

In the meantime, coworkers are solving their own problems. Proctor said the needs of coworking communities vary from city to city.

Some poll their members regularly to find out what they’re lacking. Then they set out to solve those problems. Proctor’s coworking health insurance plan COHIP emerged from these kinds of problem-solving efforts.

As executive producer of the GCUC, Proctor travels internationally to conferences — there’s one scheduled for Vancouver this October — that explore the issues facing independent workers and the future of work.

Members of coworking spaces, says Proctor, have slightly different priorities in different cities around the world. But she sees one common goal in all of them.

“The aims of the coworking movement are very much about creating community,” she said.

One of Proctor’s newer projects exemplifies those aims. When Vancouver’s 312 Main opens this fall on the corner of Main and Cordova Streets, it will be the largest coworking space in Canada.

Proctor, executive director of the space, says it will support existing non-profit organizations in the Downtown Eastside and help build ties between them.

“It’s quite an ambitious project. Because it’s so focused on social innovation it gets a lot of attention, but I feel like the smaller locally-driven and -led initiatives, which is my background actually, are the ones that are having the most effect in the community,” she said. “There’s a really vibrant coworking community in B.C. already.”

Melissa Hope is director of operations of Vancouver’s not-for-profit coworking and community space The Hive. In the two and a half years since she’s been with The Hive, Hope said she’s seen the coworking community in Vancouver grow. 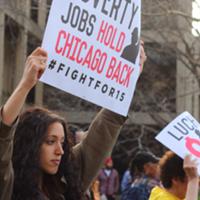 Insecurity or Opportunity? Exploring the Future of Work

“There’s been a growth in the variety of coworking spaces available and the number of spaces as well as the awareness of it amongst both non-coworkers and coworkers,” she said.

Recently, a group of the spaces around the province banded together to form a collective called Coworking B.C. The organization is still working out its mandate, but ultimately aims to promote the concept of coworking and build the movement.

Hope has been involved in the creation of Coworking B.C. and says the challenge is still awareness. Despite the fact that some of B.C.’s coworking spaces have existed for nearly 10 years, a lot of independent workers don’t know they exist.

“I think that to some extent coworking just has to advocate for itself and learn how to spread the word further,” said Hope. “Hopefully, together we can do more.”

The benefits of coworking, say its leaders, are well worth the price of membership. Proctor acknowledges that coworking can boost productivity and income, but she says the financial advantages aren’t the main benefit.

“Coworking increases productivity and happiness,” she said. “Happiness is the number one thing that we’ve heard from members across the world. People are more healthy, more productive, happier. It’s not just about work.”

Work is changing. The old days of steady jobs followed by comfortable pensions are long gone. Jobs these days are far more likely to be precarious, temporary, and part-time. Globalization has created pressure on companies to keep labour costs low. Automation has led to the loss of well-paid jobs in a variety of sectors. Technological advances have given rise to the gig economy and its multitude of independent contractors.

The flexibility of the modern job market suits some of us. But for those who need steady hours and a predictable income, it brings uncertainty and stress. So what’s a worker to do? Initiatives such as Ontario’s basic income pilot program may eventually offer part of the solution to the increasingly precarious world of work.

But there are still a lot of questions around the effectiveness of such programs. Until they’re answered, there’s no escaping it: most of us have to work. And for that matter, most of us want to.

On May 25, The Tyee is hosting an event called (In)secure: The Future of Working, which will dig into the questions around the changing nature of work. The Tyee checked in with three of the event’s speakers to find out where they see the biggest challenges, the best opportunities, and the most promising solutions.

On the role of unions in a changing labour market:

“The income gap that’s happening now has never been wider. As many people have pointed out, the rich are just getting so ludicrously rich. And at a certain point, people are not going to stand for it anymore. Maybe. And unions have a role to play in that.”

“They just have to find a way somehow to engage younger workers. And that’s not easy because younger people don’t know about unions, they hear about them and they don’t think they like them, and often the leadership is older.”

“Some unions are setting up youth committees and trying to engage younger workers. And unions are trying to get their message out rather than just looking at a specific bargaining unit and trying to sign them up.”

“The McDonald’s strikes are interesting – the day off for a better minimum wage, which doesn’t result in any union certifications. Unions support that and it’s growing in the United States. They’re lending their voice to these social movements around the nature of work and the low minimum wage and how younger workers are exploited.”

“It’s hard to roll back the clock to the old days. I don’t see how it’s going to happen. But I think they just have to keep up the message, getting younger people involved, and onto social media more.”

“It might be like vinyl. Maybe unions will come back and be seen as hip. You can’t rule that out.”

On the future of work:

“Most people will be independent workers, whether that be freelance, contract work, part time, self-employed. And because of the numbers that we’re looking at, the populations that are shifting over to that type of work, we’re going to run into a unique set of consequences.”

“One of [the potential solutions] would be the co-working movement, the collaborative workforce, people working together to achieve more than they could on their own.”

“The most important part for the coworking movement to me is not just the increased productivity and the access to facilities you see in a collaborative workspace, but because of the network, you’re making meaningful human connections, you’re building community.”

“We’ve been doing it without any governmental support for 15 years and been very successful. But a success story for COHIP would be if in five years we don’t need it anymore. Because why should it be up to me to provide this service to independent workers in Canada? It should be fully available to us all across Canada anyway.”

“There’s a lot of advocacy work to be done. And it could be something as simple as demanding some kind of legislation to ensure that independent contractors get paid on time or that there’s some form of system in place that can assist if they’re not.”

“With the numbers that we’re seeing now and the sheer volume, we have a lot of negotiating power that we didn’t have before.”

Henry Siu: RBC Research Professor in the Vancouver School of Economics at UBC.

On the effects of automation on the labour market:

“Automation, mechanization, digitization, these are all different incarnations of technological progress that we’ve been experiencing for hundreds of years. These processes have replaced human workers in certain spheres of the workplace and it’s always brought about newfound opportunities that you never could have imagined at the time.”

“One thing that is important is to understand the value of education in today’s society. Not simply to say that everybody needs to get a university degree, but certainly individuals need to understand that, more so today than in the past, learning and education and improving one’s abilities and skills is a lifelong pursuit. It’s not just something that ends at the age of 16 or 21.”

“I think it’s also important to understand the value of creativity and the ability to problem solve in novel ways. Those are skills that are becoming more and more valued in the economy.”

“The other thing that robots and computers and machines can never be better at than us is in terms of genuine human skills like the ability to communicate, to empathize. And so those sorts of tasks in the workplace are becoming more and more valuable over time.”