By Jen Christensen, CNN, January 30, 2019
(CNN)Heat and pregnancy do not mix. High temps don’t just make a pregnant woman uncomfortable, the heat can actually hurt the health of her baby — and with climate change, this will probably become a bigger problem.
A study in Wednesday’s Journal of the American Heart Association found that a larger number of babies will probably be born with congenital heart defects between 2025 and 2035 due to their mothers’ exposure to higher temperatures, triggered by climate change, while pregnant. This especially holds true for moms who were pregnant through spring or summer. Climate change could result in as many as 7,000 additional cases of congenital heart defects in the United States over an 11-year period, according to the study. The Midwest will probably see the biggest percent increase, followed by the South and Northeast regions of the United States. 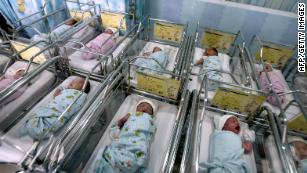 Climate change will affect gender ratio among newborns, scientists say
Earlier research found that climate change could “halt and reverse” progress made in human health over the past century, but there’s more limited research on theimpact that has on pregnancy, the authors said. Congenital heart defects are the most common type of birth defects and can hurt a baby’s overall health and potentially impact how their body works or develops.
“The potential increases in both the number of pregnant women and maternal heat exposure suggest an alarming effect that climate change may have on reproductive health,” the study said.
Researchers figured this out by looking at data collected in the the National Birth Defects Prevention Study, a large multistate, population-based study that investigated risk factors for major structural birth defects. They also looked at climate data from the US government.

Record number of Americans ‘very worried’ about climate change, report finds
Based on climate data projections, the entire United States will face higher temperatures. New York, Midwest states such as Iowa and southeastern states such as Georgia and North Carolina will probably see greater temperature increases. There will be greater variation in temperature for southern states such as Texas and Arkansas and out west in states such as California in the summer months.
It’s unclear what the link is between high temperatures and congenital heart problems. Animal studies foundthat heat can cause fetal cell death and can negatively impact the proteins that play a crucial role in fetal development.
This current research builds on earlier work that found when the temperature stays high, it can hurt a mother’s chances of carrying a baby to term. Extreme heat also puts moms at risk to give birth early. Moms exposed to high heat have a bigger chance of having a baby that’s small or underweight. Mothers who endure high temperatures early in their pregnancy have a much greater risk that their baby will have congenital heart problems, earlier research has found.
Get CNN Health’s weekly newsletter

Sign up here to get The Results Are In with Dr. Sanjay Gupta every Tuesday from the CNN Health team.

“Our findings underscore the alarming impact of climate change on human health and highlight the need for improved preparedness to deal the anticipated rise in a complex condition that often requires lifelong care and follow-up,” said study author Dr. Shao Lin, a professor in the School of Public Health at the University of Albany. “Although this study is preliminary, it would be prudent for women in the early weeks of pregnancy to avoid heat extremes similar to the advice given to persons with cardiovascular and pulmonary disease during heat spells.”