According to a new report by the International Council on Clean Transportation. Many cities have a goal to decarbonize the transport sector,” says Nic Lutsey, lead author of the report. “The more we look at their plans, they more we see them push electric vehicles as a central solution.” Their policies offer a roadmap to increasing EV adoption, and show how, when regulations and incentives align, it’s possible to make shifts in the wider transportation system. 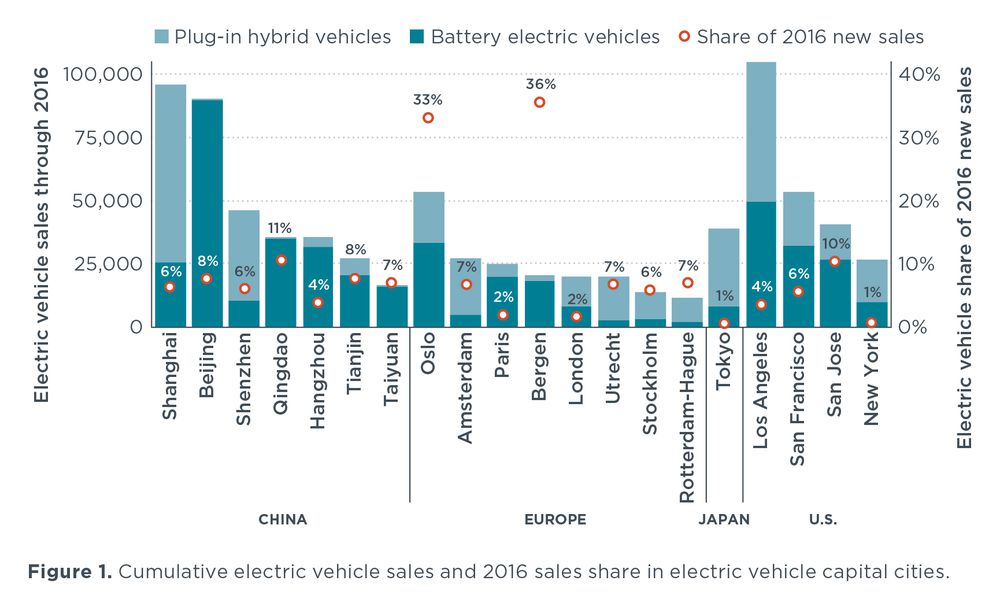 The report underscores how many mayors and civic leaders see electric vehicle as central to their climate and transportation goals. With the Mayor of London Sadiq Khan declaring that he’ll make a section of Oxford Street car-free, and a dozen C40 cities pledging to create emission-free zones, there’s a push to remove and regulate internal combustion vehicles. And with EV sales rising and more automakers, such as Ford, pledging to expand their EV fleets, many see city policy as a way to expand the market.  While there’s a higher percentage of vehicles per capita in the Norwegian cities of Oslo and Bergen (36 and 33 percent of the vehicles in these cities are electric), where the government has much higher incentives for EV purchase, he said China (which had seven cities on the list) and California (specifically LA, San Francisco, and San Jose) account for roughly half of the electric vehicles on the road.  “These two regions are developing the playbook to bring EVs into the world,” he says.

The key, he says, is to match incentives with local context. China’s registration quota, which limits car purchases in polluted urban areas, was tweaked so electric vehicles were exempt, making them a more attractive purchase. Norway, with more rugged terrain, promotes EV sales in part by exempting them from the country’s numerous bridge and tunnel tolls. The best policies combine vehicle CO2 or efficiency regulations, consumer incentives, and direct electric vehicle requirements, such as the California Zero Emission Vehicle regulation, which has been adopted by 10 states.

Lutsey is also seeing cities adopt EVs as a solution to multiple problems. It’s not just an answer for issues of clean energy, climate change, and air pollution. Many have started, or are considering, using them to help reduce congestion: Beijing is already using registration policies, and emissions-free zones would further limit the appeal of traditional cars.

“Cities love learning from other cities,” he says. “We’re hoping to show that these proliferation ideas are working, and these cities can crib ideas from each other. They’re becoming more confident, and figuring out how to get over the hurdles of promoting EVs for car-share programs, city fleets, and charging.”