The electric power sector accounts for 29% of the U.S.’s greenhouse gas (GHG) emissions, and electricity demand is expected to increase between now and 2050, making GHG emissions reductions from our electricity system one of the most promising ways to address climate change.

While many technologies can reduce power sector emissions, carbon capture and storage (CCS) has gained support in Congress – but it’s the most expensive option available.

Our analysis shows coal plants equipped with CCS are nearly three times more expensive than onshore wind power and more than twice as expensive as solar photovoltaics (PV).  Although these costs will decline with research and development, the potential for cost improvement is limited. Coal with CCS will always need significant subsidies to complete economically with wind and solar.

A CCS-equipped power plant burns carbon-based fuels (usually coal) and uses equipment to extract carbon dioxide (CO2) from the exhaust gases.  In most instances, the CO2 then must be transported via pipeline for injection and storage underground, such as a depleted oil or gas field, a saline formation, or an unmineable coal seam.  Once the storage site is full, the well must be sealed, and the area must be monitored for thousands of years to prevent the release of CO2. 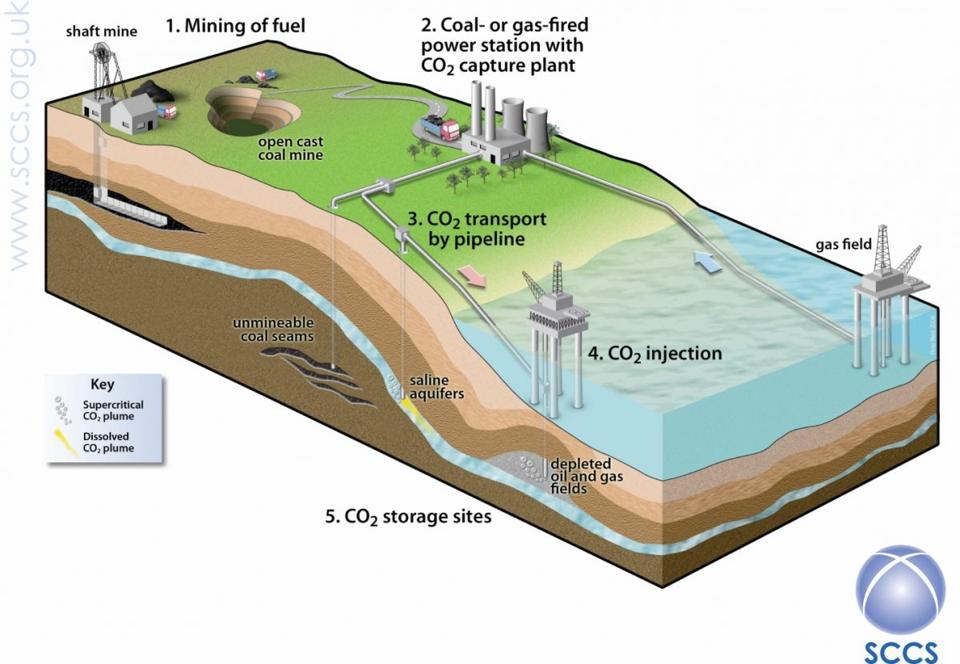 Diagram of CCS lifecycle, from coal mining through carbon storage. Although this diagram shows CO2 being storaed under the sea floor, it may also be stored beneath land.

CCS is a favorite emissions reduction option for many politicians and coal companies because it does not involve transitioning to a different electricity source (such as wind, solar, or nuclear power). It holds out the promise that we can continue to burn fossil fuels, potentially in large quantities, without negative climate change impacts. Perhaps unsurprisingly, many of the world’s largest oil and gas companies recently invested $1 billion in CCS research.

The largest problem facing CCS today is cost.  In addition to the costs of an ordinary coal-fired power plant (which in the U.S. is already quite high, about $92 per megawatt-hour [MWh]), a coal plant with CCS requires additional equipment, increasing upfront construction costs, and has additional operations and maintenance (O&M) expenses. Since a considerable amount of energy is required to extract, pump, and compress CO2, a plant with CCS must also purchase and burn more fuel to produce the same amount of electricity as a plant without CCS. Additional costs come from building pipelines to transport the CO2, injecting it underground, and monitoring the injection site.

We analyzed the cost of electricity for four types of power plants built in the U.S. in 2017: ultrasupercritical (modern) coal units, coal units that capture and store 90% of their CO2 emissions, onshore wind power, and utility-scale solar PV. We included capital, fuel, and O&M costs; the efficiencies (heat rates) of the coal plants, the plants’ capacity factors (what portion of the year they may generate power), fuel prices, construction time, financing costs (including inflation and interest rates), and depreciation. In the case of coal with CCS, we included the costs of CO2 transportation (assuming a 500 kilometer pipeline) and injection, as well as long-term monitoring. Government subsidies are not included for any of the technologies. Our full data sources (primarily the U.S. EIA and National Renewable Energy Laboratory), assumptions, and calculations are available online to download.

Even without CCS, a new coal plant in the U.S. costs more than onshore wind and solar PV per unit of electricity it generates. Coal plants that capture and store 90% of their carbon emissions cost nearly two-thirds more than an equivalent coal plant without CCS to produce the same amount of electricity. A new solar PV or wind plant is between half and a third the price of a new coal unit with CCS and emits zero CO2. As a source of low-carbon power, CCS can’t compete on economics with wind and solar.