By The Editorial Board
The editorial board represents the opinions of the board, its editor and the publisher. It is separate from the newsroom and the Op-Ed section.

This is the first in a two-part series on how to make the House of Representatives more representative. Read part two here.

We’re nearly two decades into the 21st century, so why is America still operating with a House of Representatives built for the start of the 20th?

The House’s current size — 435 representatives — was set in 1911, when there were fewer than one-third as many people living in the United States as there are now. At the time, each member of Congress represented an average of about 200,000 people. In 2018, that number is almost 750,000.

This would shock the Constitution’s framers, who set a baseline of 30,000 constituents per representative and intended for the House to grow along with the population. The possibility that it might not — that Congress would fail to add new seats and that district populations would expand out of control — led James Madison to propose what would have been the original First Amendment: a formula explicitly tying the size of the House to the total number of Americans.

The amendment failed, but Congress still expanded the House throughout the first half of the nation’s existence. The House of Representatives had 65 members when it was first seated in 1789, and it grew in every decade but one until 1920, when it became frozen in time. 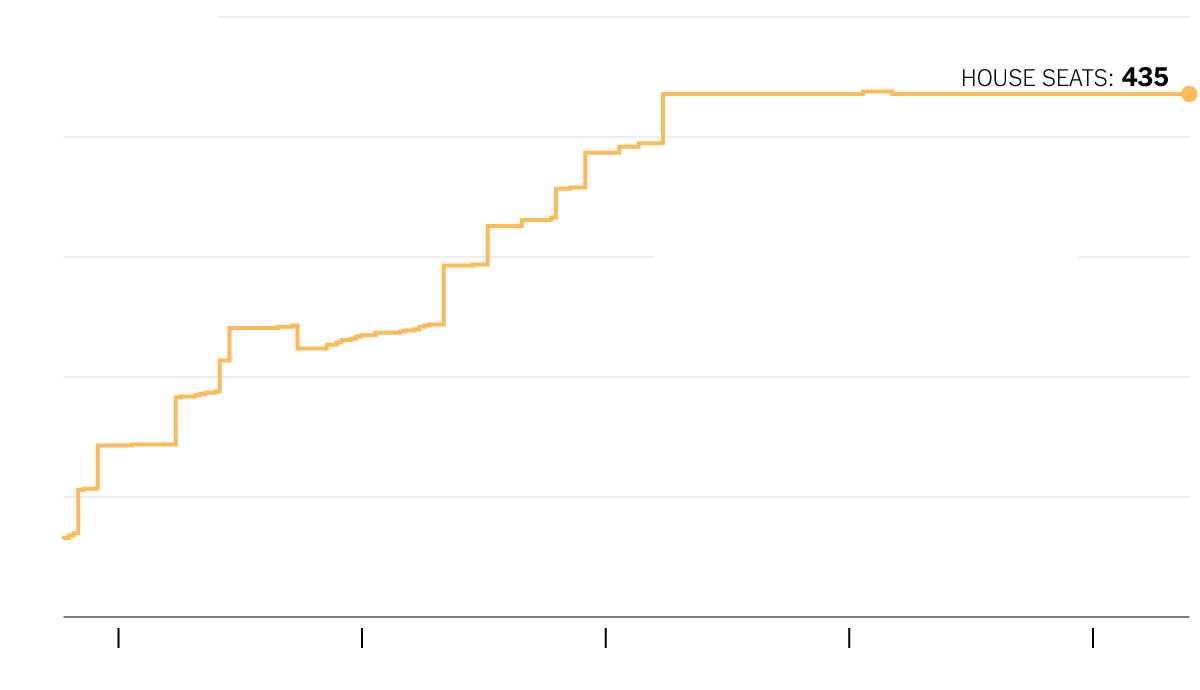 Since 1913, the number of House seats has held steady at about 435 while the country’s population has ballooned.

There’s a solution, which involves adding 158 new seats to the House of Representatives, making it proportionally similar to most modern democracies. To understand the implications of a larger House, we enlisted software developer Kevin Baas and his Auto-Redistrict program to draw 593 new congressional districts for the entire country. (Read on for an explanation of how we chose that number.) Then we used historical partisan scores to determine which party would win each district.

While our expanded House map hasn’t been subjected to the same testing as a real redistricting plan, it offers a sense of how a bigger House might affect the nation’s politics. One main takeaway: it would create a more competitive landscape, with 25 percent of seats qualifying as toss-ups, compared to just 10 percent today. Many states that elect only Republicans today would elect a Democrat or at least become more competitive, and vice versa. 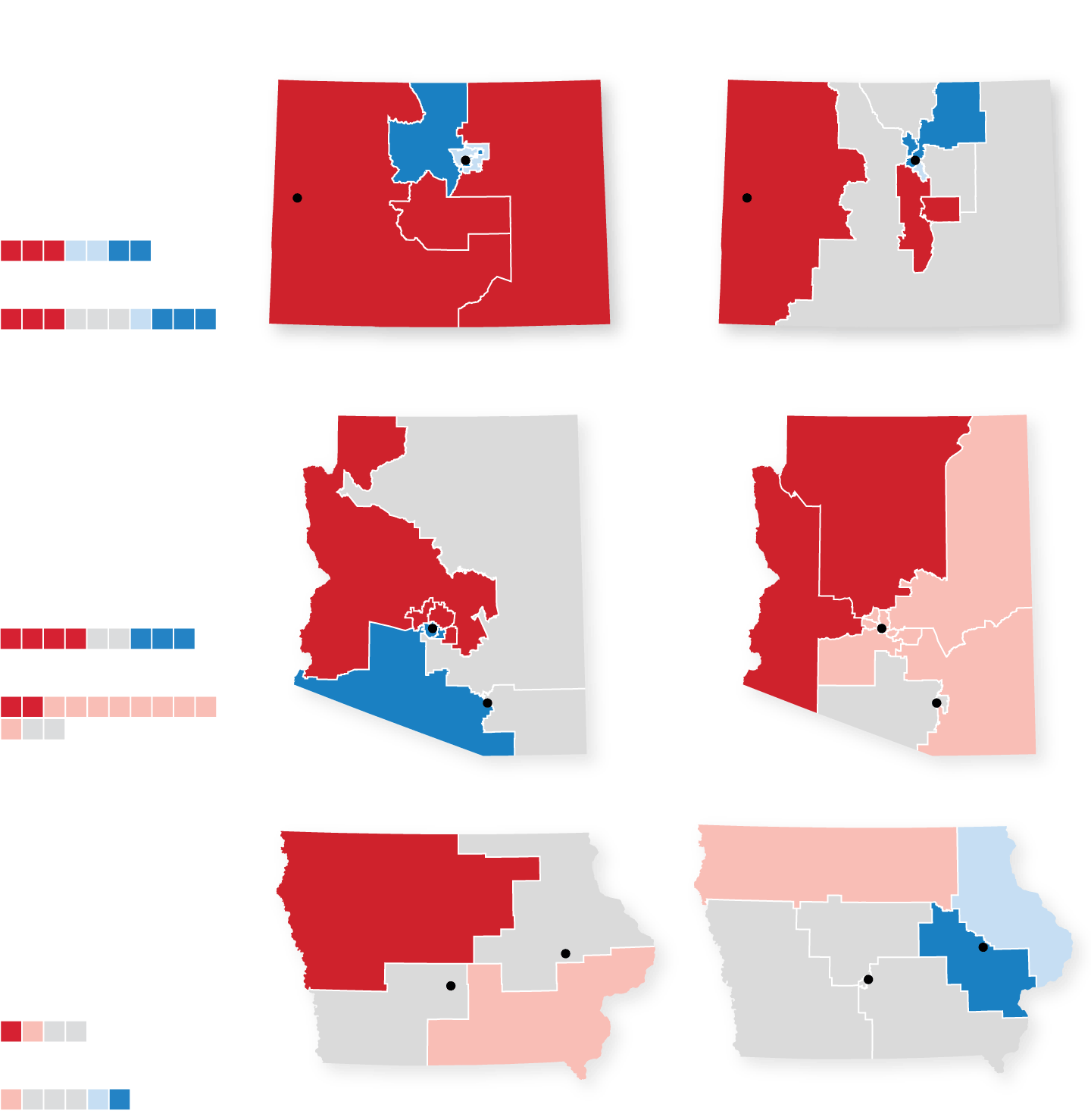 Colorado would add three districts under the new system. All of them could be tossups.

Arizona currently has three safe Democratic districts. Under the new system, it might not have any.

Iowa currently doesn’t have any reliably Democratic seats, but under the new system, it could pick up two.

The bottom line is that the House today is far too small, and that poses a big danger to American democracy.

For starters, how does a single lawmaker stay in touch with the concerns of three-quarters of a million people? The answer is she doesn’t. Research shows that representatives of larger districts are more likely to take political positions at odds with what a majority of their constituents want. These representatives are also ripe targets for lobbyists and special interests, whose money enables them to campaign at scale, often with misleading messages. Special interests are more likely than regular voters to influence policy positions and votes.

Second, the cap on the number of House members leads to districts with wildly varying populations. Montana and Wyoming each have one representative, but Montana’s population — 1.05 million — is nearly twice the size of Wyoming’s. Meanwhile, Rhode Island, which has roughly the same population as Montana, gets two seats. These discrepancies violate the basic constitutional principle of one-person-one-vote, causing voters to be unequally represented in the chamber that was designed to offset the Senate, where every state gets two seats regardless of population.

Third, the size of the House determines the shape of the Electoral College, because a state’s electoral votes are equal to its congressional delegation. This is one of the many reasons the college is an unfair and antiquated mechanism: States that are already underrepresented in Congress have a weaker voice in choosing the president, again violating the principle that each citizen should have an equal vote.

There’s no constitutional basis for a membership of 435; it’s arbitrary, and it could be undone by Congress tomorrow. Congress set it in 1911, but following the 1920 census — which counted nearly 14 million more people living in the United States — lawmakers refused to add seats out of concern that the House was getting too big to function effectively. Rural members were also trying to forestall the shift in national power to the cities (sound familiar?), where populations were exploding with emigrants from farm country and immigrants from abroad.

In 1929, Congress passed a law capping the size of the House and shifting responsibility for future reapportionments onto the Commerce Department. That’s why, more than a century later, we find ourselves with a national legislature far too small to fairly represent both the size and diversity of modern America. This warps our politics, it violates basic constitutional principles of political equality, and it’s only getting worse.

There’s a simple fix: Make the House bigger. Many Americans will groan at the thought of expanding a government they already consider too big and unwieldy. Polls consistently show that the public would rather throw the bums out than hire more of them.

That response is understandable; The Times itself editorialized against a House expansion in 1920, arguing that the chamber was “top-heavy” and “the legislative machinery … cumbrous.” The problem is that there’s virtually no evidence that a larger House would be less effective at governing. It is true that individual representatives would find their influence diluted by the addition of more members, but that’s not an argument against expansion. Nor would growing the House cost too much. Salaries for lawmakers and their staffs would total less than one million dollars per representative — which means a couple hundred representatives could be added for the price of, say, five F-14 fighter jets.

Most important, expanding the House would mean not just a government with more representatives, but one that is literally more representative — including more people from perennially underrepresented groups, like women and minorities, and making for a fuller and richer legislative debate.

What is the optimal number of House seats? There isn’t a simple answer. In the Federalist No. 55, James Madison wrote, “no political problem is less susceptible of a precise solution.”

By the founders’ own standards, the House could now hold nearly 11,000 members. That’s obviously too many to function. What about returning to the average district size of 1911? That would require more than 1,600 members — still probably too big.

There’s a better solution, which involves bringing America into line with other mature democracies, where national legislatures naturally conform to a clear pattern: Their size is roughly the cube root of the country’s population. Denmark, for instance, has a population of 5.77 million. The cube root of that is 179, which happens to be the size of the Folketing, Denmark’s parliament.

Population and Seats in 37 O.E.C.D. Countries 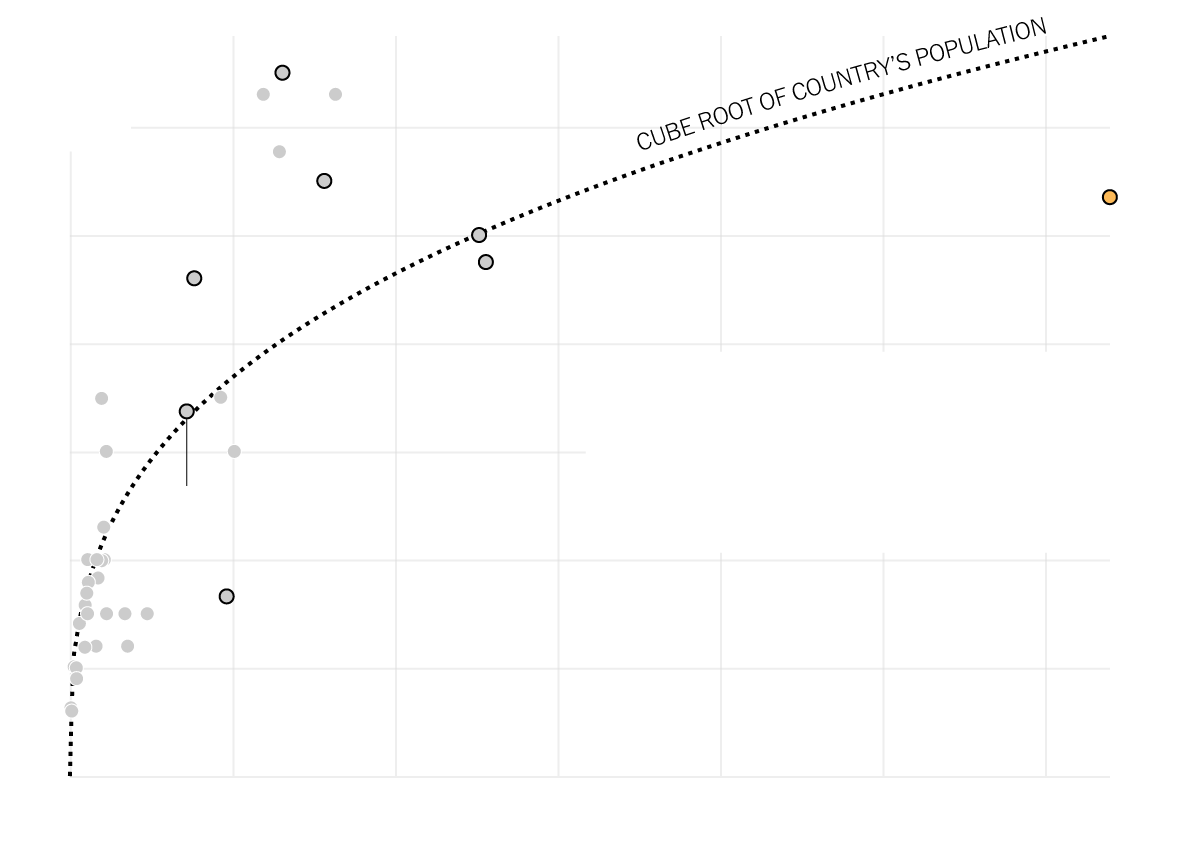 The United States is a marked exception to the cube root law, which says that the number of seats in the larger chamber of a country’s legislature should be approximately the cube root of the country’s population.

This isn’t some crazy Scandinavian notion. In fact, the House of Representatives adhered fairly well to the so-called cube-root law throughout American history — until 1911. Applying that law to America’s estimated population in 2020 would expand the House to 593 members, after subtracting the 100 members of the Senate.

That would mean adding 158 members. To some, this might sound like 158 too many. But it’s an essential first step in making the “People’s House” — and American government broadly — more reflective of American society today.

America urgently needs a larger House of Representatives, but we’ll only see the full benefits of that expansion if it happens alongside another electoral reform: multimember districts, elected by ranked-choice voting. The editorial board explains these in part two.