By Niraj Warikoo , Detroit Free, 24 May 2017 – Trapped in poverty by traffic tickets

Adrian Fowler didn’t have a valid driver’s license, but with her infant daughter running a 103-degree temperature one day in the winter of 2013, she had to drive.

Fowler’s driver’s license had been suspended earlier because she couldn’t afford to pay off traffic tickets for minor violations like speeding. On her way to the hospital, she was pulled over again for speeding in Ferndale, Fowler recalled.  The police officer was sympathetic and allowed Fowler to continue to the hospital, but he still gave her tickets for speeding and driving without a license. Total cost: $600.

Fowler, 31, said she now owes more than $2,000 in traffic tickets, fees and court costs from minor violations over the years in Ferndale, Oak Park and Eastpointe. But stuck in an $8.90 minimum-wage job in Detroit as a security guard, she says she’s unable to pay them and get back the use of her license, making it difficult to get to work and also from getting higher-paying job in the suburbs.

Trump looks to crack down on Medicaid, food stamps in budget

She’s one of an estimated 100,000 people in Michigan whose driver’s licenses are suspended every year by the state because they didn’t pay off traffic tickets to local courts for minor traffic violations. In a lawsuit filed this month in Detroit by two legal justice groups on behalf of them, Fowler and her attorneys argue that the State of Michigan has an unfair system that penalizes poor people, making it hard for many of them to maintain a driver’s license because they can’t pay off court debts.  They say it violates the Equal Protection Clause of the 14th Amendment by making it nearly impossible for many to drive.

“It’s hurt me tremendously,” Fowler, 31, told the Free Press. “They’re affecting working people who are trying to have the American Dream, trying to do what we can to survive.” 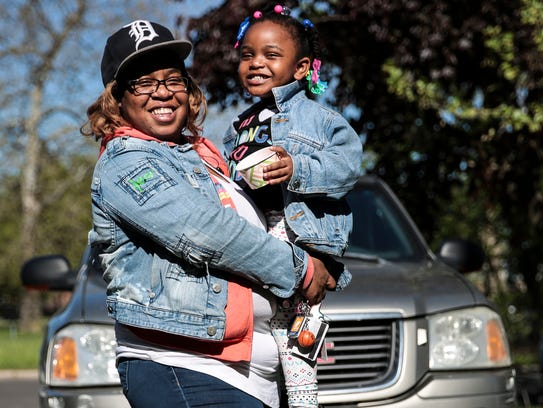 Buy PhotoAdrian Fowler of Detroit poses for a photo with her daughter AdaLynn Washington, 3, in front of her car, Monday, May 15, 2017 in Detroit.  (Photo: Junfu Han, Detroit Free Press)
Filed by Equal Justice Under Law in Washington, D.C., and the Sugar Law Center in Detroit, the lawsuit accuses the Michigan Department of State of “running a wealth-based driver’s license suspension scheme that traps some of the state’s poorest residents in a cycle of poverty.”

“The Secretary of State automatically and indefinitely suspends the driver’s licenses of people who owe court-ordered fines, costs, fees and assessments, even if they simply cannot afford to pay,” reads the lawsuit. “Without driver’s licenses, people already facing the harsh realities of owing court debt while living in poverty face additional hurdles of being unable to drive to and from work, get their children to day care, keep medical appointments and care for their family members.”

Fred Woodhams, spokesman for Secretary of State Ruth Johnson, who is named as the defendant in the lawsuit, said, “We don’t typically comment on pending litigation.”

“However, the department does suspend a person’s driver’s license as required by state law after a court notifies it that a traffic ticket was not paid or the person did not appear in court,” Woodhams said. “Traffic tickets are paid to the local court district.”

Similar lawsuits have been filed in recent years in California, Virginia and Tennessee, saying that suspending driver’s licenses are hurting the poor. What makes the Detroit situation unique, says the lawsuit, is that metro Detroit has the biggest job sprawl among major metro areas in the U.S., according to a Brookings Institution report. About 77% of jobs in the region are more than 10 miles outside the central business district in Detroit, the report said.

“Detroit’s urban sprawl and lack of adequate public transportation exacerbate the hardships of living without a license,” says the lawsuit.

The lawsuit represents those who are unable to pay fines for minor traffic infractions, such as speeding, stop sign and turn violations, said Phil Telfeyan, lead attorney on the lawsuit and executive director of the Equal Justice Under Law. It’s not about those with bigger violations of the laws such as driving under the influence, he said.

“It’s an injustice that harms people across the state,” Telfeyan said. “People are being punished simply for being poor.”

The lawsuit is asking the state to reinstate the licenses for people who can’t afford to pay off traffic tickets and stop the suspension of licenses. Long term, the groups are asking for “ability-to-pay hearings and lower fines for those who are indigent. It could offer community service as an alternative” to paying traffic tickets, Telfeyan said.

Suspending licenses should be tied to a person’s “dangerousness on the road rather than unpaid court debt,” he said.

Under law, the Secretary of State doesn’t offer any alternatives to getting licenses suspended once court officials notify them a person owes money to the courts.

Telfeyan said the current policies of the state also end up hurting the ability of government to collect the fines since suspending licenses makes it difficult for poor people to get to their jobs and to get higher-paying jobs that would help them pay off their debts.

“Michigan’s system is totally counterproductive,” he said. “By suspending the license of someone, that takes away the person’s ability to maintain a job, interview for new jobs.”

Others, though, support the current system in Michigan, saying it’s important to have a system that penalizes bad driving.

“Our roads are very dangerous due to unsafe drivers,” said Dearborn attorney Majed Moughni.  “Although the punishment may seem too harsh, it is a public safety concern that trumps the privilege to drive. In other words, if you can’t pay the fine, don’t break the traffic law.”

The lawsuit, filed May 4, illustrates the challenges that poor people face in the judicial system, say advocates.

Last year, the Department of Justice wrote an open letter to courts nationwide expressing concern about how poor people are affected by fees, fines and bond practices that sometimes cause people to stay in jail simply because they lack money. In 2015, Equal Justice Under Law filed a lawsuit in Jackson, Miss., over the jailing of people for traffic tickets who couldn’t afford to pay them. Also last year, the Michigan Indigent Defense Commission released a survey saying that poor people often don’t get adequate legal defense in Michigan courts.

Across Michigan, policies vary by district courts as to how they deal with poor people who can’t afford to pay traffic tickets and fines.

Fowler was offered a position with another security company that would have paid her $12.50 an hour, well above her current minimum wage, the lawsuit said. But she had to turn it down because it would have required her to travel across the metro area, which she can’t do because her license is suspended.

Fowler is also worried that she could get arrested because of her outstanding tickets, which would hurt her 3-year-old daughter.

“When Ms. Fowler went to the Ferndale courthouse to tell them that she would not
be able to pay the $600, she was told that if she did not return in three weeks with the full amount, a warrant would be issued for her arrest,” the lawsuit said.

Another plaintiff in the lawsuit, whose license has been suspended, is Kitia Harris, 25, of Detroit, who suffers from interstitial cystitis, a bladder condition that causes internal pain, making it difficult for her to stand and walk. She said she was laid off from her job in 2015 and is currently on disability.

In October, she was given a ticket by a police officer in Ferndale for impeding traffic. Harris said the officer told her she was going 5 to 10 m.p.h. over the speed limit. The ticket was $150, which she was unable to pay. It went up to $276.

“After receiving notices that her payment was due and being unable to pay, Ms.
Harris received a notice in the mail that her driver’s license had been suspended,” reads the lawsuit.  “Ms. Harris currently owes a total of $276 to get her license reinstated, $150 for the original ticket, $81 in penalties accrued for nonpayment, and a $45 license clearance fee.”

Harris said she is now sometimes unable to make her medical appointments, which she has often, unless she can get someone to drive her.

“It’s very difficult for me,” Harris told the Free Press. “I have a lot of different appointments, urology appointments, pain management. Not being able to drive myself, it can get very hard.”

Sometimes, Harris has to pay someone to drive her, which is costly on her limited budget of $1,218 per month in disability benefits she receives for herself and 8-year-old daughter.

Harris said, “I’m not for people breaking the rules, but I don’t think your license should be suspended because of your tickets. You never know what people are going through. Some people may not have jobs, and those that have jobs, need their car to get to work. I think it’s a bit much … I don’t think it’s fair.”