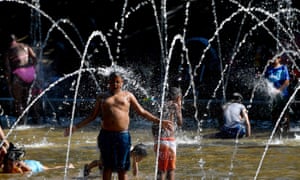 ‘For heatwaves, our options are now between bad or terrible,’ says the lead researcher behind the new study. Photograph: Gerard Julien/AFP/Getty Images

Nearly a third of the world’s population is now exposed to climatic conditions that produce deadly heatwaves, as the accumulation of greenhouse gases in the atmosphere makes it “almost inevitable” that vast areas of the planet will face rising fatalities from high temperatures, new research has found.

Climate change has escalated the heatwave risk across the globe, the study states, with nearly half of the world’s population set to suffer periods of deadly heat by the end of the century even if greenhouse gases are radically cut.“For heatwaves, our options are now between bad or terrible,” said Camilo Mora, an academic at the University of Hawaii and lead author of the study.

High temperatures are currently baking large swaths of the south-western US, with the National Weather Service (NWS) issuing an excessive heat warning for Phoenix, Arizona, which is set to reach 119F (48.3C) on Monday.The heat warning extends across much of Arizona and up through the heart of California, with Palm Springs forecast a toasty 116F (46.6C) on Monday and Sacramento set to reach 107F (41.6C). The NWS warned the abnormal warmth would “significantly increase the potential for heat-related illness” and advised residents to drink more water, seek shade and recognize the early symptoms of heat stroke, such as nausea and a racing pulse. 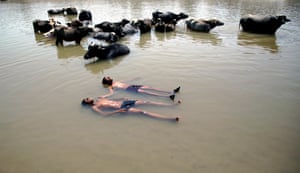 Mora’s research shows that the overall risk of heat-related illness or death has climbed steadily since 1980, with around 30% of the world’s population now living in climatic conditions that deliver deadly temperatures at least 20 days a year.The proportion of people at risk worldwide will grow to 48% by 2100 even if emissions are drastically reduced, while around three-quarters of the global population will be under threat by then if greenhouse gases are not curbed at all.“Finding so many cases of heat-related deaths was mind blowing, especially as they often don’t get much attention because they last for just a few days and then people moved on,” Mora said.“Dying in a heatwave is like being slowly cooked, it’s pure torture. The young and elderly are at particular risk, but we found that this heat can kill soldiers, athletes, everyone.”

The study, published in Nature Climate Change, analyzed more than 1,900 cases of fatalities associated with heatwaves in 36 countries over the past four decades. By looking at heat and humidity during such lethal episodes, researchers worked out a threshold beyond which conditions become deadly.

This time period includes the European heatwave of 2003, which fueled forest fires in several countries and caused the River Danube in Serbia to plummet so far that submerged second world war tanks and bombs were revealed. An estimated 20,000 people died; a subsequent study suggested the number was as high as 70,000.A further 10,000 died in Moscow due to scorching weather in 2010. In 1995, Chicago suffered a five-day burst of heat that resulted in more than 700 deaths.  However, most heat-related deaths do not occur during such widely-covered disasters. Phoenix, for example, suffered an unusually hot spell last June that resulted in the deaths of at least four people. Hyperthermia, an excess of body heat, can lead to heat stroke and a potential inflammatory response that can kill.

Dying in a heatwave is like being slowly cooked, it’s pure torture

Mora said the threshold to deadly conditions caries from place to place, with some people dying in temperatures as low as 23C. A crucial factor, he said, was the humidity level combined with the heat.“Your sweat doesn’t evaporate if it is very humid, so heat accumulates in your body instead,” Mora said. “People can then suffer heat toxicity, which is like sunburn on the inside of your body. The blood rushes to the skin to cool you down so there’s less blood going to the organs. A common killer is when the lining of your gut breaks down and leaks toxins into the rest of your body.”

Global warming is a potent instigator of deadly heat, with research from University of California, Irvine this month finding the probability of a heatwave killing in excess of 100 people in India has doubled due to a 0.5C increase in temperature over the past 50 years.“The impact of global climate change is not a specter on the horizon. It’s real, and it’s being felt now all over the planet,” said Amir AghaKouchak, UCI associate professor and co-author of that study.“It’s particularly alarming that the adverse effects are pummeling the world’s most vulnerable populations.”

Elevated temperatures and dry conditions have been exacerbated by the clearing of trees, which provide shade and cooling moisture, in urban areas. Mora said that while adaption such as government heat warnings and the increased use of air conditioning has helped reduce deaths, this was not a viable long-term solution.“The heat means that we are becoming prisoners in our own homes – you go to Houston, Texas in the summer and there’s no-one outside,” he said.“Also, the increased use of air conditioning means that electrical grids fail, as has happened in New York City, Australia and Saudi Arabia. We need to prevent heatwaves rather than just trying to adapt to them.”

The Guardian, June 2017 – Lethal Heat Risk Rising in the UK

Public Health England warned on Friday before the high temperatures over the weekend that “for some people, such as older people, those with underlying health conditions and those with young children, the summer heat can bring real health risks”.

The lethalness of heatwaves is often hidden because the total number of deaths is not reported until many months after they have happened.

In its annual report last November on deaths over the previous 12 months, an analysis by the Office for National Statistics (ONS) showed that, while there were markedly more deaths during the winter, a spike in casualties was evident on 19 July 2016.

On that date, there were 1,661 deaths recorded in England, compared with the five-year daily average of 1,267. The ONS pointed out that this peak coincided with the hottest day of the year, with maximum temperatures of 31C in some parts of the country.

Public Health England on Monday raised the level of its “heat-health watch” in anticipation of further hot weather this week, with the Met Office forecasting daytime temperatures of more than 30C across parts of the country.

The level-three amber warning, one level below a national emergency, advises people to stay out of the sun, keep homes cool, and check that anyone “at special risk” knows how to cope with the conditions.

However, the Committee on Climate Change has highlighted a worrying lack of understanding of heatwave risks which is increasing the number of people that succumb in hot weather.

The 2014 progress report to parliament by its adaptation sub-committee found that heat contributes to about 2,000 premature deaths each year in the UK, and that this figure could rise to about 7,000 annually in the 2050s due to the impact of climate change and population growth.

It concluded that “the uptake of measures to increase cooling capacity in existing homes is currently very low”, and suggested that this may be because “the public appear to perceive that heatwaves and hot weather have become less common over time”.

It cited research on a representative sample of the UK public who believed that hot weather had become less common during their lifetimes.

The study did not explore the influence of coverage of extreme weather by the UK media. Many national newspapers and broadcasters have downplayed the risks of heatwaves and flooding by amplifying the false claims of climate change scepticsthat there has been no increase in extreme weather events.

In its assessment two years ago of the government’s National Adaptation Programme, the Committee on Climate Change warned that “there is low awareness amongst the general public about how the risks from heat are changing”.