A quantum leap forward in air conditioning technology.  “Refrigerators and air conditioners based on HFCs and HCs are also relatively inefficient,” said Dr. Xavier Moya of the University of Cambridge. “That’s important because refrigeration and air conditioning currently devour a fifth of the energy produced worldwide, and demand for cooling is only going up.”

One-fifth of the energy consumed in the world today is use to cool people and things. As average temperatures rise, more energy will be devoted to air conditioning for overheated humans. Conventional air conditioning operates on principles that date back to 1833, when John Gorrie was appointed chief medical officer of the US Naval Hospital in Apalachicola, Florida.

At that time, the area around the tiny fishing village was a mosquito infested swamp and malaria a common ailment at the hospital. Gorrie wanted a way to cool his feverish patients and invented a wooden box with a crude piston inside. A wood burning steam engine compressed the air inside the box and when it was released it expanded and became somewhat cooler than the surrounding air. The rest, as they say, is history.

Since then, engineers have learned how to mechanically compress gases like hydrofluorocarbons and hydrocarbons. When the pressurized gases expand, they drop in temperature, cooling the surrounding air. The problem is, both are flammable and harmful to the environment when released into the atmosphere. The process is also quite inefficient in terms of how much cooling is obtained from a given amount of energy.

Moya and his colleagues in Spain have discovered a way to achieve cooling by changing the microscopic structure of plastic crystals. The changes can be achieved by applying a magnetic field, an electric field, or through mechanical force. For decades, this process has been inferior to the compression of gases but the researchers have found that using a plastic crystal known as neopentylglycol leads to results that are as good as conventional methods.

Neopentylglycol or NPG is non-toxic, non-flammable, and made from readily available organic compounds. The word “plastic” in “plastic crystals” refers not to the crystal’s chemical composition but rather to its malleability. Plastic crystals lie at the boundary between solids and liquids. NPG is commonly used to make paints, polyesters, plasticizers, and lubricants. It’s not only widely available, it is also inexpensive.

According to Science Daily, NPG molecules are composed of carbon, hydrogen, and oxygen. They are nearly spherical and have weak chemical bonds between molecules. These loose bonds permit the molecules to rotate relatively freely. Compressing NPG yields unprecedentedly large thermal changes due to molecular reconfiguration. The temperature change achieved is comparable with those typically associated with compressed HFCs and HCs.

Lower cost, eco-friendly, high efficiency coolants could be hugely important to New York City’s plan to lower the carbon emissions from its largest buildings by 40% over the next decade. Many of those buildings rely on outdated, inefficient cooling technology that soaks up lots of electricity.

Building owners are concerned that the cost of meeting the new guidelines will be enormous, but if new technology could lower their utility bills, that would take some of the sting out of the city’s initiative. Professor Moya is now working with Cambridge Enterprise, the commercialization arm of the University of Cambridge, to bring this technology to market. Let’s hope that happens soon.

Climate advocates know that meeting the goals of the Paris climate accords means more than generating more renewable energy. It also requires reducing emissions from existing sources. At present, 67% of all greenhouse gas emissions  in New York City come from buildings, not from transportation as you might expect.

On April 18, the city council of New York gave its approval to an ambitious plan that calls for every building in the city more than 25,000 square feet in size to reduce its carbon emissions by 40% no later than 2030. The new policy will apply to more than 50,000 buildings in the city, including Trump Tower.

Huge deal!!! New York City just passed a #GreenDeal4NY which included a huge commitment to retrofit old buildings (and create thousands of jobs in the process). Such thanks to amazing organizers who made this happen–and who are transforming the planet’s most diverse city!

VICTORY!!
We won on #DirtyBuildings!!

Buildings account for 70% of New York City’s carbon emissions. This bill is a huge victory for working families and those suffering from asthma. Plus, it will create thousands of green jobs. #GreenNewDeal4NY 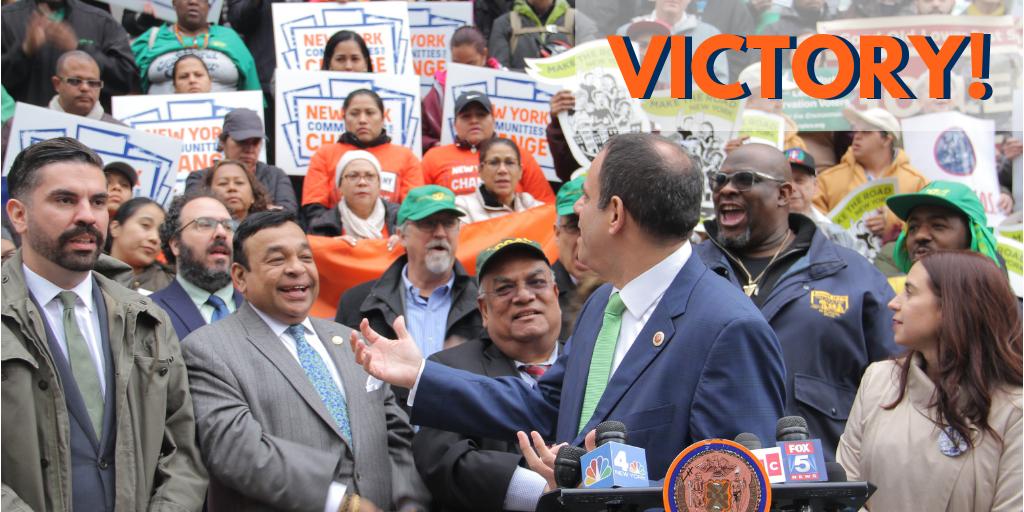 974 people are talking about this

“It will be the largest emissions reduction policy ever, in any city,” says city councilor Costa Constantinides, who led the campaign to enact the new policy. According to The Guardian, the law puts a cap on how many tons of carbon a building may produce per square foot, with different limits for residential, commercial, and industrial buildings.

To reach the goal, many buildings will need to replace heating or air conditioning systems with more efficient equipment. Energy efficient windows and better insulation will also be part of the plan. Finally, converting as many systems as possible to run on renewable electricity rather than fossil fuels will be a necessary part of meeting the new requirements.

Not everyone is happy with the new policy. “The approach taken today will have a negative impact on our ability to attract and retain a broad range of industries, including technology, media, finance and life sciences, that provide opportunity and continued economic growth that is so important for our city,” says John Banks, president of the Real Estate Board of New York.

Rent stabilized apartments will be exempt from the caps, though they will be required to do some upgrades to improve energy efficiency. Churches, synagogues, and mosques are also exempt. What is surprising is the city’s public housing units are exempt as well, which seems like a “Do as we say, not as we do” position. John Banks says the exceptions unfairly leave “mostly market-rate housing and commercial buildings to shoulder the entire burden of what is undeniably a shared societal problem.” He has a point.

Others complain the new policy does not go far enough. They point out that huge energy savings are possible with new refrigerants and the cooling equipment designed to operate using the latest technology. Once again, they are not wrong, but the burden of the new regulations should incentivize building owners to retrofit existing buildings with the most energy efficient air conditioning devices available.

The owners of buildings that do not meet the carbon reductions mandated could be fined up to $268 a year for every excess ton of carbon they emit. That could add up to millions of dollars in fines for the worst offenders. A carbon credit trading system may follow, but it has not progressed past the planning stage as of yet. The city’s long range goal is to reduce the carbon emissions from buildings 80% by 2050.

Under the plan, new buildings will be required to have “green” roofs or rooftop solar systems, requirements that Paris initiated four years ago. San Francisco is the only US city to have enacted similar requirements so far.

Mayor Bill DeBlasio is expected to approve the city council’s bold new initiative. “It’s going to revolutionize our ability to reduce emissions through our buildings, which are really our number one problem here in New York City,” he says. “We were going to need to do something very aggressive, particularly because the federal government is not doing their role.”