MONTGOMERY, Ala. — Arthur St. Clair, a minister, was lynched in Hernando County, Florida, in 1877 for performing the wedding of a black man and white woman.

Fred Rochelle, 16, was burned alive in a public spectacle lynching before thousands in Polk County, Florida, in 1901.

David Walker, his wife, and their four children were lynched in Hickman, Kentucky, in 1908 after Mr. Walker was accused of using inappropriate language with a white woman.

Lacy Mitchell was lynched in Thomasville, Georgia, in 1930 for testifying against a white man accused of raping a black woman.

Jesse Thornton was lynched in Luverne, Alabama, in 1940 for addressing a white police officer without the title “mister.”

These appalling death notices — there are 90 in all, based on archival accounts dating from between 1877 and 1950 — fall like blows as you read them, one after another, lined up like epitaphs on a long wall at the new National Memorial for Peace and Justice in this city. And the shock spreads and deepens when you delve into the larger, and continuing, story of American racial violence as told in another newly opened cultural site here, the Legacy Museum: From Enslavement to Mass Incarceration.

Historically, accounts of the lynching of African-Americans appeared in regional newspapers but seldom made their way into the North-based mainstream press. Photographs were rarely published anywhere. (These existed, but usually circulated privately, sometimes as postcards.) The most visible alert New York City had of such killings came from the National Association for the Advancement of Colored People, which periodically flew a flag from its Fifth Avenue office window reading “A Man Was Lynched Yesterday.” Mostly, though, lynching met with public silence, which lasted a long time.

That silence has been decisively broken with the opening of the memorial and the museum. Both were created by the Equal Justice Initiative, a nonprofit legal advocacy group directed by Bryan Stevenson and based in Montgomery. Both address the subject of history in a way unusual until recently for American institutions: with a truth-telling, uplift-free prosecutorial directness. And both approach it by different means. 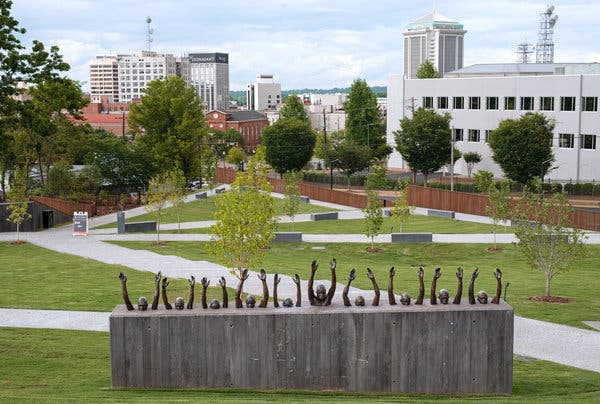 The Memorial for Peace and Justice does so visually, through its design. Conceived as a single immense installation, it’s dedicated to more than 4,000 African-Americans who were lynched by white Americans, and evokes their deaths in a language of stripped-down abstract sculpture. The Legacy Museum does its commemorative work in the opposite way, through an accumulation of detailed data, a near-overwhelming amount it, placing lynching within a broader context of white-on-black terrorism that goes back to the trans-Atlantic slave trade, in which Montgomery played a role, and forward to the warehousing of black men in prisons today.

Located on the site of a building that functioned as a holding pen for enslaved men and women, the museum stands halfway between the Alabama River port where new arrivals landed and the auction market at Court Square a few blocks uptown. The space isn’t large but it’s jam-packed with information — texts, photographs, videos and touch-screen animations — layered in a way that keeps your attention constantly on the move.

In format, it resembles the Mississippi Civil Rights Museum recently opened in Jackson, though the two differ in emphasis. The Jackson museum includes a mention of the nation’s slave past, but just that. It keeps its primary focus on detailing the valiant — and in this telling, triumphant — movement of resistance to racism of the 1950s and ’60s.

The Montgomery museum downplays this movement. The purpose here is not to tell a tale of progress, but to document and dramatize a continuing condition of race-based oppression, one that has changed form over time, but not substance. It’s both the back story and the front story; the constant one. At the beginning of the display, we see filmed recitations of slave narratives; later, recent video interviews with black death-row prisoners; and in between, early 20th century photos of bodies hanged, mutilated, burned.

The act of lynching was, by calculation, intensely visual. Its central, recurring image of controlling white bodies surrounding a tortured black one projected a message meant to grind a black population down with fear. As with all terrorism, unpredictability and arbitrariness were tactical tools. Lynching was intended to demonstrate that any black person, male or female, adult or child, could be accused of any offense and be ritually slaughtered. The law was no protection, and guilt was presumed, because being black was the real crime.

The Memorial for Peace and Justice presents this drama of intimidation with minimum documentation and detail and maximum sonority. Most other monuments in this monument-strewn city — the most visible being a 9-foot-high bronze statue of Jefferson Davis, the president of the Confederacy, in front of the Alabama State Capitol Building, — exist stylistically, no matter what their actual dates, in the 19th century. The roots of the Memorial for Peace and Justice lie in the post-utopian 1970s, in contemporary earth works and site-specific installations that combined Minimalist abstraction and scale with a Conceptualist capacity for political metaphor.

Most of the great commemorative works of the past several decades have a similar pedigree, from Maya Lin’s 1982 Vietnam Veterans Memorial in Washington, D.C., to Peter Eisenman’s 2005 Memorial to the Murdered Jews of Europe in Berlin. The Memorial for Peace and Justice shows the clear influence of both, and is a worthy addition to their company.

Installed on six acres of cleared land on a gently sloping hill overlooking downtown Montgomery, the memorial is in the form of an open-sided pavilion. (The design is credited to Mr. Stevenson and the Equal Justice Initiative working with MASS Design Group and several artists.) The landscaped site recalls the garden cemeteries of 19th-century America, which functioned as sculpture parks of mortuary art and meditative retreats. But it also brings to mind a gallows hill and Golgotha. Placidity is not, ultimately, the prevailing mood.

The first thing you encounter on the path to the pavilion is a bronze tableau by the Ghanaian artist Kwame Akoto-Bamfo of enslaved African men and women straining against their shackles in panicked alarm. On the far side of the pavilion is another sculpture, this one by the American artist Hank Willis Thomas, with several black men standing side by side, arms raised. In a victory salute? No. The image derives from a 1960s picture by the South African photographer Ernest Cole of miners being subjected to a humiliating group medical examination. In an American context the same figures suggest police suspects lined up at gunpoint.

The pavilion itself is a giant sculpture filled with smaller ones: more than 800 stele-like, 6-foot-tall rusted steel mini-monuments, some standing upright, others suspended. Each is inscribed with the name of a state and a county within that state (most are in the South), along with names (sometimes “Unknown”) of African-Americans lynched in that county.

The introductory grouping is so tight as to feel imprisoning. The standing monuments look like ranks of closed steel doors or staggered headstones, blocking movement. Then the pavilion floor begins to incline downward; and the monuments are suddenly presented in suspension, as if they were gradually lifting off from the ground, higher and higher the further you descend. Imagined as the bars of a rising portcullis, they imply release. But in a memorial about lynching they read another way, as a forest of hanging bodies. Eventually they’re so high that the inscribed names are unreadable, but reappear on the wall below in the jolting epitaphs:

Jack Turner was lynched in Butler, Alabama, in 1882 for organizing black voters in Choctaw County.

Jim Eastman was lynched in Brunswick, Tennessee, in 1887 for not allowing a white man to beat him in a fight.

Elizabeth Lawrence was lynched in Birmingham, Alabama, in 1933 for reprimanding white children who threw rocks at her.

Dozens of men, women, and children were lynched in a massacre in East St. Louis, Illinois, in 1917.

After Calvin Mike voted in Calhoun County, Georgia, in 1884, a white mob attacked and burned his home, lynching his elderly mother and his two young daughters, Emma and Lillie.

Again, this massing of hard, nerve-fraying fact makes clear that this monument is meant to perturb, not console, in contrast, say, to Montgomery’s official Civil Rights Memorial, a 1989 Maya Lin design located near the Southern Poverty Law Center, which soothes the visitor with resonant words and interactive contact with flowing water.

The Memorial for Peace and Justice has an interactive component too, but one that operates over time and distance. In an open area to the side of the pavilion lie duplicates of all the inscribed monuments. Stacked horizontally in rows, they look like coffins awaiting burial, or crates ready for shipment, and they are, indeed, available for distribution.

The Equal Justice Initiative has invited each county named on a monument in the pavilion to claim its duplicate and set it up in a public site on home turf, preferably at a spot where a lynching took place. The idea is both to spread the word about a suppressed history of racial terrorism, and to honor the victims of it. Whether the monuments will be adopted, and when, and by whom, remains to be seen. (So far, there have been inquiries, but no commitments.)

Together the individual and collective destinies of these markers — which ones stay unclaimed and which ones move on — will constitute an ethical narrative of its own. It’s one about the irresolvable tension between truth and reconciliation. And it’s about the human capacity to acknowledge evil — undeniable, preventable and present — or ignore it. Which means condone it.

The Times needs your voice. We welcome your on-topic commentary, criticism and expertise.

A version of this article appears in print on June 2, 2018, on Page AR1 of the New York edition with the headline: Remembering Lynching’s Toll. Order Reprints | Today’s Paper | Subscribe