By David Roberts@drvoxdavid@vox.com  Updated May 9, 2018

There’s been a string of stories in the past year or so about fatalities involving self-driving cars. The latest, from March, was about a pedestrian run down in Arizona by a self-driving Uber vehicle, which apparently saw her but deemed her a “false positive” (shudder).

Of course, as fans of the technology will rush to tell you, none of the vehicles involved were actually “self-driving” — they are vehicles with driver-assist features, which can take over for human drivers in limited circumstances. (Level 2 autonomy, in the jargon.)

The public, however, is unlikely to track such distinctions. The casual news consumer can be forgiven the impression that self-driving vehicles are being deployed, and killing people, at random — that we’re just winging it, using public streets as live experiments.  Predictably enough, there’s been blowback, leading Arizona to suspend its testing program (as has Toyota). It seems that simply tossing autonomous vehicles into the wild is not going to work.

A program in Texas aims for a gentler debut for AVs

Happily, a self-driving vehicle experiment planned for Texas shows a better and more realistic path to public acceptance.  A Silicon Valley startup called Drive.ai announced yesterday that it will launch a ride-hailing service using autonomous vehicles in Frisco, Texas, in July. It’s not the first company to offer such a service — there’s one in Phoenix, Arizona — but it’s the first one in Texas.

If you want a deep dive into the details, Cade Metz at the New York Times has one. I’ll just focus one aspect: the pains the program has taken to introduce autonomous vehicles in a safe and nonthreatening way, aimed at winning public support and growing incrementally.

If shared autonomous vehicles are going to catch on — if they’re going to ease congestion and eliminate parking like their enthusiastic fans promise — it’s not going to be through uncontrolled experiments on public roads. It’s going to look something like what Drive.ai is doing.

The key challenge for AVs is incremental introduction

As I’ve written before, autonomous vehicles have always faced a chicken-and-egg problem. If cities and infrastructure could be designed around autonomous vehicles (AVs), containing only AVs, the difficulties facing AVs would be negligible. All vehicles would be smart and would respond in standard, predictable ways to one another and to pedestrians.

But new cities are the exception. In most places, AVs will have to enter a market dominated by old infrastructure and human drivers. Those are enormous challenges, given their unpredictability and enormously variable features. (Pesky humans …)

The answer will be incrementalism in all aspects: in autonomy, range, scope, and usage. That’s the direction the Drive.ai pilot points; everything about it is geared toward slow, incremental introduction, focused on the comfort and confidence of the human beings involved.

To begin with, Drive.ai vehicles will operate only on fixed routes in a limited part of Frisco (a northern suburb of Dallas with 175,000 residents), which boasts wide streets, speed limits of under 45 mph, and an average of 230 sunny days a year. They will connect a Dallas Cowboys facility with two nearby retail and residential centers and be open only to the roughly 10,000 employees or residents of those buildings (for free, at least for the first six-month trial). The vehicles will stop at set pickup points.

The company is closely coordinating with the city and private partners to stay abreast of any construction or changes on the route.

Drive.ai’s passenger vans, modified Nissan NV200s, will be bright orange and clearly marked “self-driving.” (The bristling array of equipment on the roof, including multiple cameras, radar, and sensors that triangulate using pulses of light, is another clue.)

And here’s a cool twist: The vans will be able to communicate with pedestrians via LED screens on the front and both sides, which will feature messages like, I assume, “Out of my way, flesh sack.”

Initially, each van will have a human in the driver’s seat, ready to take over if needed. If the complexity of a situation overwhelms the vehicle’s ability to navigate it, it will ping the driver in. Over time, Drive.ai hopes to move to a “chaperone” in the passenger’s seat (mainly there to help the people using the service) and eventually to full autonomy.

AVs need to learn and they need to keep humans happy

The Drive.ai project has two features I think are going to be crucial to the successful introduction of AVs.  The first is a focus on deep learning. The chair of Drive.ai’s board is Andrew Ng, a legend in artificial intelligence and deep learning circles. He was a professor of computer science at Stanford, then directed the Stanford Artificial Intelligence Lab, then directed the Google Brain Deep Learning Project, then directed Baidu’s AI research, and so on. (Here’s his Medium post on Drive.ai’s debut.) 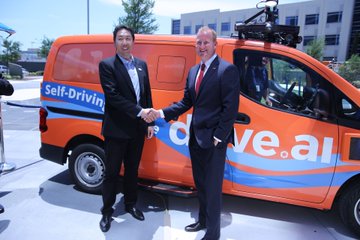 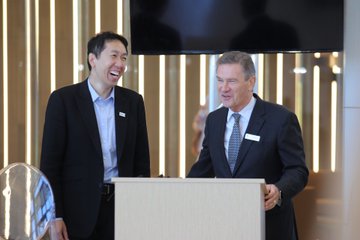 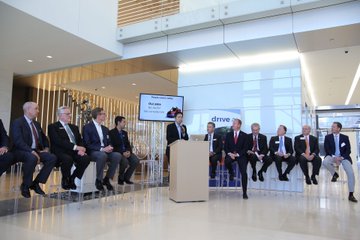 Self-driving cars are here. Thank you @CityOfFriscoTx, Frisco’s Mayor @JeffCheney, Frisco TMA, and @NCTCOGtrans Michael Morris for working with us! Link to my presentation from this morning: https://buff.ly/2jFwDDh

He’s helping the Drive.ai team, which came out of the Stanford lab, focus on deep learning, which means every vehicle will learn from every interaction and all incoming data and share what it learns with the rest of the fleet. In that way, the vans are meant to become more and more confident, not only in these particular routes but in the vagaries of human interaction generally.

In terms of deep learning, starting with a fixed, limited set of routes is like establishing a clean experiment. Complications, in the form of pedestrians, road features, or more congested routes, can be introduced in a deliberate, controlled way, allowing the scope of the program and its learning to rise together, incrementally. It can master one set of challenges before taking on more.

The second important feature is the focus on human-machine interaction (HMI — yes, there’s always an acronym). Drive.ai seems to be taking a broad view of HMI.

Narrowly, HMI involves interactions between vehicles and their passengers. More broadly, it involves the safe interaction of vehicles with pedestrians, cyclists, and other vehicles.

More broadly still, it involves the interaction of the ride-hailing system with the public and public institutions. That’s the part Silicon Valley types are not always the best at: getting buy-in and support from local officials, businesses, and civic groups, not by promising “disruption” but by offering a service that is tangible, useful, and safe.

If AVs are like a scary new species, the modest service Drive.ai is offering will effectively put them in a zoo, a “geofenced” area, rather than releasing them into the wild. Here’s how Ng puts it:

Self-driving cars have different strengths and weaknesses than human drivers. They are always attentive, have <100 ms reaction times, and have no blind spots. On the flip side, they don’t understand certain complex situations, such as a construction worker communicating using hand gestures. By choosing geofenced regions and working with partners, we can take advantage of self-driving cars’ strengths while diminishing their weaknesses.

If these first 10,000 AV users are excited about their new ability to hop from home to work to shopping without lugging a car around; if they are charmed on their evening walk when the van stops, makes some cute ding-dong noise, and says, “Go ahead and cross, friend!” on its LED; if they give glowing quotes to the journalists who are certain to be swarming the area — well, then, confidence will build. The service could add new routes and stops; it could start operating at night as well; it could open up to the public at large.

What’s likely, if the program succeeds, is that other cities will begin thinking about limited areas or routes of their own where AVs might prove useful — or even limited areas where all vehicles except AVs could be banned.

As that kind of thinking starts, it will be important for advocates of livable urbanism to engage, to make sure that AVs are used to enhance transit and multi-modal urban transportation systems, rather than seeking to replace them.

On that score, Drive.ai is saying all the right things. It will “aim to unlock access to areas underserved by traditional mass transit and improve connectivity to existing transit lines,” Ng writes. “Thoughtful self-driving deployments can increase mass transit ridership and reduce individual car usage, thus driving down a city’s transportation costs.”

Silicon Valley cynics (and who has better earned their cynicism?) may see this as lip service. But one way or another, autonomy is going to creep into the transportation system, likely through limited, geofenced programs like Drive.ai’s. Advocates for good urbanism would do well to engage with early experiments like this and try to guide them to uses that enhance urban livability rather than adding to urban congestion.

AVs won’t transform the transportation system in one big sci-fi flash. They will do so incrementally, step by step. It’s up to the rest of us to ensure that those steps move in the right direction.