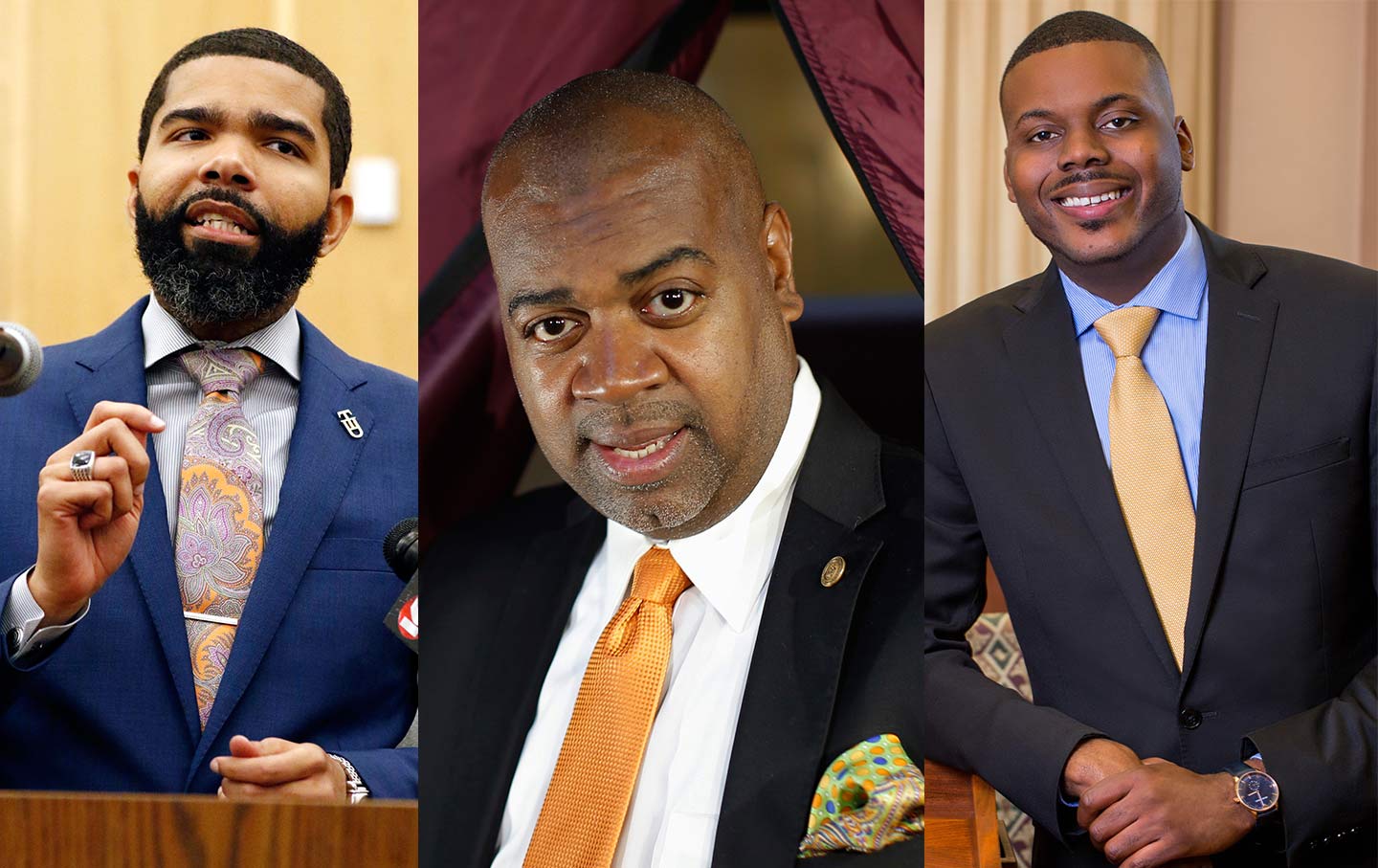 “It angers me how we keep going down the same path [with respect to policing] expecting a different result. We believe over-incarceration and over-policing leads to less crime, yet we have more crime,” Chokwe Lumumba, the mayor of Jackson, Mississippi, told me recently. Lumumba, elected last June with the endorsement of the political organization Our Revolution, added that his plans for criminal-justice reform are manifold; for instance, he supports a proposed ordinance to reduce penalties for marijuana possession in his city and a citizen-review board to assess complaints from the community.

Lumumba is one of several American mayors who intend to use their time in office to change the way the criminal-justice system functions. Ras Baraka, son of the late poet and playwright Amiri Baraka, was elected mayor of Newark, New Jersey, in 2014. In 2016, after a three-year federal investigation, the city entered into a consent decree with the federal government to improve its policing practices. Since Baraka took office, criminal-justice reform has been one of his top priorities. Behind a variety of initiatives is one core conviction: “Number one,” Baraka told me by phone, “is to make police understand that they’re part of the community and not occupying it.” To hold police officers accountable, his administration has created a civilian complaint review board and increased training for police officers to learn how to form better relationships with civilians. Part of that effort is “coffee with a cop,” in which officers go into communities with the express purpose of hearing the concerns of Newark residents, especially in neighborhoods that have been identified as “high crime” areas. During the holidays, police hand out toys to children. “We want to change the way people perceive the police and the way police perceive the community,” Baraka said.

In order to address over-incarceration, Baraka’s predecessor, Cory Booker, created an alternative to the traditional court system that can impose punishments other than fines or jail time. This “community court,” spearheaded by then-municipal judge Victoria Pratt, might impose community service, essay writing, or counseling on offenders who are charged with low-level misdemeanors, like marijuana possession or driving with a broken tail-light. Once he was mayor, Baraka appointed Pratt Newark’s chief judge. The motivation behind the community court, Baraka says, is to stop “the prison pipeline, divert [Newark residents] from incarceration, get them help and support they need to change their behavior.”

Another major initiative is a program to send members of a street team, trained residents from the community, into the field to resolve interpersonal conflict in order to prevent violence. “Over 60 percent of our violent crime is centered around personal conflict,” Baraka said. And the police department, he says, is committed to allowing the street team do its work. Often, Baraka said, the street team members find out that individuals in conflict need jobs, and the city workers then try to help them find one, in addition to helping de-escalate the conflict. “And police give them a certain amount of leeway to do that,” he said. “Ultimately we want to save lives. We’re not interested in just putting people in jail.” The program is still in its infancy, but has shown signs of success, Baraka says, and he is trying to get city funding to expand the program to more neighborhoods.

But not everyone agrees that Baraka’s administration has moved quickly and effectively enough to change policing practices. The Wall Street Journal recently reported that Newark’s court-appointed independent monitor, former New Jersey attorney general Peter Harvey, said in a progress report in January that Newark hadn’t provided sufficient officer training. Emily Turonis, from Ironbound Community Corporation, a neighborhood organization, told the Journal that “The [police] leadership is more open, but there’s a lack of ability to enforce it on the ground…. We’re still seeing the same problems.”

Michael Tubbs was elected mayor of Stockton, California, in November 2016. When he took office, the City was already in the process of rethinking its approach to policing. Stockton had reached a crisis in 2012, when the number of homicides there increased nearly 100 percent, Stockton’s per capita homicide rate surpassed Chicago’s, and Stockton became the largest municipality to file for bankruptcy. Now “our police department is on the cutting edge of a lot of [reform] work,” Tubbs told me. The city has committed itself to procedural justice, a practice that focuses on ensuring fair treatment of community members by police and legal authorities, and to additional mental-health training for police officers. Since 2017, the Stockton police department has been involved in “reconciliation sessions”—over 80 have taken place—with community groups enabling residents to discuss their experiences with law enforcement and build trust.

Choosing a police chief is one of the most consequential things a mayor concerned with criminal-justice reform can do. “The single-most-powerful tool a mayor has is the ability to elect a police chief,” said John Pfaff, a professor at Fordham Law School. In Jackson, that meant choosing a police chief who was not exclusively committed to existing conventions of policing. “In my discussions with the police chief, I was weighing [different] factors: The morale issues you deal with in law enforcement and a person’s ability and willingness and to learn new methods of policing,” Lumumba told me. “And so the gentleman we chose, not only was there for 34 years but was a criminal-justice professor and sincerely demonstrated a desire to learn more.” Lumumba explained that the interim police chief he’s selected, Anthony Moore, doesn’t accept the “practices of old to be gospel” and is willing to try new methods.

Mayors who seek to revamp criminal-justice policies and fight over-incarceration face a variety of hurdles, however. One is the extent to which the local economy may depend on over-policing. “If crime would stop tomorrow then the economy would fail,” said Lumumba. “We have more law enforcement than we’ve seen in history of the world…. So we have to find ways to substitute for that.” The local prosecutor may also pose problem. “The problem is that the prosecutor and attorney general’s office has a curious impact on police policy and police procedure,” Baraka said. Pfaff says that, a lot of the time, “mayors can be more sensitive to the concerns poorer more urban communities than prosecutors.” And that’s because local prosecutors are elected, most of the time, by the county as a whole, which in many cases can reflect a more conservative approach to law enforcement.

In Newark, says Baraka, prosecutors—who in New Jersey are appointed by the governor—are still sending too many Newark residents to prison. That means a reform-minded mayor needs to push sentencing reform on the state level. “We’re still advocating with our state legislature around sentencing reform, because the data shows that the folks being arrested, particularly in Newark, 90 percent of those people come back to the city,” he said. “Even after 15 years in prison.” And, they’re coming back, he says, with “less skills” or “no skills,” and are “more of a problem” than before they went away. Sentencing reform, he says, should be “centered around kind of shortening incarceration and bringing [offenders] home in supervised programs where they get training,” he said. The benefit is not just to the offender and the community, but also economic. “All of the dollars we’re spending to incarcerate people for 15 for 10 [years], if we shorten that and use the savings to invest in transitional or reform projects and alternative sentencing programs,” he said, “it would be more beneficial for us.”

When the goals of the mayor and the prosecutor are aligned, major policy shifts can happen. In Philadelphia, the election in November of self-described progressive Larry Krasner as district attorney has already helped to push forward a proposal for a safe-injection site, also supported by Mayor Jim Kenney. Safe-injection sites provide drug users with clean needles and monitoring. Such a program would be much harder to implement without a supportive prosecutor, but Krasner is on board. “We will make sure that idealistic medical students don’t get busted for saving lives and that other people who are trying to stop the spread of disease don’t get busted,” Krasner told NPR. Philadelphia will become the first city in the United States to offer safe-injection sites, which are popular in Europe and have been shown to be effective to reduce transmission of HIV and hepatitis, and reduce overdoses.

Mayors intent on criminal-justice reform also emphasize the link between crime and lack of economic opportunity. “Crime and poverty are intensely correlated,” said Michael Tubbs. He wants to address this issue by becoming the first mayor in the country to provide a universal basic income; right now a pilot project is providing a basic income to at least 100 people. Baraka argues that jobs would keep many Newark residents out of prison.

Pfaff agrees with these mayors that the crime rate and the economy are linked. “There’s a decent amount of evidence that [says] improving economic conditions reduces the volume of crime,” said Pfaff. But, he adds, it’s less clear that a strong economy leads to less incarceration. Declining crime doesn’t necessarily lead to fewer prisons, and in fact an improvement in economic conditions can make it easier for governments to punish since their budgets are bigger.

Mayors have leeway to ramp up criminalization, too, of course. Take, for example, San Diego, California, which has the fourth-largest homeless population in the country. Instead of creating long-term housing solutions, Mayor Kevin Faulconer has criminalized homelessness, said Michael McConnell, an advocate for the homeless and small-business owner in the city. After a Hepatitis A outbreak, arrests of homeless in the city’s downtown spiked. Last July, the city was sued for ticketing homeless people. According to The San Diego Union-Tribune, the city arrested 270 homeless people last September for “encroachment” or “illegal lodging,” which was three times the number from that same month in the previous year. “The mayor has decided that he’s going to make homelessness a law-enforcement issue, as opposed to a social issue,” said McConnell.

For progressives concerned about criminal-justice reform, it’s clear that mayoral elections are key. In the coming year, over 400 mayoral elections will be held. Yes, it’s important to focus on prosecutors, judges, and those elected to federal government. But a crop of reform-minded mayors has made it clear that mayors, too, can make major strides in addressing over-policing and over-incarceration.