In the lobby of the downtown branch of Toronto’s reference library, a bearded man in a red shirt doffed an imaginary top hat to wave me through the gate, bowing exaggeratedly and saying: “After you, madame.”

The building is unassuming at street level – brown brick, a grid of square windows – but pass through its doors and the white galleries billow upward like a hyper-intelligent car park flying through space.

In the reception, a poster reads “Newcomers to Canada Settlement Information”. Staff help new arrivals find information on citizenship, English and French classes, housing, employment and healthcare, as well as free guided tours of heritage sites across the city. A few steps away is the Innovation Hub, a “maker space” where a young woman explained to me how to use a 3D printer. This branch has three.

Public libraries throughout the western world are struggling. Britain has closed hundreds since 2010, reduced hours in others and replaced many paid librarians with volunteers. In Belgium, an advocacy group called Public Libraries 2020 aims to “challenge outdated perceptions” of libraries – in part by cajoling politicians to set foot inside one. In North America, staff per visitor has fallen across the board since 2012, and circulation and visits are dropping. The “disruption” of Silicon Valley – in which Uber replaces taxis, Airbnb replaces hotels and Netflix replaces video stores – has many governments asking: why pay for physical book repositories when you can get so much reading material online? 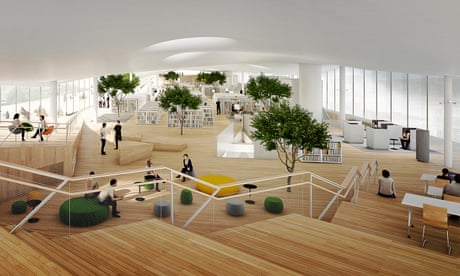 And yet researchers from Heinrich Heine University Düsseldorf have ranked Canada as having the best public library systems among 30 major cities studied. (All three Canadian cities included – Montreal, Toronto, and Vancouver – came in the top 10.)

You can see why. Readings and events at the 575-seat theatre at the Toronto reference branch are free, and you’d be well advised to book your ticket early: a recent appearance by Roxane Gay sold out in 88 seconds. Sensibly, the researchers also rated the libraries on the availability of snacks – behind me is a cafe with Balzac quotes on the walls and urns of Margaret Atwood-themed coffee. Not bad, though no match for Montreal’s Grande Bibliothèque, where you can get a risotto dinner with wine.

Given that books and articles can now often be accessed by other means, the Toronto Public Library network has tried to move beyond the original (but still significant) mandate of maintaining physical collections. It sees its relevance in providing programmes and services, as well as in facilitating free, or cheap, use of technologies that might otherwise only be available in exclusive spaces, such as art schools or science laboratories.

The Toronto reference library hosts Hand-a-thons, in which school groups use the 3D printers along with Arduino robotics kits to make working prosthetic hands. In the maker space a printing press, for self-publishing paperbacks, smells comfortingly of hot glue. There’s a podcasting studio and a green screen, where actors, models and real estate agents come to take headshots. A colleague is usually present to help answer questions about the scanners or photo suites, my guide explained, but right then he was setting up the VR superhero demo in the gallery.

“Access to information and pathways to learning were the great equalisers of the 20th century,” says Vickery Bowles, Toronto’s head librarian. “In the 21st century, we’re increasingly dependent on access to online services, and understanding of and comfort with that technology.”

Bowles sees a vital role of the public library in strengthening civic discourse and enabling political participation. Right now, the library is offering workshops on how to run for office or get involved in an election campaign (disclosure: I will be a paid panellist on a planned event in the library’s On Civil Society series). “We’re seeing more and more challenges to our democratic values and principles,” she says.

The TPL receives more 90% of its annual operating budget of $200m (£115m) from the city, with additional contributions from the province, and the institution has to be careful to refrain from appearing politically partisan. Recently the TPL has seen its provincial funding drop: last year, the Liberal government announced a $1.4m cut over two years. This year it planned a $51m investment over three years into regional libraries, as well as $28m over three years for a new Digital Public Library available to any Ontario resident. But the recent election of Doug Ford – the Progressive Conservative leader who once blasted Atwood over library funding and in 2011 said he’d close his local branch “in a heartbeat” – does not bode well.

Provincial funding aside, Bowles says the library will pursue further private-sector partnerships along the lines of their relationship with Cisco Canada, to continue providing cutting-edge technologies, and is confident of entering talks with Sidewalk Labs, the Alphabet subsidiary, should plans proceed for its city-within-a-city on Toronto’s waterfront.

When I left the library and descended into the subway, I saw the bearded man who had waved me through the gate. Now he was pacing the platform. He nodded when he passed me, saying quietly, “library?” I nodded back. We recognised each other from one of the city’s least exclusive clubs, a place where the main criterion for belonging is wanting to.