“Swirling in the air here in Davos at the World Economic Forum, along with snowflakes, was an important discussion of how companies must do far more to benefit the 99 percent, not just the 1 percent. Enriching shareholders is not enough. Tycoons always claim to cherish ordinary people’s best interests even as they rip them off. American tobacco executives have killed more people than Stalin managed to, and pharma executives recklessly peddling opioids may have killed as many people as Colombian drug lords, yet these business leaders sometimes seem to get moist-eyed describing the work they do.”

From Nicholas Kristof, 24 Jan 2018 in the NYTimes.com, Davos 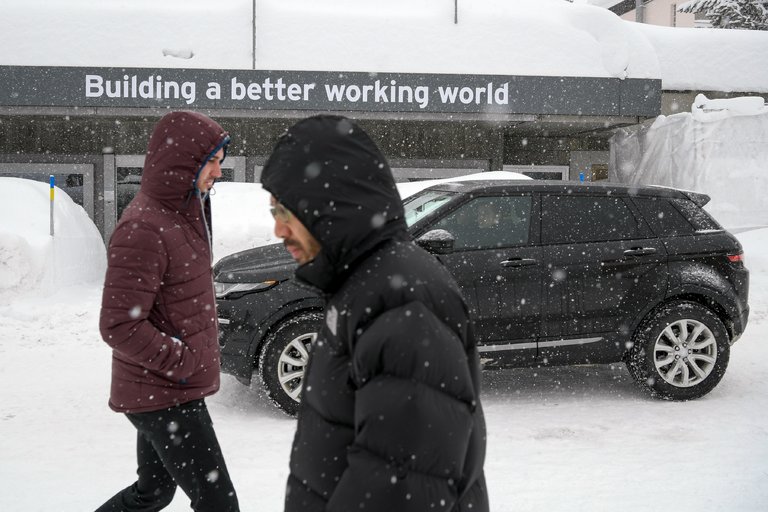 Not everything about the World Economic Forum in Davos is about globalism and the power elite.CreditFabrice Coffrini/Agence France-Presse — Getty Images

DAVOS, Switzerland — When I visit university campuses, I’m periodically asked if students who seek jobs in the business world are immoral, money-grubbing sellouts.

I don’t think they are, for businesses can be a hugely important force for progress. Can be, but usually aren’t. Swirling in the air here in Davos at the World Economic Forum, along with snowflakes, is an important discussion of how companies must do far more to benefit the 99 percent, not just the 1 percent. Enriching shareholders is not enough.

We interrupt this column for a paragraph of cynicism. Tycoons always claim to cherish ordinary people’s best interests even as they rip them off. American tobacco executives have killed more people than Stalin managed to, and pharma executives recklessly peddling opioids may have killed as many people as Colombian drug lords, yet these business leaders sometimes seem to get moist-eyed describing the work they do.

But the business toolbox is too important to give up on. To me, the most interesting people in Davos aren’t the presidents or celebrities, but the social entrepreneurs — those using business tools to address social problems — and their work offers an inspiring window into what can be accomplished.

Christopher Mikkelsen works with two dozen companies, including cellphone operators and Facebook, to help refugees find lost members of their families. His organization, Refunite, once helped two Congolese sisters find each other after 16 years; they turned out to be living just a few miles apart in Nairobi.

Refunite is now helping more than one million refugees search for missing family members. It has already helped 40,000 of them connect, and Mikkelsen says this would never be possible if it were just an aid group rather than a hybrid piggybacking on business networks.

Sasha Kramer works in Haiti to address two fundamental problems: a lack of toilets and declining soil fertility. Her organization, SOIL, charges customers a few dollars a month to provide and service composting toilets that turn human waste into safe agricultural fertilizer. The cost is one-third of what a sewage system would cost to operate.

With water shortages around the world, there’s growing interest in that approach, so Haiti may become a model for other nations in the developing world.

In Kenya, Christie Peacock tackles a huge problem for farmers: Much of the feed, medicine and other agricultural supplies for sale are fake or substandard, including about 60 percent of the fertilizer. When farmers buy fake seeds, their crops fail, and they go hungry.

Peacock previously worked in the aid world, but, she says, “I got disillusioned with the NGO model,” so her company, Sidai, is a for-profit venture founded with start-up capital from the Bill and Melinda Gates Foundation. It now serves 200,000 Kenyan farmers.

That’s the advantage of a business approach: It is often more sustainable and scalable than a charity. By working with African farmers to improve coffee production, Starbucks helps lift more people out of poverty than any number of aid efforts.

Among the giant corporations, there’s at least more of the right kind of talk. Laurence Fink, the chief executive of the investment firm BlackRock and one of the biggest investors in the world, shook the business world last week with an implicit threat to punish small-minded companies that “only deliver financial performance” without “a positive contribution to society.”

What’s driving the rethink isn’t a tingling of the tycoon conscience but brutal self-interest. Millennials want to work for ethical companies, patronize brands that make them feel good and invest in socially responsible companies.

Some of this is shallow and some is deep, but it’s authentic: Doing good is no longer a matter of writing a few checks at the end of the year, as it was for my generation; for many young people, it’s an ethos that governs where they work, shop and invest.

C.E.O.s tell me that this forces their hand. If companies protect groping scumbags, that hurts recruitment and they lose in the war for talent. Increasingly, a company that ignores social value loses shareholder value.

I believe the best industries for doing good are law (pro bono work) and certain pharmaceuticals (drug donation programs). That’s because they are held accountable by metrics: Big law firms are ranked by American Lawyer for their pro bono work (Jenner & Block is top of the list), and pharma donations are rated by the Access to Medicines Index (GSK is No. 1).

Other companies hailed as model global citizens include Unilever, Starbucks, Whole Foods, Mastercard, Danone and Chobani. (What is it with yogurt companies? Their culture?)

When companies with hundreds of thousands of employees elevate women, fight for Dreamers, adopt environment-friendly packaging, when they serve not only shareholders but also the larger society, the impact can be transformational. But enough with the gauzy rhetoric. It’s time for businesses to walk the talk.