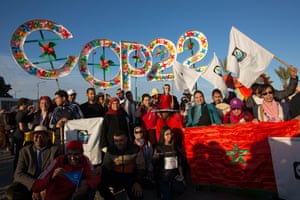 The climate march at the COP22 climate conference in in Marrakech, Morocco. Photograph: Jeremy Sutton-Hibbert/Greenpeace

Some of the world’s poorest countries have pledged to dramatically cut their carbon emissions and rapidly move to 100% renewable power, as the UN climate summit in Marrakech drew to a close on Friday.  The announcement followed a final declaration by nearly 200 nations affirming their “highest political commitment” to combatting climate change, in a thinly-coded warning to the incoming US president.

But the talks ended with what the outgoing president of the conference, Salaheddine Mezouar, called a developing emergency over climate finance.  After bilateral talks with the UK and US, Mezouar, who is also Morocco’s foreign minister, said: “It is a priority of this COP22 presidency to mobilise finance as this is really becoming a necessity and an emergency.”

The Organisation for Economic Co-operation and Development’s (OECD) projections suggest that developed countries will have stumped up just one-fifth of the initial amount needed for a $100bn-a-year global climate fund which is due to launch in 2020.

A UN source insisted that the $100bn target would be met by 2020 but said trillions would be needed for development to be made more sustainable. “The question is: how are governments going to change the whole financial structure on this planet to get these big sums going?”

Despite the huge challenges involved, some 48 nations on the climate change front line pledged on Friday to produce tougher carbon targets within four years, and rapidly switch to 100% renewable energy production.

Bangladesh, Ethiopia and the Philippines were among the countries to promise that they would now file plans for becoming net zero-carbon societies by mid-century, in line with the Paris deal’s aspiration of limiting global warming to 1.5C.

Al Gore, the former US vice-president, described the announcement as “a bold vision that sets the pace for the world’s efforts to implement the Paris agreement. These ambitious and inspiring commitments show the path forward for others and give us all renewed optimism that we are going to meet the challenge before us and meet it in time.”

Mohamed Adow, Christian Aid’s climate spokesman, said: “It is moving to see, that despite their relative poverty, the world’s most vulnerable countries leading the world in delivering the goals of the Paris agreement. They may be relatively small in size but these countries have become titans in the world of climate leadership.”

The summit made limited headway on other key issues, ranging from the accord’s rulebook to a 2018 review that could strengthen carbon targets to bring them more in line with the science.

Crucially, just $165m of new money was pledged by advanced economies for the Green Climate Fund which enabled poorer countries to sign up to the Paris agreement.

“It is very, very worrisome,” Tosi Mpanu Mpanu, chair of the Least Developed Countries group, told the Guardian. “If you have to make agriculture resilient, build a sea wall or ensure that diseases don’t spread, there is no money-making rationale behind it. That is why public money is needed.”

The EU had originally expected a third of the world’s climate fund to come from public monies but that percentage has fallen in a time of austerity-squeezed budgets.

“Unfortunately, at this stage it is all about climate finance which is calculated using creative accounting, and methodologies that were not agreed upon and are not conductive to building trust,” Mpanu Mpanu said.

The US has so far only delivered around $500m of a promised $3bn donation to the global climate fund, and little more is expected under a Trump administration. HSBC said that it expects imminent decisions on climate finance contributions to force clarity early in Trump’s term on his campaign promise to withdraw from the Paris agreement.

Asked by the Guardian whether the US could provide an emergency fast-tracking of funds before 20 January when Trump takes office, Jonathan Pershing, the US special envoy on climate change, said that it would be premature to speculate on the president elect’s actions in office.

But he added: “We believe that this is an essential part of the movement forward and there will therefore be substantial value for US citizens and taxpayers in addressing these questions and providing technical support.”