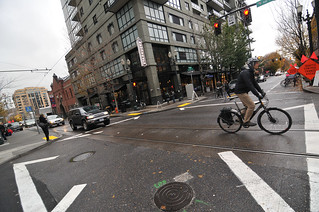 When it comes to planning a city, trips matter. Estimates about the amount of trips generated by a transportation project or new development are what dictate not just what our redesigned streets will look like, but also how we pay for them.

One of the ways the City of Portland pays for infrastructure is by charging developers a fee based on the impact their new building will have on the transportation system. These fees — known as Transportation System Development Charges, or just TSDCs for short — are based on a model that estimates how many trips a new development will generate.

There’s just one small problem: The methodology is centered almost exclusively around cars. The Portland Bureau of Transportation wants to change that.

At City Council today commissioners unanimously passed an ordinance (PDF) allowing PBOT to use a methodology that uses “person trips” – meaning trips made not just by people in cars and trucks but also foot, by bike and in transit vehicles.

Brian Davis, a transportation analyst at Lancaster Engineering, said the methodology Portland currently uses is based on the Institute of Transportation Engineers (ITE) Trip Generation Manual which he calls, “very car-oriented.” “All our land-use and transportation planning is based on this manual which relies on data collected in suburbs in the 80s and 90s.” Therefore the data, Davis says, “Is massively overstating the number of car trips a development will result in.”

“If you’re just planning for cars than we’ll only have a system for cars.”
— Kelly Clifton, the Transportation Research and Education Center (TREC) at PSU

This matters because the car-oriented data tells engineers and planners that intersections have to be wider, parking lots have to be bigger, and so on. And if a city doesn’t do what the manual says, they can be open to lawsuits.

On the TSDC side of things, the ordinance comes as PBOT is updating how they set the fees and what types of projects they should fund. At Council today PBOT’s Christine Leon said the new methodology would set the city on a course to use a person-first trip generation methodology as the basis of their TSDC program. She brought in noted Portland State University researcher Kelly Clifton. Clifton told Mayor Charlie Hales and city commissioners that the idea is to, “Put people at the center of our planning universe.” “People make trips,” she said, “Not just cars.”

Clifton also pointed out that the existing methods based on cars and suburban land-uses, “Have contributed to the marginalization of other modes.” “If you’re just planning for cars,” she said, “Than we’ll only have a system for cars. We need to have our methods be commensurate with our goals.”

The new methodology is an exciting step that could have implications for Portland transportation planning well beyond fees we charge developers. The idea of person trips is closely related to the road capacity concept known as “level of service”. That methodology is very car-centric and has vast ramifications for infrastructure projects. If we begin to quantify road users as people doing a variety of things — not just driving a car — than we can start looking at a multi-modal level of service and begin planning for the city we want.

With passage of the ordinance PBOT can now further refine the tool. They will return to council with an update in mid-2017. Learn more about the TSDC update on the city’s website and stay tuned for opportunities to weigh in.

BikePortland is supported by the community (that means you!). Please become a subscriber or make a donation today.