States are imposing fees on the small population of EV drivers in a broader push to shore up road repairs.

The gas tax is catching up to electric vehicles in a growing number of states.

Several states have passed or enacted new fees this year, bringing the total to 13, CNBC reported. Recent additions include West Virginia, Michigan, Minnesota and California, which is home to leading EV maker Tesla and a suite of policies designed to incentivize electric-car adoption.

The fees are often developed as a means to pay for transportation infrastructure, which has traditionally been supplied by a gas tax. Gasoline purchases serve as an imperfect proxy for wear and tear on the roads, however, because new vehicles have been trending more efficient, and electric vehicles have abandoned gas as a fuel for propulsion entirely.

Some states, including Vermont and Oregon, are considering a fee based on vehicle miles traveled, rather than fuel type. But that model has yet to catch on.

The California infrastructure plan passed in April raised the gas tax for the first time in 23 years, bringing the base tax to $0.30. It also imposed an annual $100 fee on electric vehicles starting in 2020. The deal is expected to raise $5.2 billion annually to fund roads, bridges, highways and mass transit projects.

The U.S. consumed approximately 656 gallons of fuel per driver in 2015. For drivers hitting that level of consumption, a $100 EV fee costs about half as much as a $0.30 per gallon tax. That said, a flat fee hits drivers equally, whether they drive sparingly or all the time.

The new fee also adds additional cost to a product that has yet to reach mass-market scale.

California recognizes EV adoption as a policy goal in line with cleaner air and reduced greenhouse gas emissions. Governor Jerry Brown has called for 1.5 million EVs on the road by 2025, but while it leads the nation, the state only has 300,000 plug-in cars so far. It has tried to sweeten the deal with a $2,500 rebate and HOV lane access for plug-in electric cars, and even bigger incentives are working their way through the state legislature.

Now, the state will hand out money to people who buy EVs, and then take some back each year that they drive them.

It’s not yet clear what impact the fees will have on the purchase of electric vehicles. A fee of $100 per year is a small amount compared to the sticker price of a Tesla Model X. And a customer debating between a Chevy Cruze and a Chevy Bolt would have to pay for roads and bridges either way.

The ongoing declines in lithium-ion battery pricing will register more visibly on the affordability of these vehicles. Meanwhile, the number of available models is consistently expanding.

A handy GIF from Bloomberg New Energy Finance charts the proliferation of models and miles of range from 2008 to 2020. AutoGuide.com also released a list this week of all currently available EVs.

In a sign of the times, Swedish carmaker Volvo announced today that it will phase out the internal combustion engine and only sell electric or hybrid cars starting in 2019. It is the first automaker to do so.

As EV adoption grows, more jurisdictions may follow with their own fees for use of the roads. This could signal an evolution for the cars — from a new invention that states want to encourage to just another type of car that will be taxed to keep the roads in good shape. The key will be getting the timing and policies right, so the new fees don’t completely deter adoption.

“We see this as a concerning trend,” Gina Coplon-Newfield, director of the electric vehicles initiative at the Sierra Club, told CNBC. “We certainly want to see funding raised to support roads and bridges and transit. […] But penalizing electric vehicle drivers is not the way to solve this problem.”

In addition to the fees, seven states have eliminated rebates for buying an EV, according to the Sierra Club. In Georgia, EV sales plummeted in 2015 after the state repealed its incentive program — a tax credit of up to $5,000 for an EV purchase — and hit drivers with a $200 annual user fee.

A recent study commissioned by the Southern Alliance for Clean Energy determined that Georgia would benefit from reintroducing a tax credit and lowering the user fee. Approving a new $2,500 tax credit, combined with a $100 user fee, would produce nearly 1,000 full-time jobs, $100 million in gains to the state’s GDP and $54 million in increased income, the study concluded.

“Remember, Georgia has no oil wells and Georgia has no refineries,” Georgia Public Service Commissioner Tim Echols told Savannah Now. “Our money’s going out of state on any kind of gasoline or petroleum product. Each pure electric vehicle purchased keeps $2,240 annually in the state by fueling with electricity.”

Echols predicted lawmakers would bring back the EV incentive, albeit a lower-value one, in the 2018 legislative session.

It’s worth noting that several other states and cities, including New York, Utah and Rhode Island, have recently created new incentives for the purchase of plug-in cars.

Annual State Fees for EV Owners as of September 2015 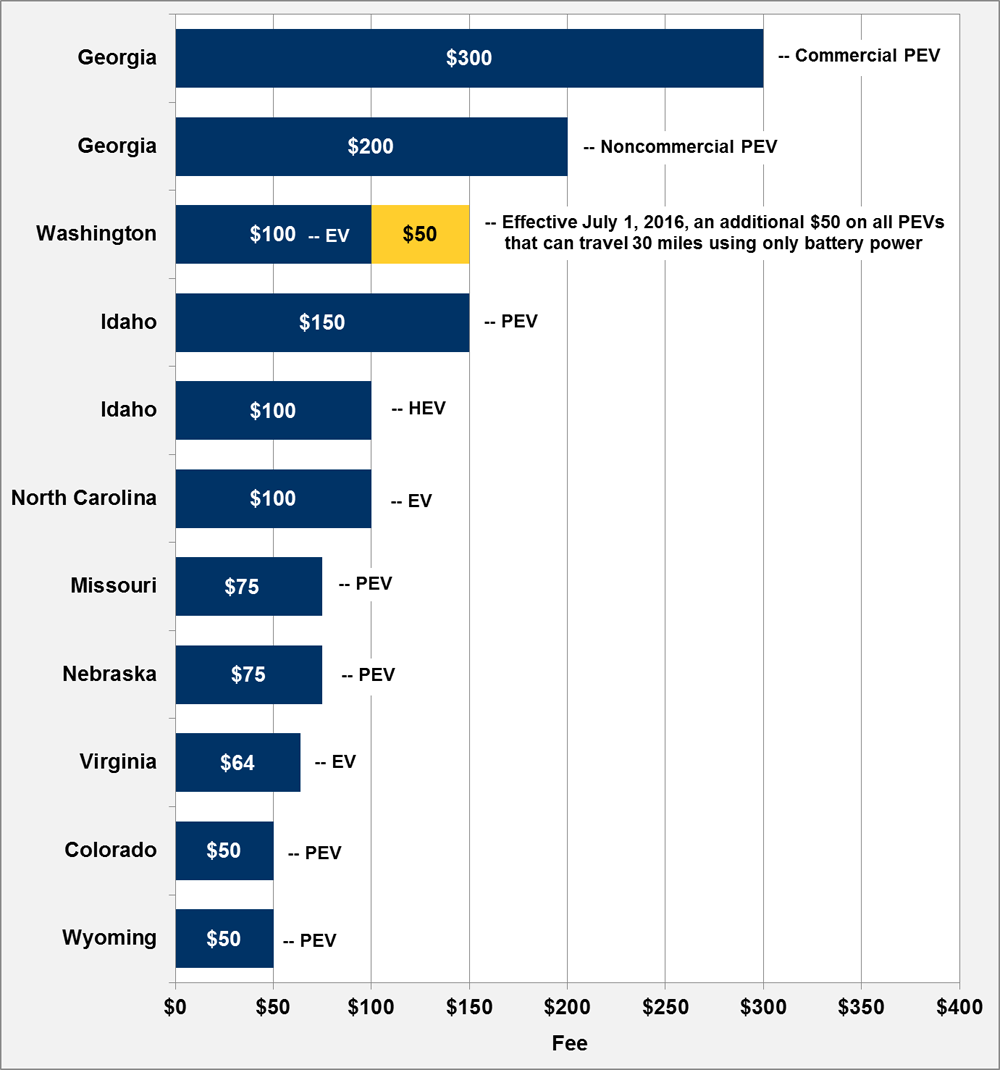 In an important real-world test of whether electric vehicles could play a bigger role in backing up the green power grid of the future, a group of San Francisco-area drivers showed that they were willing and even eager to adjust their charging times for the right financial incentives.

The small but sophisticated pilot test that took place over 18 months. During that time, BMW asked owners of its electric cars if they would be willing to delay recharging them by an hour on the company’s cue.

An app notified the owners when a delay was coming, and they could opt out if they needed to charge at that time.

“Eighteen months later, I can unequivocally state that participation was transparent, hassle-free and mind-numbingly dull to the point that I mostly forgot about it,” one participant, John Higham, wrote in a first person account of his experience for Inside EVs.

The trial led BMW and Pacific Gas & Electric (PG&E), the utility for Northern California, to suggest that if electric vehicles become as popular as expected, electric vehicle demand management could become a powerful tool for supporting grid flexibility.

“The overall lesson is we can use resources likes electric vehicles to help support the grid during times of peak use,” said Ari Vanrenen, a spokesman for PG&E.

Renewable energy experts have long held the theory that electric vehicles will play a momentous role in helping the electric grid be more flexible. EVs could be deployed to buffer uneven power generation of wind and solar. Owners might, for example, wait to charge their cars until the height of the day, when solar is most plentiful and cheapest. Or, they might delay their charging during peak hours in the early evening, when the grid is under the most stress.

As of now, customer sensitivity to prices is still an unknown quantity. While the BMW-PG&E partnership tested only whether customers would agree to delay their demand by an hour if given a financial incentive, it offered some concrete evidence that influencing customer behavior is possible.

For the test, PG&E asked BMW to build a system that could remove 100 kilowatts of demand from the grid on short notice.

PG&E could make the call at a random time. Of particular interest to the utility was whether demand could eventually be decreased during peak load hours of 4 p.m. to 7 p.m., when solar power is waning for the day and demand on the grid ramps up.

BMW’s app would signal to customers that a one-hour delay was coming. If the car was connected to a charging station at that time, BMW could trigger the charging delay through software in the vehicle. Participants were paid $1,000 up front to participate in the study and $540 more depending on how many times their vehicle participated in the request for a one-hour delay.

If BMW could not meet the power reduction goal through delaying customer charging, it was encouraged to supply the necessary charging through its own battery storage center.

Throughout the 18-month test period, which ended in December 2016, customers were asked to delay 209 times. BMW was able to meet its obligations to reduce power about 90 percent of the time, however only 20 percent came from owner demand reduction and 80 percent come from BMW’s battery storage.

The Challenge of Charging Times

While that seems far from conclusive, the results have to be seen in the context of a small pool of drivers whose vehicles would have to be connected to a charging station when the request came in. BMW found an average of only about seven of the nearly 100 cars involved were typically available to participate when a reduction request was announced. A lack of EV charging at work lowered the numbers.

If the time of the request came between 11 p.m. and 2 a.m., when cars were more likely to be plugged into their home charging stations, vehicle owners were much more likely to participate in the delay.

Since 93 percent of the participants stated that they liked the program and would be willing to participate in a similar program going forward, PG&E said it was eager to conduct a larger second phase. The California Energy Commission has given BMW a grant to lead that second phase with support from PG&E that has already begun.

As more and more EVs hit the road, programs like this have broad promise, the companies said.

“We can extrapolate to the future likely load reduction from plug-in vehicle drivers, as EV adoption increases,” said Rebecca Kiehne, a spokesman for BMW North America. “If we assume 20 percent of all existing EV owners enroll in a similar program, and behave similarly, a single future event might result in a load drop big enough to power approximately 58,000 homes in California.”