Is the US on the cusp of a clean energy revolution that will fundamentally change how we live, work, and get around?

That’s exactly what entrepreneur and lecturer Tony Seba argues in his book, Clean Disruption of Energy and Transportation. His multi-pronged predictions include: all new energy will be provided by solar or wind, all new mass-market vehicles will be electric, and all of these vehicles will be self-driving or semi-autonomous — by 2030, or maybe sooner.

Seba explained his breathtaking vision in a recent conversation with John Farrell, who leads the Energy Democracy Initiative at the Institute for Local Self-Reliance. He pointed to a series of factors, including falling energy storage costs and fast-moving innovation in the auto and renewables industries, that he says will reinvent day-to-day life in America.

Note: We published this podcast and post alongside a new, comprehensive report — Choosing the Electric Avenue — Unlocking Savings, Emissions Reductions, and Community Benefits of Electric Vehicles — that explores in-depth the influence electric vehicles can have in building clean energy economies at the community scale.

Seba’s forecast is a lofty forecast, but he insists this kind of upheaval isn’t new — there’s a clear formula for getting there. Just think of the smartphone. 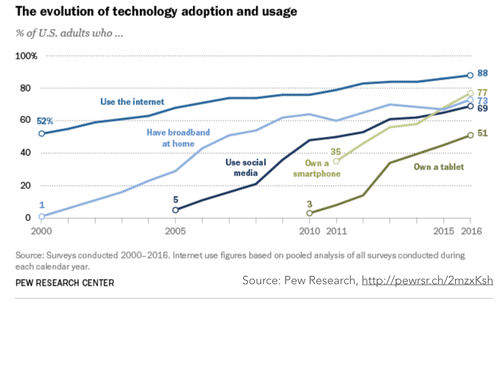 A decade ago, iPhone and Android devices met with skepticism when they made their debuts. The market hadn’t seen multifunctional devices like them, and they came at a premium price. But over time, smartphones proved their value and found their way into average consumers’ hands. Prices dropped, and slow-moving competitors suffered. In the end, iPhone and Android spurred a total market disruption.

Now, the electric vehicle industry is on a similar trajectory, in the early stages of a new market transformation. The same is true for power delivery, and electric utilities — notoriously averse to shifting market dynamics — face an existential crisis if they refuse to adapt.

“Disruptions happen from the outside,” Seba said. “Usually incumbents either don’t see their disruption coming or they don’t see it coming quickly. They usually deny it ‘til it’s too late for them to do anything about it.”

At the crux of this budding revolution are the benefits electric vehicles offer compared with their gas-powered counterparts, and consumers are beginning to bite.

Tesla, the pioneering luxury electric vehicle maker, reported a year ago that roughly 400,000 people had put down a non-refundable $1,000 deposit on its forthcoming Model 3, considered its first “affordable” car.

Tesla’s brand has a certain cachet that puts it at the forefront of the conversation, but electric vehicles in general are becoming more popular as battery costs decline and they can travel farther between charges. Electric vehicle technology now outstrips internal combustion engines on a number of fronts, Seba said, amping up their appeal.

For one, the electric motor lasts substantially longer — it can handle 1 million miles versus the 200,000 for an internal combustion engine, he said. They are substantially cheaper to run on a per-mile basis and generally see lower maintenance costs (see the chart below from our new report). At the same time, they can store energy to power drivers’ homes (and vice versa), an impossibility for traditional cars. 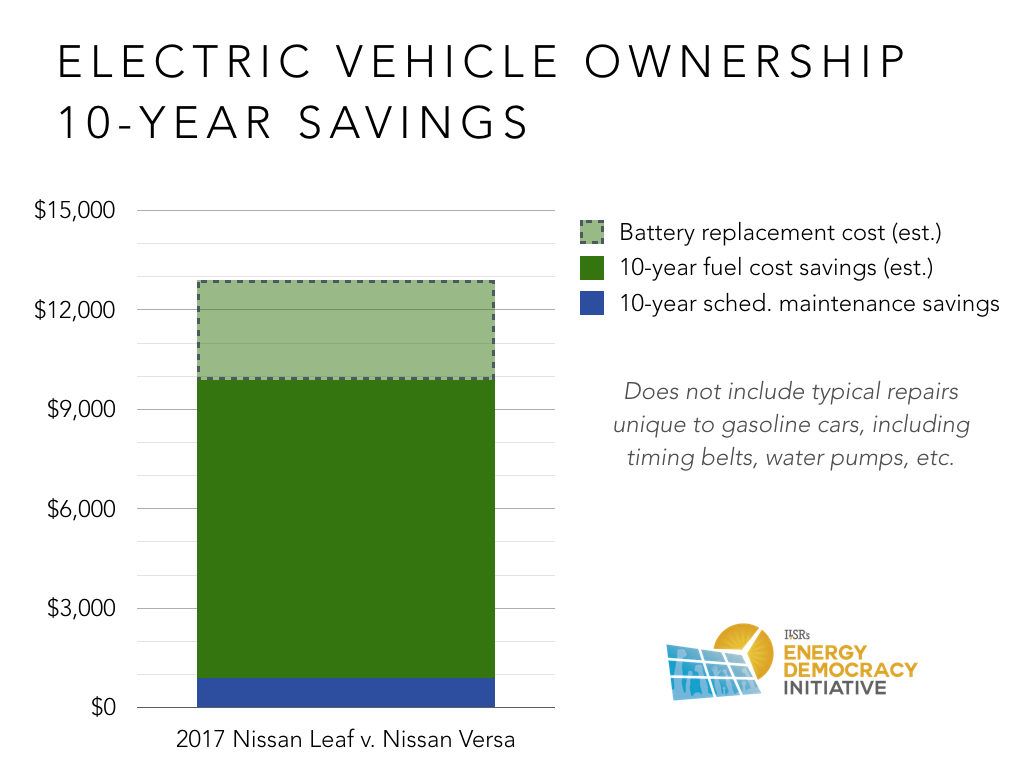 From where Seba sits, the demonstrated advantages of an electric vehicle increasingly overpower skepticism of them.

Utilities Staring Down an Existential Crisis

The momentum propelling electric vehicle innovation coincides with shifts in the electric industry at large. The traditional utility business model — a one-way power delivery system whose financial success depends on expensive infrastructure and electricity sales — is buckling under pressure from consumers prioritizing renewables and energy efficiency.

The falling cost of solar, which like electric vehicle batteries has been on a sharp decline for years, means the cost of on-site power generation increasingly competes with power delivered by the utility. Continued drops in solar materials and installation costs will open that opportunity to more consumers, underscoring the economic case for utilities to better accommodate solar. 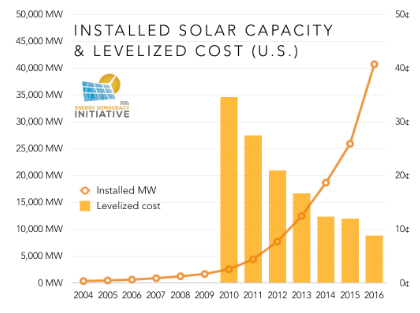 By Seba’s calculations, the per-watt cost of solar has plunged from $100 when the technology was new in 1970 to just 33 cents per watt today. During the same span, he found the costs of other energy sources — coal, oil, nuclear power, and natural gas — swelled by at least six times, and as much as 16 times.

Ongoing work to refine solar panels has made them cheaper — every time the base of installed solar doubles, the cost of the panels drops by nearly a quarter, he estimated. Today, the panels are among the least expensive parts of putting solar on a rooftop. Soft costs, like for permitting and interest on financing, both contribute more to the overall price tag, underscoring the impact of improvements to the manufacturing process.

As lower prices push solar further out into the marketplace, those other costs are also poised to fall, Seba said. Eventually, rooftop solar will be a no-brainer for people building a new home or replacing their roofs. In addition, Seba said, it’s only a matter of time before more affordable storage increases the value proposition of on-site generation.

“The cost of a solar rooftop is going to be at the same level or even cheaper than the cost of an asphalt roof,” he said. “At that point, essentially you have free solar or even negative-cost solar and that day is not too far away.”

Automotive and electric utility stalwarts have largely sidestepped the competitive concerns that loom as consumers clamor for new options. Car makers, whose bottom lines center on after-market expenses like maintenance, have plenty to lose. So do utilities, whose long-held monopoly status is threatened by customers who can increasingly choose to generate their own power.

“They are in danger of being disrupted…Tesla and other electric vehicle companies…have nothing to lose,” said Seba.

Rather than adjust their outdated business models, industry titans have dug in their heels. Electric utilities, for example, have leaned on legislators and regulators to enact policies designed to diminish the financial feasibility of rooftop solar and other distributed generation.

A particularly egregious coalition of Florida utility interests last year spent more than $20 million on a campaign to pass a constitutional amendment, disguised as a pro-consumer choice measure, that in reality would have curbed solar growth in the Sunshine State. Voters ultimately struck down that proposal, but fee hikes and unfair solar compensation schemes loom nationwide.

The strategy might slow progress in the short term, but Seba predicts it won’t be effective for long. Within a few years, he said, distributed solar will simply be too good a deal for consumers to pass up.

“Utilities have been monopolies for 100 years. Edison and Tesla would know a utility today…they have been able to maintain very, very inefficient economic system because they are rewarded by their capital expenditures. …They have had no incentive to make make electricity cheaper and less wasteful. When you get new companies coming in from the outside – solar companies and battery companies and so on – who have nothing to lose and everything to gain and who are competitive, the monopolies have no chance. … Today’s solar is cheaper than what utilities sell to us in hundreds of markets around the world, and that is why solar is accelerating — because millions of consumers are making the economically rational choice, which is to go with solar,” Seba said. “By about 2020, essentially solar plus storage is going to become cheaper than the cost of transmission.”

Even as more Americans cozy up to the idea of generating their own power for their homes, businesses, and cars, not everyone will go totally off-grid. The idea of this mass “grid defection” has been overblown, Seba said. Many people — including renters or households with imperfect rooftop conditions — simply can’t install on-site solar. Others who can are unable to generate enough power on their own to go completely off-grid.

Still, while the utilities will retain a significant portion of their customer base in the long term, that doesn’t mean the existing approach to electric and transportation infrastructure will cut it. Electric vehicles and distributed renewables are both fundamentally incompatible with the aging systems in place today. And both are expected to grow exponentially in coming years.

So what does that mean for the electricity system, including electrified transportation? To Seba, the future looks like a “Internet of energy.” Households, businesses, and municipal facilities will generate their own power, which then can store, manage, and sell to other users.

As the price of electricity goes down, the value of this community-oriented distribution will be rise. Falling electricity prices suggest an uptick in demand, spotlighting the need for a robust network that enables various on-site producers to efficiently and effectively spread their power around, Seba said.

We’d like to think that Seba is describing ILSR’s vision of a transition to from energy monopoly to energy democracy, shown below. 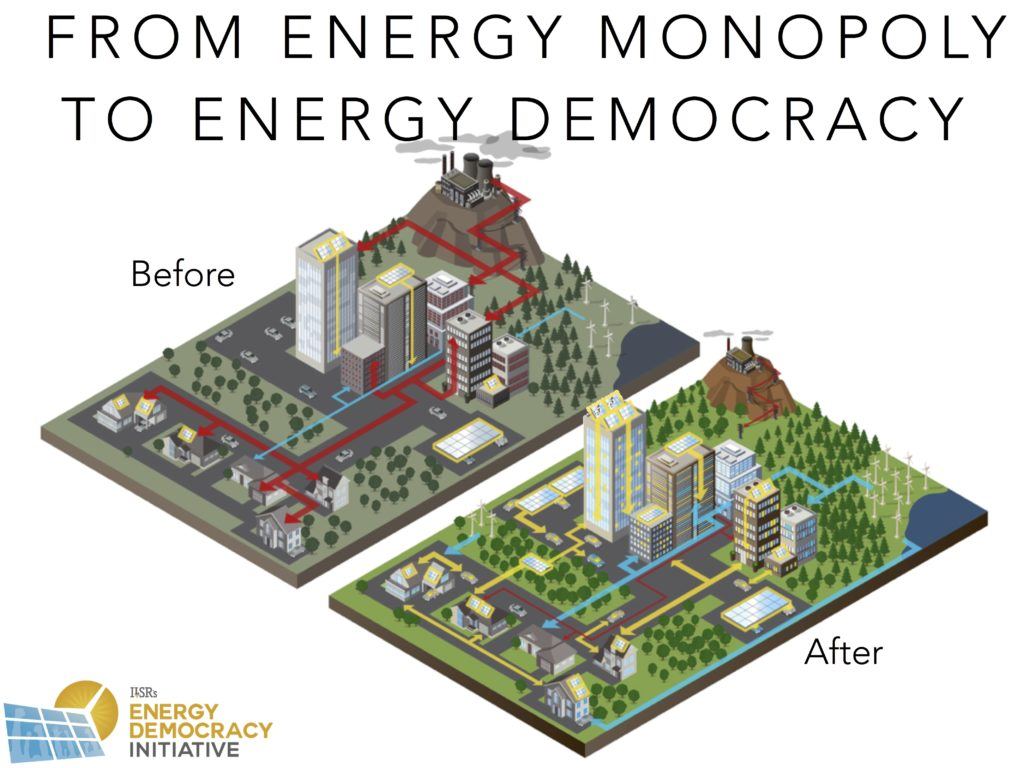 For timely updates, follow John Farrell or Karlee Weinmann on Twitter or get the Energy Democracy weekly update.