It seems that all the news coming out of CES is about self-driving cars or autonomous vehicles (AVs), how everybody is working on them, and how they will make the world safe for them. But we have other options and other choices, and perhaps people should step back and think again about what kind of future we want. In a post last year I noted that we are not giving nearly enough attention to bikes and in particular, the rapid expansion of e-bikes, and quoted analyst Horace Dediu, who was covered in CNN:

Dediu argues that electric, connected bikes will arrive en masse before autonomous, electric cars. Riders will barely have to pedal as they whiz down streets once congested with cars. 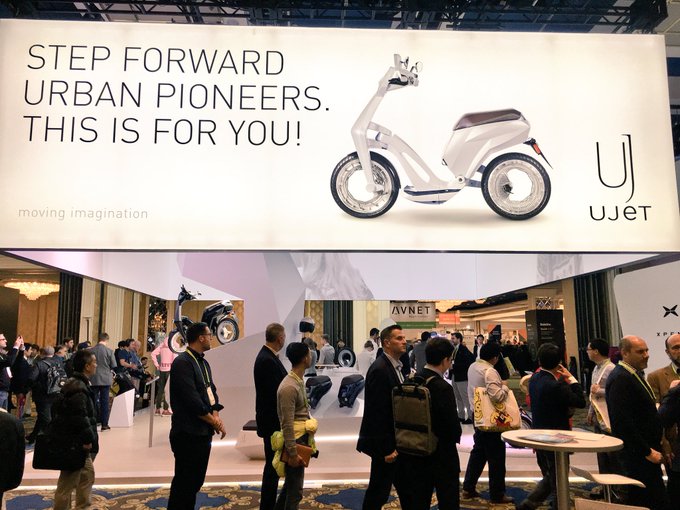 As Shawn notes, there is some attention being paid to e-bikes at CES, and in the light of all the hype about AVs I thought perhaps we should have another look at this issue. In a podcast on Techchrunch, Bicycles, e-bikes and the slow-burn disruption of cities, Horace Dediu paraphrases Marc Andreessen on software and says “Bikes have a tremendous disruptive advantage over cars. Bikes will eat cars.” Dediu also told CNN tech that notwithstanding the huge investment going on in electric and self-driving cars right now and the attention they are getting everywhere, the bicycle will own the future.

The bikes’ flexible nature will aid their popularity. You can park a bicycle in your home or your office. A bike can be carried on a bus, car or train. A car doesn’t offer this versatility. A similar case of disruption played out with cameras, as the always-in-your-pocket nature of smartphones helped them leave traditional cameras in the dust.

Dockless bike shares, particularly newer e-bike versions, will add to this disruption; you don’t even need to think about ownership and parking. But as noted in an earlier post about self-driving cars, you cannot think of the bike on its own; it has to be part of a larger system of safe bike routes and decent bike parking.

In fact, in Carlton Reid’s “Roads were not built for cars”, one learns that roads were paved for bikes in the bike boom of the late 19th century, and then the cars pushed the bikes out.

Now, with the electric bike, the reverse may be happening. According to the New York Times, 35 million e-bikes will be sold this year. Claudia Wasko of Bosch says e-bikes have taken off in Europe because “they are viewed not just as recreational vehicles but as a practical transportation option.”

In most European cities, e-bikes are faster than cars. You do not have to work as hard or get as sweaty so they work in hot environments, and you can bundle up for the ride in colder cities. New bikes are being designed that are safer and easier for older riders (another story coming soon). From the Times:

E-bikes can enhance the cycling experience for all kinds of riders, from novices to committed commuters who want to extend their routes without affixing at the office soaked in perspiration. The technology also encourages owners to ride more often, safe in the knowledge that they can get a boost should they encounter steep hills or become fatigued far from home.”

Perhaps we should just make everything out of plastic./Promo image

Of course, it is so American… to want something better. But it is becoming more and more clear that if we are going to have AVs we are going to have to essentially redesign our cities and rewrite our laws to suit them. When I think of Kris de Decker’s discussion of sufficiency versus efficiency, I wonder how much metal and embodied energy do people need to go a couple of miles.

Perhaps instead of being so obsessed with making the world safe for autonomous cars, we should be concentrating on making them safe for bikes and e-bikes; they are going to carry a lot more people a lot sooner