A study comparing the two countries shows vast differences in how cars are used.

The modern highway was invented in Germany, and Germans love their cars. Daimler, Volkswagen and BMW make rather nice ones. But as Eric Jaffe of Citylab notes,

Compared to Americans, Germans own fewer cars, drive them shorter distances and less frequently, and walk and cycle and ride transit more often. They have slimmer waistlines to show for their active transport habits and suffer fewer traffic deaths whether in a car or not. They spend less household income on getting around even as they pay much more in driving costs. They use less energy per person on ground transport, resulting in lower carbon emissions.

He is mining a study comparing Washington DC to Stuttgart by Ralph Buehler of Virginia Tech and associates in Germany (behind a very expensive paywall) and shows the data all in on one big chart, and it is really interesting; the Germans own 585 cars per 1000 of population, compared to the Americans at 766; they travel about half as far in them. See the whole chart here.

But the most remarkable differences are in the safety and health statistics.Traffic fatalities are less than half, but look at the pedestrian and cycling fatalities, a fraction of the USA. Jaffe explains some of the reasons:

National policy differences have clearly driven the driving gap. Germany has a tradition of coordinating transportation and land use efforts toward policy goals that stretch across levels of government, such as reducing sprawl, cutting emissions, and promoting public transit. Its narrow zoning laws are better suited to transit-oriented, mixed-use development, and in recent decades it’s made a strong push at the federal level to fund transit initiatives.

It is really all about decisions made at the government level, mostly related to urban planning; in the USA after the second world war, it was official policy to decentralize everything to make the nation safer from Russian missiles. There was a National Dispersion Policy that had the aim of “reducing population and building densities in residential areas of greatest vulnerability by adoption of program of urban redevelopment and slum clearance.” Shawn Lawrence Otto, writing in Fool Me Twice, wrote:

These accommodations for defense brought about an immense change in the fabric of America, altering everything from transportation to land development to race relations to modern energy use and the extraordinary public sums that are spent on building and maintaining roads— creating challenges and burdens that are with us today, all because of science and the bomb.

In the USA after the war, they destroyed cities by dispersing industry, business and the white population; in Germany, they rebuilt their cities, at different rates in the west and the east, but rarely around the American dispersed model. The result is that they were dense enough to support transit and bike infrastructure and they didn’t ignore the pedestrian.

I was in Berlin last year and found that public transportation could take you anywhere, and that when you were on a bike you were treated with care and respect by the drivers, even when there were no bike lanes. I am off to Munich tonight for the International Passivhaus Conference, and will have my camera out to see how it compares.

Compared to Americans, Germans own fewer cars, drive them shorter distances and less frequently, and walk and cycle and ride transit more often. They have slimmer waistlines to show for their active transport habits and suffer fewer traffic deaths whether in a car or not. They spend less household income on getting around even as they pay much more in driving costs. They use less energy per person on ground transport, resulting in lower carbon emissions.
So yeah. All the ways.

The data come from a recent comparison of German and U.S. planning approaches led by transport scholar Ralph Buehler of Virginia Tech. Drilling down to the city level, Buehler and collaborators find more of the same driving trends in an analysis of two large metros from each country: Washington, D.C., and Stuttgart.

Both areas have similar economies, labor markets, core populations (roughly 600,000 people), regional planning organizations that outline local transport policies. Yet Stuttgart comes off as less car-reliant than D.C. on all sorts of measures. We’ve bulleted some of the highlights:

What’s especially notable here is that driving behavior in the remote periphery of Stuttgart is about the same as it is in the suburbs of D.C. To wit: the two most car-dependent suburbs of Stuttgart (Nürtingen and Geislingen) have shares of all trips by car roughly equivalent to the two least car-dependent suburbs of D.C. (Arlington and Alexandria): roughly 70 to 75 percent in each place. Meanwhile, walking and cycling account for 6 percent of trips in most D.C. suburbs, while in Stuttgart’s most car-oriented areas these modes still account for more than a fifth of all travel.

So the suburbs of D.C. are basically as car-oriented as the cow pastures of Stuttgart. The map below lays it out pretty clearly:
National policy differences have clearly driven the driving gap. Germany has a tradition of coordinating transportation and land use efforts toward policy goals that stretch across levels of government, such as reducing sprawl, cutting emissions, and promoting public transit. Its narrow zoning laws are better suited to transit-oriented, mixed-use development, and in recent decades it’s made a strong push at the federal level to fund transit initiatives.

The United States, meanwhile, tends to have a more fragmented approach that makes it tough to shift travel behavior at large. Policy goals are largely local in character and as a result can vary dramatically from place to place within a metro area: Arlington, Virginia, has promoted strong TOD, for instance, while nearby Fairfax County has tended to build parking lots beside rail stations. And while the D.C. metro area has done more than most in the U.S. to integrate fare payment methods across jurisdictions, it’s still nowhere near as uniform as Stuttgart.

The suburbs of D.C. are basically as car-oriented as the cow pastures of Stuttgart.

But with all those differences in mind, Buehler and company did identify two localities in each case that have successfully reduced car-dependency in a similar manner: Arlington’s Rosslyn–Ballston corridor just outside D.C., and Ostfildern’s Scharnhauser Park area in Stuttgart. The researchers point to four development features common to both places:

Given all the other planning variables across the two countries, these four matching policy elements might offer something of a universal blueprint to reducing car-dependency. Though it’s a blueprint some places need to follow more closely than others. 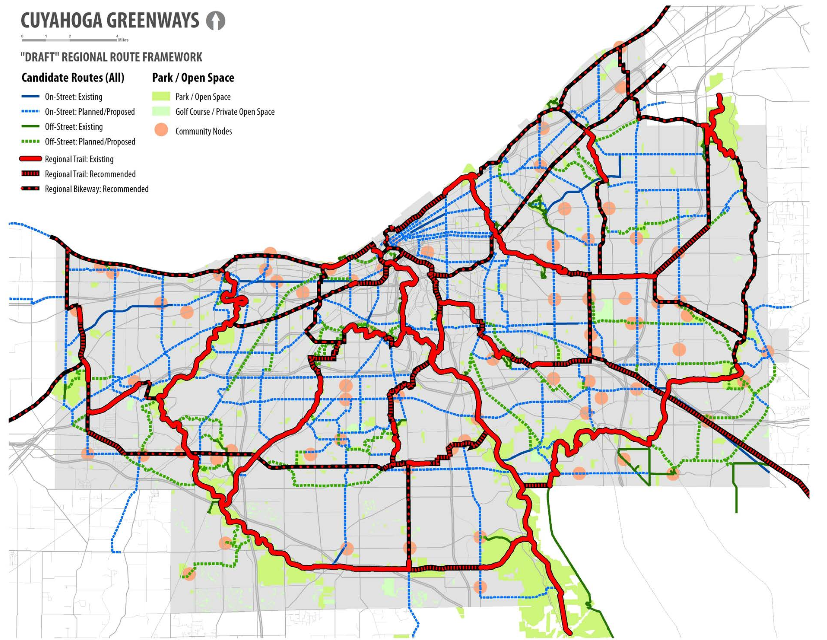 The ultimate goal of the Greenway Plan is to connect Cleveland to 59 other cities by bike and walking trails. (Photo courtesy Cuyahoga Greenways)

Last year, Cleveland Metroparks celebrated its centennial. For the past 100 years, the agency has been implementing founder William Stinchcomb’s vision for an “emerald necklace” of green space ringing Cleveland. Today, Metroparks manages 23,000 acres of parks and green space. Now, the agency, along with the Cuyahoga County Planning Commission and metropolitan planning organization NOACA, wants to expand on the emerald necklace with a new network of greenways and bike infrastructure connecting Cleveland’s parks with each other and with the 58 other cities and towns in Cuyahoga County.

If fully implemented, the Cuyahoga Greenway will eventually include hundreds of miles of linear parks with biking and walking trails as well as on-road bike lanes to provide more connectivity.

“We’re building off the excitement of the centennial of Metroparks, to think about what the next century will look like,” says Glenn Coyne, Cuyahoga County Planning Commission executive director. “We’re really thinking about how we connect the rest of the county with a system of greenways and regional trails that not only link into the emerald necklace and provide access to lakes and parks, but also connect inner and outer ring suburbs.”

The Greenway is still in the early planning stages. The planning commission is working with a consultant and hosting community meetings to establish the ideal routes for the greenway. Once they figure out the where, they’ll determine whether a dedicated trail or a bike lane is best for a given location.

Coyne says the fundamental goal of the trail and bike lane network is to encourage more people to bike. “The local communities are very interested in alternative forms of transportation. We don’t want to get in our car and drive everywhere. This is an effort to think about how can we use walking, biking and transit to get around and link up our communities.”

He continues, “We’ve emphasized all along that this is not just for the spandex commuter folks. It’s for everyone. Safety is a big concern.”

Unsurprisingly, bike advocates are encouraged by the possibilities of a bike network that connects the dots.

“It’s really exciting to have agencies thinking about connectivity on a much larger scale across the county,” says Jacob VanSickle, Bike Cleveland executive director. “Cleveland has done a good job over the last four to five years building out bikeways and trails, but in a lot of instances they don’t connect people anywhere. As you build out a connected network, you start to see more people out riding that you wouldn’t have previously seen because it’s a safe place to do it.”

Bike Cleveland focuses primarily on advocacy within Cleveland city limits. They are working with the city to update the Bikeway Master Plan, which they are pushing to include more protected bike lanes and center-running bike lanes that repurpose former streetcar lanes. The city population is currently less than half its 1950’s peak, leaving lots of space on its wide, auto-centric boulevards for protected bike infrastructure.

Bike Cleveland is also working with Rails to Trails Conservancy to do a connectivity analysis to determine gaps in their network and ideal locations for low-stress bike infrastructure. VanSickle says both the master plan and connectivity analysis should intersect well with the Greenway plan to improve biking conditions in the city and county.

Funding is always a challenge for implementing something like the Cuyahoga Greenway. Coyne says the number of governments involved in the Greenway’s implementation adds a unique difficulty. “Almost the entire county is incorporated as 59 cities,” he explains. “They all have their own home rule and authority for regulations and planning in community.”

Coyne says the planning commission is working now to gather input from all the communities in an effort to get buy in early. One of goals with the Greenway Plan is to have it act as a master list of projects that get integrated with local municipalities public works projects. Coyne says, “We’ll be able to build the greenway incrementally. As municipalities repave a road and build new developments, we can get these trails and bike lanes in.”

The Cuyahoga Greenway is still a long way from reality. Coyne points out it took decades for Metroparks to complete the 1917 emerald necklace vision. The planning commission is shooting for completing its final greenway plan this July.