Utilities and solar companies have long had a strange relationship. On one hand, they compete over compensation for customers wanting to put solar on their roofs, and on the other, they partner to provide solar energy from utility-scale projects to thousands of customers. But the two sides have been figuring out how to work more closely together lately — particularly on the utility side.Now, solar companies are adapting their entire business models to be key suppliers to the utility industry. Here’s what that future might look like. 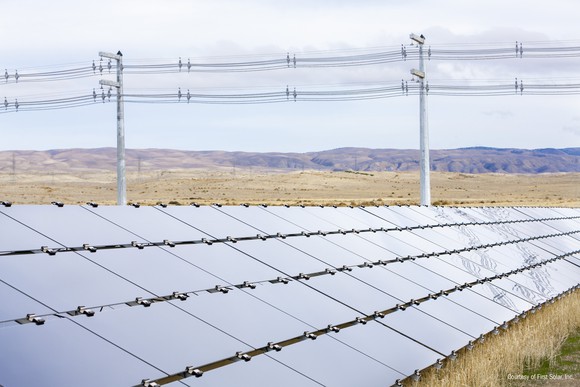 How solar and utilities work together

Early in the solar industry’s development, solar companies would develop projects and sell energy to utilities through power purchase agreements. Sometimes the developer would be a solar company itself, like First Solar (NASDAQ:FSLR), SunPower (NASDAQ:SPWR), or Canadian Solar (NASDAQ:CSIQ), which used the projects as a way to vertically integrate their businesses. And they hoped to own projects long-term through yieldcos like 8point3 Energy Partners (NASDAQ:CAFD).

Eventually, investors discovered that solar companies may not be the best project owners, or even developers. They didn’t have the lowest cost of capital once the yieldco market collapsed so there was no advantage for them to maintain ownership. And as development timelines shrunk, it made more sense for solar companies to provide technology and components to utilities, who would be the eventual project owners. First Solar CEO Mark Widmar put it like this on the company’s first-quarter conference call:

“The other thing I want to make sure is also understood is the — part of the reason here is particularly in the U.S. is we are starting to see more of a market opportunity for utility-owned generation. And I still do believe that in the U.S., the ultimate owner of these assets will potentially evolve to be the utilities.”

How this changes the game for solar companies

Providing components actually simplifies the business model in solar. Their core competency can now be building solar panels and designing the components around them. First Solar has done that with its Series 6 product that can include everything from racking to inverters to energy storage. SunPower is doing the same with Oasis, a platform that involves using a drone to survey the land and lay out solar systems to build trackers and solar panels.

Instead of trying to develop a small number of projects on the balance sheet, tying up capital in the process, solar companies try to expand the customer base and sell more in the process. By broadening the customer base, they can sell 5 GW or 10 GW annually, rather than developing 1 GW or 2 GW themselves each year.

This allows solar panel manufacturers to recycle capital more quickly and potentially make more money, even if they have lower margins. For example, if SunPower developed 1 GW of projects annually and made a $0.40-per-watt margin, it could generate $400 million in gross margin per year, barely enough to pay $350 million in operating costs. On top of that, development involves all sorts of potential problems, including interest rates variability, currency fluctuations, and counter-party risks that solar manufacturers may not want to take. If SunPower can expand to making 5 GW of Oasis sales per year (see SunPower’s rumored 5 GW expansion in China), but make a $0.20-per-watt margin on each sale, it would have $1 billion in gross margin with the same operating costs.

First Solar is planning a similar model and already has around 3 GW of production in its pipeline, with the ability to add more if demand is there. The key to the component-supply model will be building scale quickly and squeezing out other competitors, something neither First Solar nor SunPower has done well recently.

Solar and utilities, together at last

The advantage for utilities is that they’ll be able to build solar projects with essentially turnkey solutions from solar companies. NextEra Energy did this with a 125 GW contract with SunPower earlier this year, and First Solar is becoming more of a partner rather than competitor as well. Canadian Solar may also follow suit.

Long-term, as the solar industry consolidates, the component-sales model could be a highly profitable way for companies to grow. SunPower and First Solar are leading the way, so keep an eye on whether their financials improve as they implement this new business model and become partners of the utilities they once competed against.