Mission Solar to double solar module manufacturing – The move by Mission to add more module lines follows on its announcement shortly after the Section 201 decision that it was hiring 50 workers so as to reach its full 200 MW of module capacity. It also follows on the company securing a supply contract with PetersenDean Roofing and Solar. There are definite expansions of solar panel manufacturing in the USA. ITEK, Solaria, Solartech Universal and First Solar – are the pure American plays – with a Tesla/Panasonic hybrid in Buffalo. CSUN and Jinko – international groups – have also announced expansions within last year. Interestingly, SunPower is holding off a US based expansion as leverage to not tax its imported products. The numbers of jobs aren’t huge in the factory directly, but there are jobs at partners and suppliers that aren’t easily accounted for.  An evolving – growing – market.

A New Lithium-Metal Battery Takes Flight in Drones – SolidEnergy System’s energy storage innovation is packed into a thin lithium-metal foil for the negative electrode, replacing the graphite that is commonly used in lithium-ion batteries. The company’s batteries also use a semi-solid material for the electrolyte, replacing the flammable liquid usually found in lithium-ion batteries. The two-part breakthrough creates a battery with an energy density of 450 watt-hours per kilogram and 1,200 watt-hours per liter. The key item here – 450Wh/kg and 1,200Wh/liter – that’s more than double the 200Wh/kg and 20-50% greater than the 800-1000Wh/liter that Tesla might be at. More energy per weight is huge – you’ll need to expend less energy to move your energy. And of course a density increase of up to 50% means a huge amount of energy in a smaller place. That’s a breakthrough if I’ve ever seen one.

New NREL Method Reduces Uncertainty in Photovoltaic Module Calibrations – The financial impact of each additional 1% uncertainty in module power is up to $3.5 million USD for each 1 gigawatt of production at a module sales price of $0.35/watt. In NREL’s Cell and Module Performance group, we recently developed a new procedure for measuring the power of commercial crystalline-silicon photovoltaic modules that reduces the uncertainty in module maximum power (Pmax) to ±1.1% (k=2 coverage factor). Whenever you buy a solar panel it gives you a ‘peak wattage’ rating – that’s its peak energy production potential. This number always has a plus or minus wattage next to it – better panels only have a + rating (plus or minus 3 to 5 watts is industry standard). If we start to consider the minus side across GW – we start seeing millions of dollars in losses.

Swedish steel plant to run on hydrogen – Steelmaker SSAB plans to build the world’s first fossil fuel-free steel plant powered by hydrogen. The idea behind the project, called HYBRIT, is to use hydrogen, produced with electricity from fossil-free Swedish sources. The emissions would be water. If successful, the technology could eliminate its greenhouse gases which accounted for 10 percent of Sweden’s carbon dioxide emissions and 7 percent of Finland‘s, Karsberg said. There is a significant amount of pollution that is created in our industrial processes – processes that don’t use electricity. For instance, making concrete means you must first create cement – and making cement involves heating materials up to 1400°C.  The material is heated by an oil byproduct – coke. In the end, delivering concrete structures to the world creates at least 5% of global CO2 emissions. In this article, we see that steel production represents 10% of Sweden’s CO2. An important part of electrifying the whole planet – moving from burning anything anywhere – will involve these manufacturing processes. This first plant is really exciting to learn about.

From a procedural point of view, rejection of Northern Pass was unusual – Northern Pass is the powerline Massachusetts hopes to build connect to Quebec’s hydroelectricity. It was voted down in New Hampshire quite unceremoniously (see the article) – but I wanted to point out something more than just this powerline. The solar power industry – and wind industry – would greatly benefit from a nationwide HVDC powerline system. Texas is absolutely benefiting from its HVDC powerlines moving cheap wind and solar south and east…but we the people have shown a strong ‘not in my backyard’ mentality with these large-scale powerlines. Now, in contrast to this point – I do see a new technique arising that could solve this issue: Undersea Interconnections. East-West is going to be a challenge – but going through and over the water is a lot easier…maybe a powerline between Texas and Florida? New York and Florida? Southern California and Vancouver?

From the Tweet below – Germany has seen their renewable energy sources pass coal in terms of total electricity production. I question the inclusion of biomass in these charts as it seems there is much contention as to whether our current biomass techniques are netzero CO2 – or have a possible path to approach this. Either way, wind and solar are still growing strongly and total coal is down. Good work Germany. 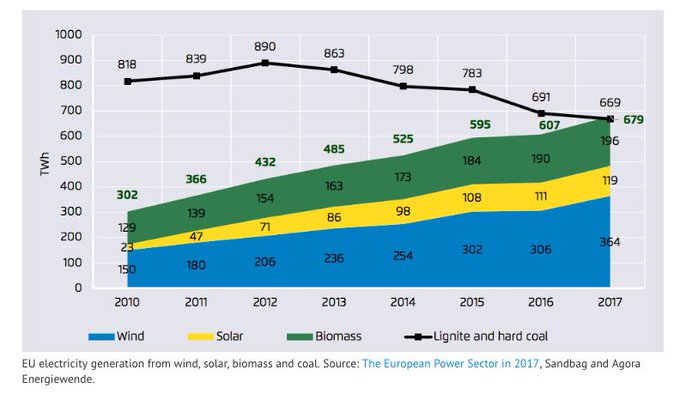 Featured image is from the Department of Energy SunShot program. Heliostats and the rising sun at Solar Reserve’s Crescent Dunes facility in Tonopah, NV. Photo by Ivan Boden.

Considering residential solar? Understand Solar will connect you with local contractors, Tweet Me an I’ll give you some feedback or allow me to give you a professional residential consultation that will save you money.

For more electric vehicle, autonomous transport and clean technology news, make sure to follow us on Twitter, Newsletter, RSS or Facebook to get our latest articles.