Coal should be outlawed/kept in the ground. Solar and wind power should be doubling year over year as we race against time to become carbon neutral. We should be putting a moratorium on petroleum-fueled cars and industry.

The 2019 US energy flowcharts released by Lawrence Livermore National Laboratory (LLNL) came out last night, and there are some notable changes and things we should discuss.

The numbers below represent “quads” or quadrillion BTUs, with the total consumption totalling 100.2. Conveniently, you can pretty much interpret the below numbers as a percentage of total US energy usage.

That’s significant. Compare to 2018 below and you can see:

If you look at the right sides of the graphs above and below, 100% of the overall usage decline was in “Rejected energy” (more on that below), which means we are getting more efficient with our energy. But we still have a long way to go. 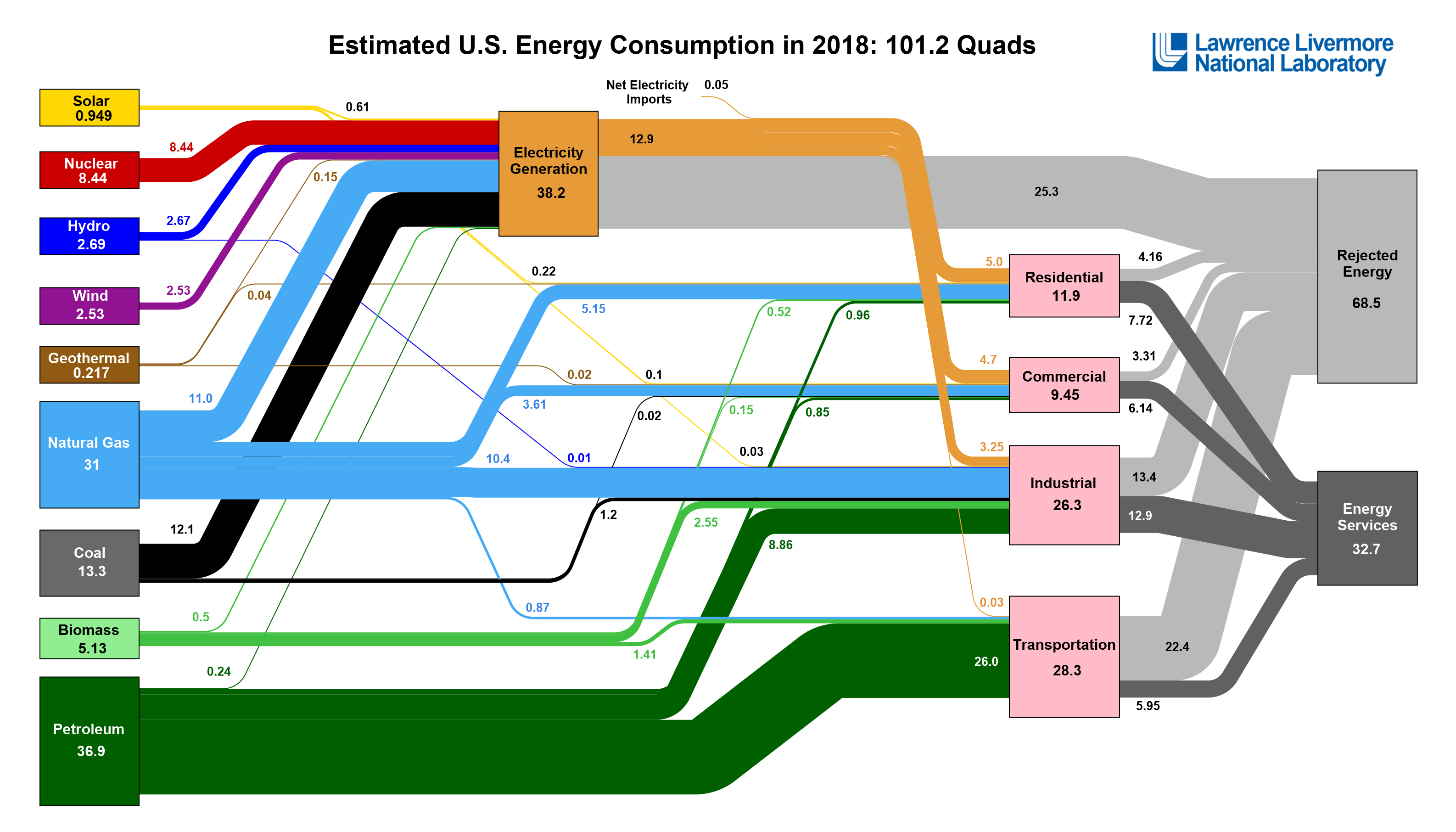 Rejected energy is still over 2/3 of production

The biggest shock to most people is that over two-thirds of energy produced in the US is “rejected.” What does that mean? A good primer:

Rejected energy is part of the energy of a fuel — such as gas or petrol — that could be used for a purposeful activity, like making electricity or transport. However, because of the technologies that we currently use to consume fuels, a lot of it gets tossed out by turning it into heat in the environment, which is totally useless [or worse]. For a coal-fired power station, for instance, about two-thirds of the energy released when the coal is burnt is discarded as heat in the environment. This reject energy sometimes appears as clouds of vapor coming off a power station’s cooling towers, such as the well-known ones at Didcot in England.

Coal, for instance, produces a lot more unused heat byproduct compared to natural gas. By moving a significant amount of energy production off of coal and onto other energy sources, the US saved a quadrillion BTUs of energy but got the same energy services out of it.

3. Transportation is the biggest and most wasteful sector

Small internal combustion engines are one of the most wasteful forms of energy production, and they make up almost all of the transportation in the US. That is reflected in the overwhelming amount of rejected energy coming out of transportation. Almost all energy going into transportation currently is in the form of petroleum, and yet those internal combustion cars and jet planes are mostly producing heat and very little relative energy, to the tune of 1 unit of energy per 4-5 units put in. That’s 20-25% efficiency. Compare that to an EV, which is over 90% efficient.

Which brings me to my next observation.

4. You don’t need a 1:1 ratio of electric to replace petroleum. That ratio is more like 1:5

The whole US transportation industry uses only 5.93 quads of energy to propel vehicles around. While it takes 28.3 quads of mostly petroleum to do so today, replacing internal combustion or jet engines with their much more efficient electric alternatives means you’d only need about 6 quads of electricity to produce the same movement. That can currently be made by wind, solar, or hydro (if they weren’t doing other things).

To put it another way: to get rid of all of the petroleum energy used to run transportation in the US, you wouldn’t even have to double the amount of wind, solar and hydro.

The biggest piece of rejected energy (24.2 quads) comes from electricity generation. A lot of that is excess heat from coal and to a lesser extent gas-powered turbines. As utility-scale batteries from Tesla and others start to come online, fewer less efficient coal and gas peaker plants will be necessary. We already saw a 1.1 quad drop from 25.3 quads a year ago, while the service energy only dropped from 12.9 to 12.7 quads.

Other efficiencies like creating energy closer to its use point (solar/wind) and higher voltage or DC transmission lines will reduce resistance in wires. Better turbines and inverters and smarter grid usage will shave off heat losses as well.

6. Wind and solar increased significantly but have a long way to go

As far as renewables are concerned, wind is about 2.5x solar currently and growing slightly faster. What’s great about renewables is that they are close to 100% efficient. So for every BTU gained, more than 1 BTU of fossil fuel is offset.

“Solar and wind continue to show year-on-year growth, which is an impressive change for the energy system,” said AJ Simon, associate program leader for Water Security and Technologies at LLNL. “Other energy resources, such as hydropower, nuclear energy and geothermal have trended flat over the past decade, despite visible annual fluctuations.”

If there is one decisive loser in this graphic, it is coal, with a decrease of 14% in just one year. It is the least efficient at the power generating point and also the worst for carbon production per watt. Coal was down 5% last year and it looks to be down again next year as more and more coal plants are replaced by gas — or even better, solar and wind.

Biomass, or basically burning wood and other plant material, has fallen out of favor recently economically because biomass produces more emissions and is more expensive than a comparable natural gas plant. However, proponents will say that a fallen tree will release its CO2 regardless if whether is on the ground decomposing or in a furnace. So why not make some energy?

In small amounts (for instance using fallen trees to heat homes), biomass makes a lot of sense. However, the scale at which it is being used in Europe from trees in the southeastern US is unsustainable. Here’s a short flick on the subject:

The US is moving in the right direction, but way too slowly, and with a hostile political administration slowing us down. Coal should be outlawed/kept in the ground and replaced by biomass in the short term.

Coal should be outlawed/kept in the groundSolar and wind power should be doubling year over year as we race against time to become carbon neutral. We should be looking at more tidal and hydro plants around the US and putting a moratorium on petroleum-fueled cars and industry.

This flowchart shows us what we need to do. Climate scientists show us when we need to do it (yesterday). The time to act is now.