Some of the most interesting climate developments in the world are unfolding in the United Kingdom.  In fact, this week, the UK moved several steps closer to becoming the first G7 country to commit to net-zero carbon emissions by midcentury.

For the UK to emerge as a global climate leader is somewhat puzzling. Like the US, it is undergoing a white rural backlash, yielding the almost-as-ignorant-as-electing-Donald-Trump Brexit vote late year. It has been under conservative rule since 2010. And yet climate policy is moving forward in the country in what appears, to this American’s eyes, an almost surreally sensible fashion. (Admittedly, we Americans have a low bar these days.)

Let’s start with a brief primer on UK climate policy to date.

The UK is already committed to 80 percent reductions by 2050

In 2008, the UK Parliament passed the Climate Change Act, which committed the UK to reducing its emissions 80 percent from 1990 levels by 2050. The act created the Committee on Climate Change (CCC), an independent panel of climate change experts, to advise the government and produce regular reports and assessments. And the act required that the government establish targets (“carbon budgets”) every five years along the way.

So how’s it going so far? The short answer: great in the short term, uncertain in the long term.

Coal is undergoing a spectacular collapse in the UK. It’s not unlike what’s happening in the US, only even spectacular-er — consumption is down 74 percent since 2006 and fell 52 percent in 2016 alone. After another 19 percent drop in 2017, coal use in Britain is now at its lowest levels on historical record.

Fun fact: On April 21, 2017, National Grid (the UK’s grid manager) reported that the country’s energy system had gone its first full day without any use of coal since the Industrial Revolution.

National Grid can confirm that for the past 24 hours, it has supplied GB’s electricity demand without the need for #coal generation. 4:11 PM – Apr 21, 2017

The government recently vowed to close all remaining coal power plants by 2025.

Thanks to the decline in coal, overall emission reductions in the UK averaged an annual 6 percent over the past three years, which is about as fast as any industrialized country has ever reduced emissions in the post-1990 world. British emissions are now lower than they’ve been since … wait for it … 1890.

Nonetheless, the UK is not on track to hit its midterm targets

The collapse of coal allowed the UK to fairly easily hit its early and near-term carbon targets. But that strategy is running out of juice — there are only so many coal plants to close.

Speaking of the fourth carbon budget, late last year, the UK government published its long-awaited Clean Growth Strategy, a set of policies meant to cover the fourth (2023-’27) and fifth (2027-’32) carbon budgets. By the end of the fifth budget, UK emissions must be down 57 percent from 1990 levels to stay on track for the 2050 target.

CarbonBrief has a deep dive on the plan if you want details. It’s pretty ambitious, but according to the CCC, it is not enough. Even if all the policies pay off as hoped (an optimistic outlook), there remains a significant gap between policies and targets.

Some of the dispute is over flexibility. The UK government wants to bank the overdelivered emissions of the first three budgets and pay them against the fourth and fifth. The CCC says those banked reductions should instead go toward increased ambition. And that is where things currently stand. Meanwhile … [cue transition music, fade]

Big move as UK becomes first country to move towards a “net zero” emissions target. The only problem is it isn’t yet on track to meet the targets it already has. https://t.co/wFjqQ2e42f pic.twitter.com/li7ChsRp4m

In Paris, the countries of the world did not just agree to limit the rise in global average temperature to beneath 2 degrees Celsius. They also agreed to make efforts to limit temperature to 1.5 degrees, a considerably more ambitious undertaking.

The standard 80-percent-by-2050 target that most developed nations use is not going to get us to 1.5 degrees. That target is based on a model with a 50-50 chance of staying under 2 degrees.

Models designed to show a likely (66 percent) chance of hitting 1.5 degrees all show the same thing: The UK, along with the rest of the developed world, needs to reach net-zero carbon emissions by midcentury. (Net zero means carbon removed from the atmosphere balances carbon added, theoretically through the use of negative-emissions technologies, which the CCC says the UK will definitely need.)

In 2016, UK energy minister Andrea Leadsom told Parliament: “The government believes that we will need to take the step of enshrining the Paris goal for net zero emissions in UK law. The question is not whether but how we do it.”

Since then, there has been no such enshrining and David Cameron was replaced as prime minister by Theresa May, so it’s not been clear how real that commitment is.

Turns out, there’s some news on that front!

This week, the UK submitted the Clean Growth Strategy to the United Nations as part of the Paris agreement’s communication of long-term strategies program, wherein countries (26 so far) submit their strategies to reach 2050 targets.

In her cover letter with the submission, UK climate minister Claire Perry wrote: “The UK will need to legislate for a net-zero emissions target at an appropriate point in the future to provide legal certainty on where the UK is heading.”

There was no firm commitment or guarantee, nor any definition of “appropriate point in the future.” But at a side event earlier in the day, Perry said that after the IPCC releases its big report on 1.5 degrees (expected in October), the UK government plans to ask the CCC to analyze what the 1.5 degree target would mean for Britain. 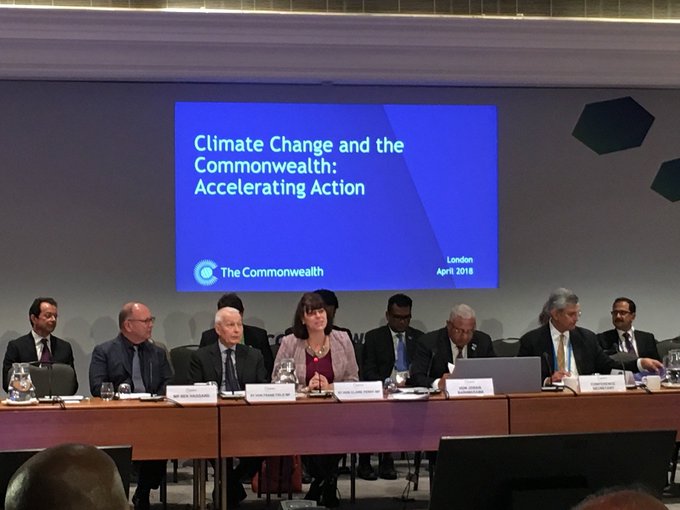 .@claireperrymp :”I am pleased to announce that after the IPCC report later this year, we will be seeking advice from the UK’s independent advisers, the Committee on Climate Change, on the implications of the Paris Agreement for the UK’s long-term emissions reduction targets.” 4:05 AM – Apr 17, 2018

Everyone knows what the CCC is likely to find. It was previewed in a big report from the London School of Economics released last month. That report found that to bring its targets in line with the Paris agreement, i.e., to do its part in a real effort at keeping to 1.5 degrees, the UK must commit to net-zero carbon emissions by midcentury.

The UK government has typically taken the CCC’s findings and recommendations to heart, so if the CCC recommends net zero, the likelihood of it actually happening is radically increased.

The politics of net zero are complicated

It is early yet, and far from clear that the UK will actually pass the legislation necessary to revise the Climate Change Act’s target to net zero by 2050. There are many fraught steps between here and there.

But the fact that the country is considering it, openly discussing it within the UNFCCC context, is a big deal regardless. New Zealand and Sweden have committed to versions of net zero, but no G7 country has yet. And eventually, they all need to. The UK has helped start that conversation, if nothing else.

Politically, the UK has some wind at its back.

Decarbonization enjoys an extraordinary degree of political consensus in Britain. I remind my American readers that it is the conservative party doing all this. Imagine if US Republicans, instead of bailing from the Paris agreement at the first opportunity, doubled down on it. (No, I can’t imagine it either.)

Meanwhile, the center-left party is endorsing a climate damages tax that will go to nations at risk from climate change, and the Green Party wants 90 percent carbon reductions by 2030. Though they vary in their ambition and policy preferences, every major UK party supports decarbonization.

And the public does too. A recent poll found that solid majorities of Britons of every stripe, including conservatives, support a net-zero target. 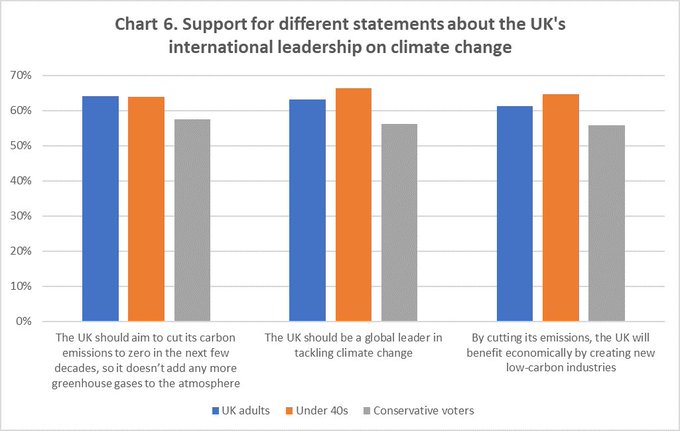 Sam Hall@samuelhall0
New analysis by @WeAreBrightBlue shows a compelling political case for today’s net zero announcement by @claireperrymp, with clear majorities of the public, including Conservative voters, in favour of a net zero target http://brightblue.org.uk/sam-hall-public-attitudes-to-uk-climate-leadership/ …

The political will is in place, but right now, net zero is just an idea. In practice, it will be extremely difficult (and contentious). It will certainly take more than coal dying.

If would require the UK to boost its near- and midterm targets, rapidly accelerate all existing decarbonization efforts, and take some politically unpopular steps like building giant carbon sequestration facilities.

It will require addressing the trickiest carbon problems: emissions from aviation, agriculture, biomass, and above all transportation, which in the UK (as in the US) is now the largest source of emissions.

“While emissions from energy supplies are down 57 per cent from [1990],” the Independent reports, “transport emissions are only down 2 per cent over the same period, making it the worst performing sector.”

According to the CCC, transportation emissions in the UK must fall 44 percent by 2030 to stay on track for long-term carbon targets. That will mean engineering a rapid electrification of the vehicle fleet — Britain has already announced it will ban diesel and gasoline cars from 2040 forward.

Suffice to say, many barriers and road bumps lie ahead for the UK as it enters the second phase of decarbonization (subtitled: Shit Gets Real). After coal fades, the country will begin the real hard work.

Even if it does defy political gravity and put a commitment to net-zero emissions into law, there’s no guarantee it will succeed.

But by acknowledging the need for net-zero emissions, the UK has opened up a long overdue conversation — one that ends, we can all hope, with humanity ridding itself of carbon fuels entirely.