On the left of the giant screen, the world’s 15 biggest public bike shares are ranked. Thirteen of them are in China. (Paris is No 5 with 21,000 bikes, and London No 12, with 16,500). Hangzhou – an hour west of Shanghai by bullet train – is slightly larger than London by population, but its share system is five times the size. It comfortably tops the table with 84,100 cycles, almost twice as many as its nearest rival.

In many other large Chinese cities, though, it’s not the sturdy, official public hire bikes that stand out. It’s the rash of brightly coloured “dockless” share bikes, haphazardly parked on the pavements in their thousands.

Dubbed “Uber for bikes”, they are the product of a whole host of new startups, aggressively competing for territory and investment.

The way it works is simple enough in theory. Users download an app that tells them where to find a cycle, which they unlock by scanning a QR code on their phones or using a combination they are sent. Unlike traditional rental services, however, which require bikes to be returned to a fixed docking station, riders are free to leave the bikes wherever their journey ends.

The scale is simply stunning. In less than a year, Mobike alone has flooded the streets of 18 Chinese cities with what is thought to be more than a million new bikes. Since last April, the company has placed more than 100,000 of their trademark orange-and-silver bikes in each of the cities of Shanghai, Beijing, Shenzhen and Guangzhou.

In just the three months of 2017, Mobike – co-founded by Hu Weiwei and Davis Wang, former head of Uber Shanghai – has launched in six more cities; Changsha, Hefei and Tianjin were added this past month. Already backed by the Chinese internet giant Tencent, a recent deal with Apple supplier Foxconn has doubled Mobike’s production capacity to 10m bikes a year.

Then there’s Ofo – which started in 2015 as a Peking University project and now claims 10 million users in 33 cities for its bright yellow bikes – and Bluegogo, Xiaoming and around a dozen more copycat firms, many of which have started up in the past six months.

Seven hundred miles to the south-west, on the streets of the fast-growing Pearl River manufacturing hub of Guangzhou, the colourful dockless share bikes are everywhere. They are parked up by the hundred outside shopping malls and metro stations, often blocking the pavement; others, rendered useless by missing saddles, broken locks or scratched off QR codes, are simply dumped in flowerbeds and bushes.

But after decades of decline – when a whole generation of Chinese, embracing economic freedom, worshipped the private car and saw cycling as backward – these sharing apps have clearly made cycling cool again in China. Most users appear to be in their 20s and 30s, many riding one-handed, smartphones glued to their ears. This popularity is new: the share of trips taken by bike in Guangzhou had dropped from above 20% in the late 1990s to around 5% a few years ago; Beijing’s cycle modal share had collapsed from a high of above 60% in the mid-1980s. No official estimates yet take account of the impact of these new share bikes, but there’s no escaping them on the streets of China’s big cities.

What’s more, they’re about to be exported worldwide. Mobike is launching in Singapore this year, while rival Bluegogo controversially started operations in San Francisco without official permission, Uber-style. (The city planning department issued warnings and could prosecute.) Ofo has a container of 500 bikes on its way to Cambridge, and there are rumours Mobike is targeting London, Birmingham and Manchester.

“In heaven, paradise; on Earth, Suzhou and Hangzhou,” goes an old Chinese saying. Hangzhou’s beautiful West Lake draws millions of tourists a year, who visit the nearby plantations growing Longjing green tea and soak up the peaceful provincial atmosphere.

That scenic reputation took a knock when the documentary Under the Domerevealed the city suffered more than 200 “smoggy days” in 2013. Hangzhou’s annual average concentration of deadly fine air pollution particulates, PM2.5s, was recorded at 66.1µg/m³ that year – more than six times World Health Organization guidelines. The city consistently places in the top 10 most congested in China, and in 2013 TomTom ranked it as the worst nationally and sixth worst in world. Most of the city’s PM2.5 pollution comes from vehicle emissions, a reflection of increasing incomes and surging private car ownership.

But public bike share, funded by the city, is seen as playing a crucial part, too. Zhang Li Qiang, the chief executive of Green Smart Traffic (GST), started China’s first public bike share in Hangzhou in 2009, inspired by Paris’s Vélib’ scheme. He claims his programme cuts fuel consumption by 100,000 tonnes a year (equivalent to around 135m litres of petrol and diesel).

“Hangzhou’s population is increasing by 200,000 a year and the roads are blocked,” he says. “But the historic centre means you can’t just knock down and rebuild, as happens in other parts of China. The public bike share cuts the burden of traffic and promotes an environmentally friendly approach among the people of the city. It’s a very effective way to solve the problem.”

Even in Hangzhou, though – with 3,000 docking stations spaced every few hundred metres – some new dockless share bikes are popping up, mostly provided by the smaller copycat firms. It seems people are prepared to pay the typical one yuan (around 10p) per hour fee for the convenience of being able to drop bikes where they want.

Not everyone is convinced dockless bike sharing is a good idea. Eric Mao, marketing manager at GST, believes the startups are too busy chasing territory and investment to focus on providing a good service: “It’s a big problem. You see thousands of bikes parked everywhere around the city and many are not working because nobody takes care of them – the city’s beauty has been destroyed.”

Tensions spilled over in Shenzhen earlier this year, when huge piles of share bikes began appearing in alleyways and vacant lots, dumped in their hundreds by persons unclear. Fingers were pointed at disgruntled motorbike taxi drivers, private security guards and even rival share bike companies. In Shanghai, by contrast, I witnessed a more ordered operation. There, users are encouraged to park dockless share bikes in marked bays, freshly painted on the ground: a simple rectangle of white lines and a bike icon.

The dockless companies seem to be taking the issue seriously. “We are working with local governments in every city we enter to deal with issues such as users parking in the wrong place,” says Mobike’s head of communications, Xue Huang, who points out that – unlike with public bike share – cities don’t pay them a single yuan. “In the Huangpu area of central Shanghai the government has hired maintenance workers at metro stations to call on people to behave properly and keep order. It is a user education process.”

That re-education in part relies on a new system of credits to reward good behaviour and punish bad. Mobike users start with 100 credits and can earn more by “informing” – by photographing and reporting badly parked bikes around the city. “Once verified by our staff on the ground, the spotter gets extra credit, while the perpetrator gets docked 20 points,” explains Huang. “If a user has fewer than 80 points, the costs of rental are set prohibitively high.”

If they can solve the parking problem, sustainable transport consultant Bram van Ooijen, who founded the Cycle Canton tours of Guangzhou, believes the dockless share bike startups are great for the cause of cycling and for China.

“Dockless bike shares have found a niche where they don’t have powerful enemies,” he says. “Ride apps like Uber and Didi Chuxing upset taxi drivers, who are a powerful lobby group that can hold protests and bring the city to gridlock. The only people who seem to be upset by the new share bikes, however, are illegal motorbike taxi drivers – who are missing out on business from metro stations late at night – and security guards, who don’t like mess on the pavement outside their buildings. There is friction, but the groups that are upset aren’t powerful enough. So the government doesn’t care.”

Meanwhile, urban planner Zhu Jinglu at the Institute for Transportation and Development Policy – which set up Guangzhou’s public bike share and runs its Bus Rapid Transit system – would be delighted if the anecdotal increase in cyclists led to better cycle infrastructure. Development consultant Li Shuling agrees, but is sceptical she will see changes any time soon. “Every development in the city has slogans about sustainability and green transport,” she says. “When thinking about a new road they will make some space for a cycle lane in the design, but it’s just a line on the page. When it is implemented you find the detail is poor. They just want to tick the box.”

Back in Hangzhou, public bike share company GST is not giving up on its classic docking stations just yet. CEO Zhang admits he is concerned by the popularity of dockless bikes, but points out drawbacks. 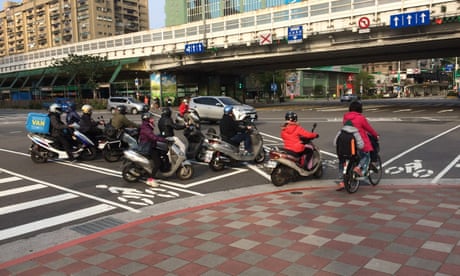 Return of the Bicycle Kingdom? How pavement cycling is transforming Taipei

“They have solved the problem of empty docking stations, but for them the big issue is the accuracy of GPS. Sometimes users search for a bike and it is not where their smartphone says it is – maybe it’s broken or behind a locked gate in a residential compound. That is not a good service. They don’t have maintenance teams like we do, they operate unofficially without government support, they are just chasing capital … it is an unsustainable model.”

Zhang, though, realises that with the backing of investors including Foxconn, Tencent and Didi, rivals such as Mobike and Ofo are not about to disappear. “They have problems to solve but they will find a way,” he concludes. “They are smart and they’ve got money.”

Then he shows me a video featuring a prototype of a dockless public share bike developed by GST. It uses a QR code, smart lock and GPS technology just like the startups. The new bikes will be trialled in Hangzhou; Zhang hopes they could play a part in GST’s first foray overseas, planned for this year. Discussions are under way with cities in Malaysia, Panama and Italy.

“We’re going to try new tactics,” he adds. “Both systems have virtues and drawbacks so we will integrate the two – docks and dockless – to get the best of both worlds.”

One way or another, it seems certain that in the near future dockless share bikes won’t just be flooding China.