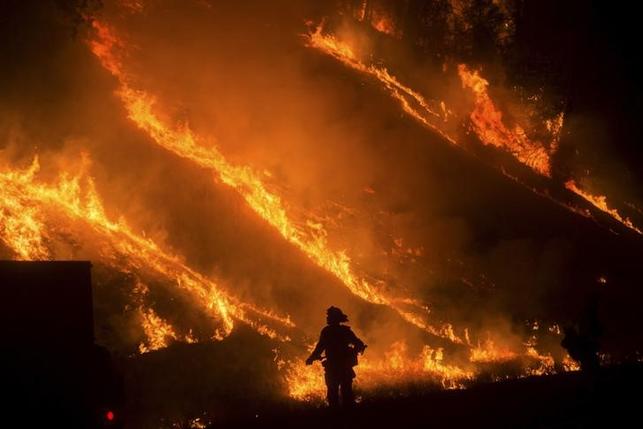 Flames from a backfire on Highway 29 rise above a firefighter battling the Valley Fire in Lower Lake, California September 13, 2015

The states of Alaska, California, Oregon and Washington were especially hard hit. The 2015 fires included more than 20 that topped 100,000 acres (40,500 hectares), the department said in a statement.

The area burned last year broke the 2006 record of 9.9 million acres (4 million hectares). The 2015 fires destroyed more than 4,500 homes and other structures and killed 13 firefighters, it said.

“We take our job to protect the public seriously, and recently, the job has become increasingly difficult due to the effects of climate change, chronic droughts, and a constrained budget environment in Washington,” Agriculture Secretary Tom Vilsack said.

He urged Congress to pass legislation to replace the method for funding firefighting which has remained unchanged for generations even as big fires are on the rise.

The Forest Service spent a record 52 percent of its budget on firefighting last year, up from 15 percent 20 years before. The Agriculture Department spent more than $2.6 billion to fight fires and had to transfer funds from forest restoration projects to battle blazes.

Firefighting costs reached a record $243 million in a one-week period during the height of fires in August, the statement said.